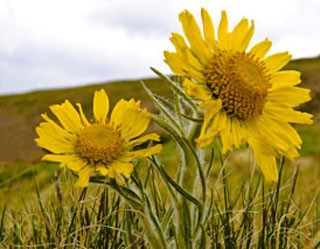 The absence of a single dominant bumblebee species from an ecosystem disrupts foraging patterns among a broad range of remaining pollinators in the system — from other bees to butterflies, beetles and more, field experiments show.

Biology Letters published the research, which may have implications for the survival of both rare wild plants and major food crops as many pollinator species are in decline.

“We see an ecological cascade of effects across the whole pollinator community, fundamentally changing the structure of plant-pollinator interaction networks,” says Berry Brosi, a biologist at Emory University and lead author of the study. “We can see this shift in who visits which plant even in pollinators that are not closely related to the bumblebee species that we remove from the system.”

“When the sunflowers became less crowded and more available, a broader range of pollinators chose to visit them,” Brosi says.

The field experiments, based in the Colorado Rockies, also showed that the removal of a dominant bumblebee species led to fewer plant species being visited on average. “That was a surprise,” Brosi says. “If a nectar resource is abundant and highly rewarding, more types of pollinators will go for it, leaving out some of the rarer plants that some of the other pollinator species normally specialize in.”

The findings are important since most flowering plants and food crops need pollinators to produce seeds.

“Basically, for almost every pollinator group that we have good data for, we’ve seen declines in those pollinators,” Brosi says. “The results of our field experiments suggest that losses of pollinator species — at a local population level or on a global, true extinction scale — are likely to have bigger impacts on plant populations than previously predicted by simulation models.”

The experiments were done at the Rocky Mountain Biological Laboratory near Crested Butte, Colorado. Located at 9,500 feet, the facility’s subalpine meadows are too high for honeybees, but they are filled with a variety of bumblebees and other pollinators.

The study included a series of 20-meter-square wildflower plots. Each was evaluated in a control state, left in its natural condition, and in a manipulated state, in which bumblebees of just one species had been removed using nets. The bumblebees were later released unharmed when the experiments were over.

The work built on 2013 research led by Brosi that focused on bumblebees and one target plant species, alpine larkspur. That study showed how removing a bumblebee species disrupted floral fidelity, or specialization, among the remaining bees in the system, leading to less successful plant reproduction.

For the current paper, the researchers looked at a system of more than 30 species of pollinators and their interactions with 43 plants species.

“There’s been a lot of observational research done on plant-pollinator networks,” Brosi said. “One of the general findings is that they have a really consistent structure. That tends to hold true almost irrespective of ecosystem and geographic area, from the northeastern coast of Greenland to tropical rainforests.”

Mathematical simulation models have suggested that plant-pollinator networks would have good resiliency if there is an extinction in the system, based on the assumption that the network structure would remain consistent.

“Our experiments show that this assumption is not tenable,” Brosi says. “These networks are dynamic and when a pollinator species is missing, we’re going to see both qualitative and quantitative changes. Future simulation models need to incorporate ecological processes like competition that can shape which pollinators interact with which plants.”