From The New Indian Express 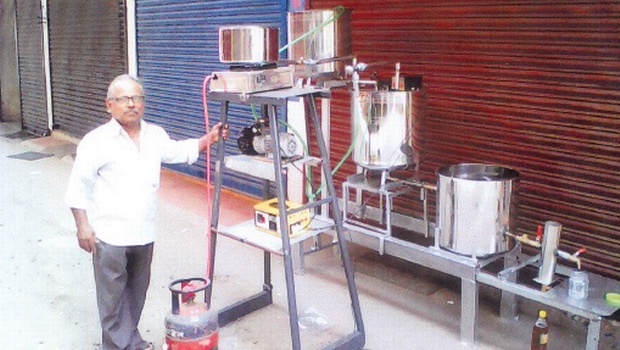 KOCHI: When rubber prices started going down, rubber farmers in the mountainous terrains of Kerala started tapping the nectar out of honey bees for a living. It didn’t take them time to realise that the business of bee keeping had the potential to yield a profitable business, export wise. But the farmers had one small problem. They were unable to store the honey for long periods of time, which proved a deterrent.

This hitch in the honey bee-making and cultivation sector in Kerala pushed 60-year old Joseph Pichanadu, an expert in honey bee keeping and a farmer himself to build a unique ‘honey processing machine’, claimed to be the first of its kind in Kerala. According to Joseph, the machine will allow farmers to process honey using the right amount of heat and water, a very important method which needs to be followed, if honey needs to be stored for a given period.

“Our farmers, whose bees source honey from rubber plantations, don’t have the right mechanism to process the honey (taken from extra floral nectar from rubber trees). They heat the honey at unscientific temperatures sometimes for hours, which shrinks the honey’s original water content and in turn spoils the honey. Also, there is the problem of excess water when honey is heated in boiling water which increases the content of water, reducing the taste of the honey,” he says.

Joseph’s expertise in honey bee keeping led him to be selected for a course by the Central Bee Research and Training Institute in Pune. “My aim was to study api-therapy where honey bees are used for treatment. However, it was there that I was introduced to the honey processing machine at the centre. Though I purchased one and brought it to Kerala, it did not prove to be successful for me. I sent them suggestions about the technology, which I learned later was incorporated in the machine.

Joseph’s processing unit makes use of steam instead of water where honey is boiled in optimal temperatures. A temperature recording instrument is attached to the machine, which allows farmers to keep track of the heat. It is processed in several boilers where the honey is finally extracted into a bottle.

“There are other sophisticated kinds of processing units available to farmers outside Kerala. However, a farmer in Kerala who cannot afford the machine would have to pay at least one or two lakh for the same,” says Joseph who adds that he is planning to sell his machine to the common public at `25,000 alone. Joseph adds that he does not wish to patent his product.

Joseph, a former government employee, lives in Kothamangalam with his family. He currently conducts awareness on bee keeping to farmers across the state in association with the Kerala Rubber Board. Joseph has visited several countries as part of his research, he adds.

Spring, Poultry, Bees This may be the May issue, but here in Medina County, Northeast Ohio it has been a Winter-like week. We’ve had…