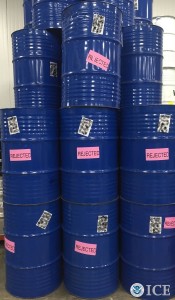 The 195 barrels of bulk honey found in three shipping container were falsely declared as originating from Vietnam to evade anti-dumping duties applicable to Chinese-origin honey.

Special agents with U.S. Immigration and Customs Enforcement’s (ICE) Homeland Security Investigations (HIS) acted after being told of the suspect honey by a domestic honey packer located in the Midwest.

CBP determined that the honey had a greater than 99% probability match with Chinese-origin honey.

HIS, which seized the illicit honey April 28, says the domestic honey packer who notified HSI of the suspect honey and the private laboratory whose reports were fraudulently altered are fully cooperating and are not targets in this investigation.

The investigation continues to determine where in the supply chain the private laboratory reports were altered for the honey.

“HSI and our law enforcement partners are committed to protecting the domestic honey market and U.S. consumers by aggressively investigating deceptive and illicit import schemes.”

The U.S. Commerce Department imposed anti-dumping duties in 2001 after determining that Chinese-origin honey was being sold in the U.S. at less than fair-market value. The duties first imposed were as high as 221% of the declared value. Later these duties were assessed against the entered net weight, now at $2.63 a kilogram, in addition to a honey assessment fee of 1.5¢ a pound on all honey.

In 2008, federal authorities in Chicago began investigating allegations of organizations circumventing anti-dumping duties through illegal imports, including transshipment and mislabeling, on the supply side of the honey industry.

The second phase of the investigation involved the illegal buying, processing and trading of honey that illegally entered the U.S. on the demand side of the industry.

In these multi-year investigations, HSI Chicago and the Department of Justice together convicted nine individuals (not including 10 remaining foreign fugitives) in a series of global schemes which evaded nearly $260 million in anti-dumping duties on honey from China and which also involved honey containing antibiotics prohibited in food.