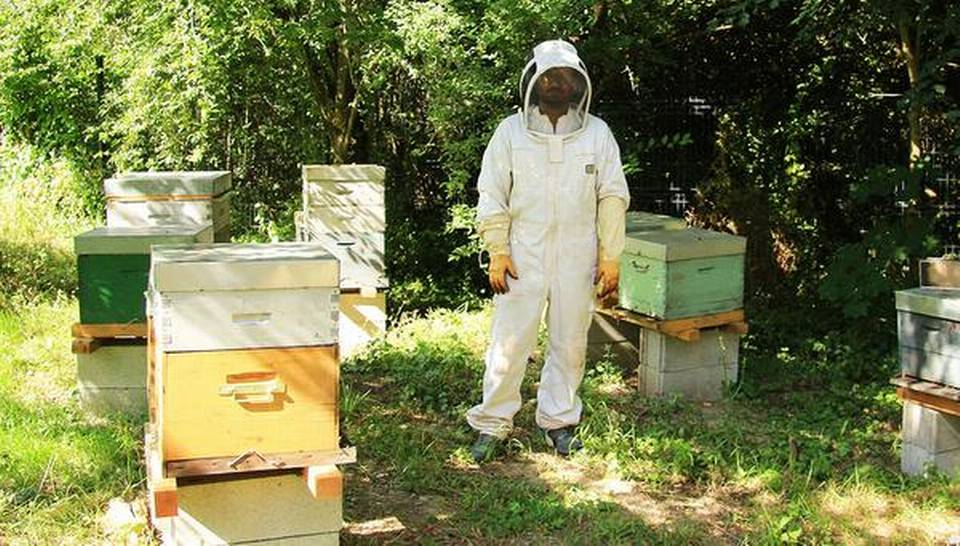 Staying safe:Scientist Souvik Mandal in protective gear during the experiment with bees.

Researchers have unravelled the neuro-molecular mechanism of defence by honey bees when exposed to the sting alarm pheromone that they release in the face of a threat.

The team of researchers led by Prof. Martin Giurfa from the Universite de Toulouse in Toulouse, France has found that smelling isoamyl acetate, the main component in the alarm pheromone, increases the level of serotonin and dopamine in their brains, which, in turn, increases the stinging behaviour in bees and thus repels a threat. By itself, the alarm pheromone does not behave as a stimulus, but increases the likelihood of bees guarding the hive to repel a threat by stinging.

While the level of dopamine did not show significant difference across brain regions in bees from the four colonies, the level of serotonin was significantly elevated in the central brain (where olfactory processing takes place) in bees that exhibited greater proclivity to sting. This was the first indication of serotonin’s role in the defensive behaviour.

“This established the relationship between higher serotonin level following exposure to isoamyl acetate and stinging behaviour,” says Dr. Souvik Mandal, a PhD scholar from Bengaluru’s Indian Institute of Science (IISc). He was a visiting scientist at the Universite de Toulouse to perform behavioural experiments on the bees and one of the authors of a paper published in Proceedings of the Royal Society B .

The researchers introduced antidotes to serotonin and dopamine to reconfirm their role in the stinging behaviour. “The aggressive behaviour reduced significantly when we introduced the antidotes,” he says.

This helped confirm that varying the content of serotonin or dopamine directly affects the stinging behaviour of honeybees.

Bees were more likely to sting due to an increase in serotonin in the central brain and to a “lesser extent” by dopamine.