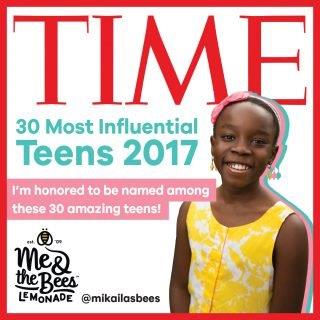 AUSTIN, Texas (November 7, 2017) – Me & the Bees Lemonade founder, philanthropist and kidpreneur, Mikaila Ulmer, has just been named to Time Magazine’s 30 Most Influential Teens of 2017 list.

Mikaila Ulmer was just four years old, when she was stung by two bees in the same week, creating a fascination that inspired her to start Me & The Bees Lemonade. Upon discovering the important role bees play in our ecosystem, Mikaila was determined to help them. Using her Great Granny’s flaxseed honey lemonade recipe, Mikaila launched a business out of her Austin, Texas home. Fast forward 8 years later, Mikaila’s award winning Me & The Bees Lemonade is buzzing off the shelves in more than 300 Whole Foods Market stores, Wegmans and other grocers across the United States. Committed to philanthropy, Mikaila helps save honey bees by donating 10 percent of profits toward the cause.

“I am beyond honored to be recognized with such an amazing list of teens who are showing the world the potential of today’s youth,” says Mikaila Ulmer, kidpreneur, philanthropist and founder Me & the Bees Lemonade. “Time Magazine’s Most Influential Teens list demonstrates the potential power us teens can have, and that age does not have to be a barrier.”

Landing a deal with Daymond John on the show Shark Tank was just the beginning of Me & the Bees’ many business successes. Now just 13 years old, Mikaila’s story has caught the attention of Good Morning America, NBC News, The Real, Forbes and TIME among others, along with the National Retail Federation Foundation (NRF) who named Mikaila one of the Top 25 People Shaping Retail’s Future this past January. Mikaila’s movement has also inspired 10 NFL players including Arian Foster (Former Running Back for the Houston Texans) and Glover Quin (Safety for the Detroit Lions), to sign up as investors, increasing production capacity which has enabled for a greater impact on saving the bees.

In 2015, Me & the Bees Lemonade was the recipient of a low-interest loan from Whole Foods Market, as part of the grocer’s Local Producer Loan Program. With the loan, they created two new flavors of lemonade and continued to supply more stores, most recently launching in Whole Foods Market’s Northeast Region.

“We’re so excited that Mikaila is receiving this recognition as a young and talented influencer,” said Jillian Shimskey, grocery category manager for Whole Foods Market. “Mikaila is innovative, charitable and incredibly driven. We’ve loved seeing her growth both within Whole Foods Market through expansion of Me & the Bees Lemonade, and through her ongoing philanthropic and community endeavors. We’re very proud partners!”

Mikaila recently launched Healthy Hive, a non-profit organization focused on bee Awareness, Education, and Preservation, so team Me & the Bees can make a greater impact on saving the bees. Mikaila has been invited to speak on social entrepreneurship at prestigious gatherings including the White House United State of Women Summit, where she introduced President Barack Obama, the Dell Women’s Entrepreneur Network Summit in South Africa and Microsoft We Day, alongside Satya Nadella.

Mikaila is just getting started. This winter, Mikaila will begin writing her first children’s book which will teach kids how to start and grow their own businesses, and Mikaila is expanding her company to benefit the awareness of and protection her beloved honey bees.

Me and the Bees utilizes the brand management and distribution services of Ramsey, NJ based Cascadia Managing Brands.

About Mikaila and Me & the Bees Lemonade

Me & the Bees Lemonade is a bottled all natural lemonade product with an interesting back story. While preparing for a children’s business competition at the age of 4, Mikaila found her Great Granny Helen’s flaxseed lemonade recipe in a 1940’s family cookbook.  She also was stung by a bee twice in the same week, which Mikaila admits was a very uncomfortable experience. Encouraged by her parents to overcome her fear of bees, Mikaila began to study bees and their role in the ecosystem. She learned that bees pollinate about a third of the foods that humans consume and that the bee population is decreasing.

With the recent launch of Healthy Hive, a non-profit organization focused on bee Awareness, Education, and Preservation, team Me & the Bees can make a greater impact on saving the bees.