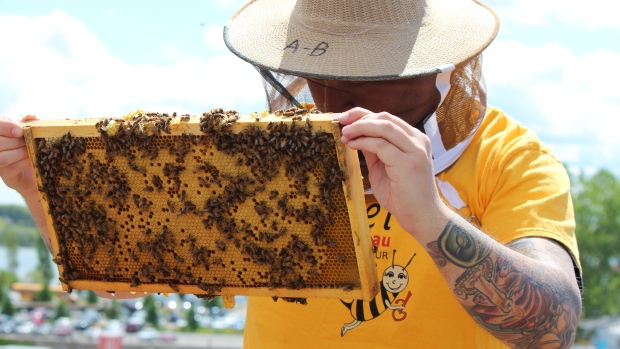 Helping homeless people in Montreal reintegrate into society by teaching them to care for bees may seem like an unusual approach, but organizers of the Accueil Bonneau honey program say it’s been a real success story.

“When they get to be hands on, they see that it’s all about being confident and being at peace with the bees,” said Geneviève Kieffer Després, director of communications and special projects.

The program is partnered with Alvéole and has seven different locations of hives across the city. (Alice Renaud/Accueil Bonneau)

Now the program, whose aim is to teach job skills and encourage social interaction, has 60 hives in seven locations across the city.

“The most important thing is that it’s not just a job. It’s learning to do something you love and getting rewarded for it. That is something we want to teach,” she said.

John Levasseur, an apprentice in the program, sees beekeeping as “meaningful” work.

He says bees are “so important, not only economically, but as a barometer” for the environmental state of the world.

“It’s like therapy for me,” he said, explaining that tending to them requires a certain calmness and focus.

“In a former life I was a DJ. I enjoyed the work, but often I had to get smashed to enjoy it.”

The honey harvested from the hives is sold at various locations in the city, the proceeds of which help fund the program and provide a small fee for participants. 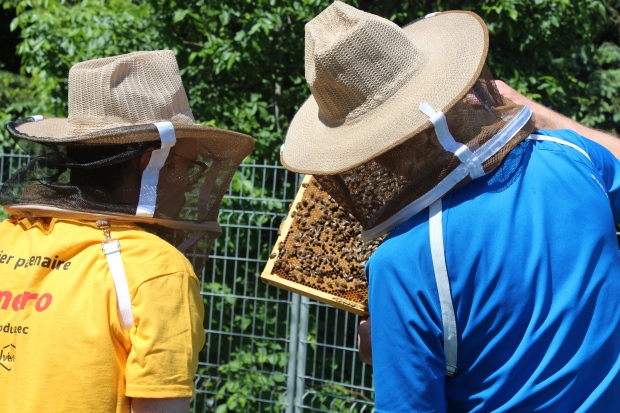 About 10 participants get to volunteer with the beekeeping initiative each year. (Alice Renaud/Accueil Bonneau)

Kieffer Després says that working with the bees teaches participants, homeless men aged 25 and up, to be calm, gentle and more comfortable with socializing.

She recalls one example of a man who started out very shy interacting with the public at one of points of sale and eventually was able to come out of his shell.

“We started selling honey at the beginning of October, and by November, he was the guy going up to people telling them, ‘come see the stand, come try the honey.’ Amazing change, I could witness those kinds of changes everyday.”