Across Minnesota workers are preparing dozens of sites in order to seed more than 30 million native, pollinator-friendly plants. These low-growing and shade-tolerant flowers and prairie grasses will be established where you might least expect — under and around ground-mounted solar panels.

Nationwide prices are plummeting for rooftop and ground-mounted solar panels, and large sites are popping up wherever there is low-cost land and access to an electrical substation. And with 25-year land leases frequently paying $700-$1,500 per acre, farmers and other land owners are increasingly interested in having solar on a portion of their property. 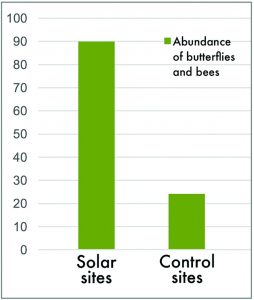 Bar chart An 11-site observational study found that solar sites with pollinator habitat have a statistically significant increase in abundance of bees and butterflies (The Effects of Solar Farms on Local Biodiversity, Montag et. al., 2016).

Recipient of the MacArthur Foundation’s “Genius” award, Dr. Marla Spivak of the University of Minnesota Bee Lab, sees a promising opportunity. “It would be great to have pollinator habitat under and around solar panels and arrays.”

The timing couldn’t be better for commercial bees and wild pollinators, which have suffered massive population losses in our lifetimes in part because of dwindling access to food and habitat. For wild insects and managed bees these sites will be multi-acre buffets of nutritious, native plant pollen and nectar.

Energy policies vary state by state, but between just a handful of states — Florida, Georgia, Minnesota, Maryland, New York, North Carolina, and Oregon — more than 30,000 acres of solar sites are being built this year, and more than 19,000 acres are in development to be built next year. All together, solar projects could provide a world of good for pollinators — and landscape business including Prairie Restorations, Ernst Conservation Seeds, Prairie Moon, and American Native Plants have noticed.

“Within every habitat in North America there is a large variety of pollinator friendly plant species that can be used under solar panels. The panels do create a challenge of some height limitations which will slightly restrict the overall diversity of the plantings, but we can still provide a wide range of forbs and grasses that will be a delight to the pollinators and songbirds native to that area,” said Ron Bowen, founder and CEO of Prairie Restorations, Inc. “The seasonal spectrum that can be planted beneath a solar array, and the fact that once it’s installed, herbicides and pesticides aren’t typically used, makes acreage near solar fields excellent locations for raising healthy bee colonies.” 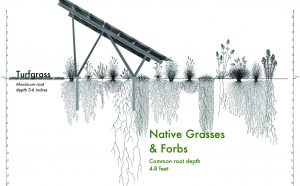 Cross section of solar with native plants. Not to be mistaken with concentrated solar, which uses heat, photovoltaic (PV) solar panels get only as hot as a car parked in the sun. Original illustration by Heidi Natura, adapted with permission.

Beekeeper Oliver Collins has first-hand experience with colony collapse. “I probably own 20 percent of all the hives in the area — and lost around 65 percent of them this past winter. There’s a strong watermelon industry here, but between the mites and native plants getting mowed or sprayed, my bees can’t keep up.” A roughly 150-acre solar site that includes abundant foraging habitat for pollinators was recently proposed for a county in Eastern Maryland where Mr. Collins lives and keeps his bees. If approved by local and state authorities, the project will provide pollinator habitat equivalent to every household in a 5-county area having a 6’x12’ pollinator garden. The solar project developer, OneEnergy Renewables, a socially conscious B-Corporation, is evaluating use of a pollinator-friendly seed mix for a number of its projects currently under development. “It’s a great opportunity for the solar industry as a whole, and we’re excited that our projects will provide so many benefits to the communities in which they’re located,” said Project Manager Gia Clark.

“Pollinators are an irreplaceable public resource. Insect pollinators, such as bees, butterflies, wasps, flies, and beetles, are critical for the pollination and production of crops and the health of native flora and landscapes,” wrote Dave Fredrickson, commissioner of the Minnesota Department of Agriculture, in an email announcing the State’s pollinator summit this year.

In fact, one of the Midwest’s largest solar projects is leading the way. The Aurora solar project, being built in Minnesota by Enel Green Power North America (EGP-NA), will provide pollinator habitat equivalent to more than 500,000 homes having 6’x12’ pollinator gardens. EGP-NA worked hand in hand with the Minnesota Department of Natural Resources to create a robust solar site vegetation plan that creates a biodiverse habitat for pollinator species while preserving the soil for future farming, and channeling stormwater down into the aquifer.

Noting this collaborative process, during the 2016 legislative session, Minnesota’s agricultural leaders worked closely with conservation, energy policy, and business leaders to establish the nation’s first standard for pollinator-friendly solar sites. Authored by Representative Rod Hamilton (R–Mountain Lake) and Senator Dan Sparks (DFL–Austin), the bill establishes robust and flexible vegetation management requirements for any solar project that is promoted as providing benefits to pollinators, songbirds, or game birds. The bill received broad rural, suburban, and metro support, passing the Minnesota House by a vote of 126-0 and the Minnesota Senate by a vote of 62-2. Governor Dayton signed the bill in to law on May 31.

Construction of the Aurora project and many others are underway and it will take time for the native plants to get established and bloom. Over the next several years, just about every state will build several thousand acres of solar sites that—based on collaboration with each community—may meet or exceed this new “pollinator-friendly solar” standard.

As you drive by these sites, don’t just see them for the clean, fuel-free electricity they generate every day, but also notice the benefits provided by the vegetation under and around the panels. The United States has more than 280 million acres of rowcrops and just a tiny fraction will be used for solar sites, but these sites can provide a badly needed, and long-lasting, service in providing healthy food to the hardworking commercial and native bees that pollinate our crops.

Rob Davis is a director at Fresh Energy, an independent 501(c)3 energy nonprofit in St. Paul, Minnesota. Follow him @robfargo and www.Fresh-Energy.org/author/rob.