Depending on the location, button bush can be a large shrub or small tree.

lthough button bush (Cephalanthus occidentalis) may not necessarily be the best known honey plant in North America, it is certainly one of the most widely distributed pollinator species. This native is found in all mainland states except Oregon, Washington, Idaho, Nevada, Utah, Colorado, Montana, Wyoming, and the Dakotas. In addition, the plant also occurs in scattered locations in a few other states. These include Arizona, New Mexico, and California.

The presence of this native typically indicates that the area is a wetland. This lowland species favors wet and damp sites, such as low spots, sinks, swales, bogs, marshes, swamps, and wet flood plains. It is most often found along ditches, canals, rivers, streams, creeks, and lakes. The plant can form dense thickets.

Button bush is known by various other common names. Usually, these refer to the button-like appearance of the flower heads. They include button ball, honey bells, button tree, globe flower, and button wood. It is also called button willow since it generally favors wet or damp places just like the willows. In the West, the plant is often called western button wood. 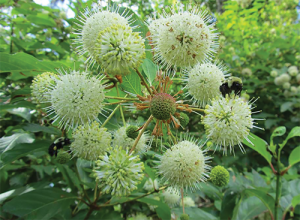 Worldwide, there are about seven to 17 related species that occur in the New or Old World, particularly in tropical regions. These can be evergreen or deciduous trees or shrubs.  Some are native to Asia or Africa.

The genus name is derived from two Greek words meaning head and flower in reference to the flower heads. This group is distantly related to coffee and quinine. Button bush belongs to the madder family, which is also called the bedstraw family. Several relatives of button bush are widely grown as ornamentals, including sweet woodruff, gardenia, and bouvardia. Some native relatives are the partridge berry and bluets.

Depending on the location, button bush can be a large shrub or small tree. Often, it will be the former. This native has reportedly reached 40 to nearly 50 feet in height in certain locations, such as California. On the other hand, in Florida it is typically only half as tall. Elsewhere in colder areas of the country, this woody species generally ranges from three to eight feet or so with about a three to six feet spread.

The bark ranges in color from grayish-green to brownish-gray to nearly black. With age, this becomes scaly and furrowed. The upright, bushy, low branched, very leafy species has a rounded to an irregular spreading shape.

Generally smooth, the foliage can be a source of yellow Fall color although this isn’t quite as pronounced in certain regions. With a papery texture, the glossy leaves are either opposite or in whorls of three. Ranging from 2½ to eight inches long and three inches across, the medium green, pointed foliage is pinnately veined. It can be elliptical, oval, or lance-like. 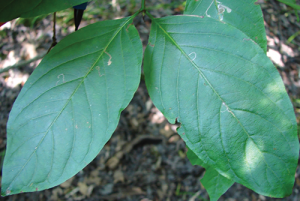 The leaves emerge in late Spring after frost has past. Sometimes, there are slight hints of red along the mid ribs and veins. On the underside, the foliage is sometimes hairy with the color ranging from a slightly lighter green than the upper surface to reddish in some cases. The short, reddish leaf stalks are grooved.

This is a free flowering species. In the southern part of its range, such as California and Florida, this tends to begin flowering in early Summer. Elsewhere, the blooming season is typically somewhat later. In most locations, the flowers will appear for a month or more.

The blossoms are generally creamy white, but occasionally can be reddish or pale pink. For the most part, they’re terminal. However, button bush can also bear flowers in the upper leaf axils.

Only one-third inch long, the small blossoms release an intensely sweet scent. They form dense, rounded, globe-like or spherical-shaped heads. One to two inches across, the heads emerge on long peduncles that are generally branched.

These have often been described as spiky cotton balls, pinwheels, or pin cushions. One of the most distinctive features of the flowers is the long styles that protrude far beyond the end of the corolla. Each funnel-like corolla contains four fused petals.

The stigmas are typically heavily laden with pollen. The calyx is usually hairy at the base. These contain four stamens and one pistil. The dried flowers as well as the leaves smell like new mown hay.

Shaped somewhat like a top, the firm, angular nutlets or fruits can be reddish, pinkish-red, or brownish-red. These form dense, round clusters. The fruits eventually split from the base upwards into two to four, closed, one sided sections.

Ripening in the Fall, these remain on the plant over the Winter and are eaten by various kinds of birds, including shore birds and water fowl. Mallard ducks are particularly fond of the seeds.

According to some botanical experts, several varieties of the native button bush can be found in some areas of the country. Cephalanthus occidentalis var. californica is restricted to certain areas of the state of California. It is typically found below 3000 feet elevation.

Reaching up to 30 feet in height and 10 feet across, this variety tends to be slightly less hardy than the species – to 25 degrees Fahrenheit. The much branched, upright, fast growing plant bears foliage with orange to yellow Fall color. The white blossoms emerge from Spring throughout the Summer. It is adapted to alkaline soils.

A variety known as honey bells (Cephalanthus occidentalis var. pubescens) is recognized by some botanists. This has been reported in certain states, including Texas, Oklahoma, Indiana, Illinois, Ohio, Louisiana, Georgia, and Virginia.

This variety is also reportedly somewhat less hardy than the species. The fact that the common button bush foliage is typically smooth makes it easy to identify this one because its leaves happen to be hairy on both surfaces.

This variety features flower heads that are two inches across and ovate to lance-shaped or oblong foliage. The branchlets are also hairy as well.

Some horticultural experts recognize an additional variety called Cephalanthus occidentalis var. angustifolia. This one can be identified by the slightly narrower leaves.

Although button bush has sometimes been taken internally for medicinal purposes, I would choose to err on the side of caution and not consume any part of this plant. According to Toxic Plants of North America by George Burrows and Ronald J. Tyrl, this has been responsible for poisoning some animals. 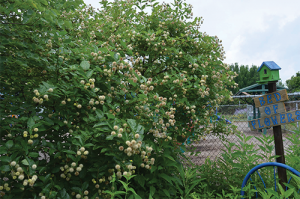 Bees work each of the individual flowers on the crowded flower heads from about 11 a.m. to dusk. These blossoms produce an abundance of nectar and pollen. The latter is yellow.

When these plants are flowering, they’re sure to attract honey bees as well as butterflies and hummingbirds. When the bees are working this plant, the apiary often has a rich aroma at night.

Button bush is a common nectar plant over much of the continental U.S. It is a major nectar and pollen plant in the Northeast, the North Central region, the Plains, the West, and the Southeast. The plant is found in most honey producing states. This is considered to be a particularly important honey plant along the Mississippi River.

One reason that button bush is such a valuable bee plant is that it can bear flowers over an extended period, typically from July to September in some locations. This occurs at a time when there is often a dearth of nectar and pollen.

The pleasant, mild tasting honey is good quality. This is heavy bodied and light colored.

It is indeed a pleasure to recommend button bush for bee gardens because this native is an easy to grow, reliable choice that is suited to most regions and situations. The only limiting factor that I can find for this outstanding species is its ultimate size, which might make it unsuitable for small garden spaces. Full sun is really best for optimal flowering, although the plant does grow reasonably well in partial shade. In sunny sites, it will be more compact.

Both seeds and plants are readily available from nurseries and various sources. Button bush can self sow, and can also spread by producing root sprouts. This native woody plant is fairly easy to grow from seeds and cuttings.

Seeds should be collected from late Summer to Autumn before the nutlets begin to split. Cuttings of button bush can sometimes take up to a month to root.

Preferring a moist, rich, fertile soil high in organic matter, this tolerates a range of pH levels from acidic to neutral. In California, it thrives in alkaline soils.

So far as the soil type is concerned, button bush grows well in a wide range from clay or loam to limestone. A peaty soil is considered ideal.

Even though the plant typically occurs in moist sites, the plant is much more adaptable than previously thought. A three-year study at the University of Connecticut-Storrs found this thrived in a parking lot with a dry, well drained soil. By the end of the study, the plants had reached five feet in height and were almost as wide.

Buttonbush is completely Winter hardy in zones six through 11. It is considered marginally hardy in zones four and five where the tops can at times experience significant dieback during very harsh Winters. In such situations, the plant can be treated as a perennial since new sprouts arise from the roots each Spring.

When planted in wet spots, button bush has a tendency to spread. If planting it in such areas, allow the plant to have plenty room. Normally when button bush is cultivated, this will generally grow larger than those plants found in the wild.

Button bush benefits from an annual pruning. This tends to result in a more floriferous, dense, compact plant. Pruning is best done in late Winter to very early Spring before growth begins. It can also be done in the Fall after the plant has finished flowering.

Those plants that receive a light application of fertilizer once a year in the early Spring are generally the most free flowering. In most situations, button bush usually experiences minimal damage from insects and diseases. The few exceptions seem to be deer, which browse on the plant. Chewing insects sometimes feed on the leaves in Florida.

Several improved cultivars of button bush are available. In 2016, a compact, rounded version called Fiber Optics was released. It is usually smaller than the species, typically reaching six feet tall with a matching width.

Fiber Optics button bush is reportedly hardy to zone four. The attractive plant bears flamboyant, 1½ inch wide flower heads. These blooms are covered with very showy stamens that resemble white quills. So far as sources for this newer cultivar are concerned, it is apparently sold by some greenhouses in Minnesota and Chicago. But, as of yet I haven’t found it at online or mail order nurseries.

Bee gardeners will also find another lower growing cultivar of button bush called Sugar Shack. This Proven Winners selection should be widely available at the many local nurseries and garden centers that sell this nationally distributed brand of plants. Bluestone Perennials as well as Jung Seed are two sources for Sugar Shack.

With a moderate growth rate, Sugar Shack button bush is even smaller than Fiber Optics – only three to four feet in height. The reddish tips of the foliage add a punch of color to the plant. The name refers to the very sweet scent of the blooms, which open throughout the Summer months.