By QUEEN MARY UNIVERSITY OF LONDON 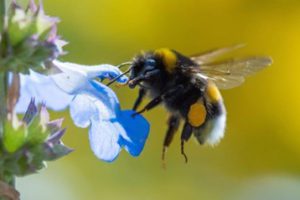 First-ever study shows that bumble bees ‘play’. The experiment, in which bumble bees rolled wooden balls, was the first time that object play behavior has been shown in an insect.

Bumble bees play, according to new research published in the journal Animal Behaviour.  It is the first time that object play behavior has been shown in an insect, adding to mounting evidence that bees may experience positive ‘feelings’.

Numerous experiments were set up by a team of researchers, who were led by scientists from Queen Mary University of London, to test their hypothesis. They showed that bumble bees went out of their way to roll wooden balls repeatedly despite there being no apparent incentive for doing so.

According to the findings, younger bees rolled more balls than older bees. These results mirrored the human behavior of young children and other juvenile mammals and birds being the most playful. Additionally, male bees rolled the balls for longer than their female counterparts.

Forty-five bumble bees were followed in the study as they went through an arena. They were given the option of walking through an unobstructed path to reach a feeding area or deviating from this path into the areas with wooden balls. Individual bees rolled balls between 1 and, impressively, 117 times over the experiment. The repeated behavior suggested that ball-rolling was rewarding.

This was further supported by another experiment where a different set of 42 bees was given access to two colored chambers. One chamber always contained movable balls, while the other one did not have any objects. When tested later and given a choice between the two chambers, neither containing balls at the time, bees showed a preference for the color of the chamber previously associated with the wooden balls. The set-up of the experiments removed any notion that the bees were moving the balls for any greater purpose other than play. Rolling balls did not contribute to survival strategies, such as gaining food, clearing clutter, or mating and was done under stress-free conditions.

The study expands on earlier work from the same Queen Mary lab that showed that bumble bees can be trained to score goals by rolling a balls to targets in exchange for a sugary food reward. During the previous experiment, the team observed that bumble bees rolled balls outside of the experiment, without getting any food reward. The new research demonstrated that the bees rolling balls repeatedly without being trained and without receiving any food for doing so — it was voluntary and spontaneous — therefore akin to play behavior as seen in other animals.

Samadi Galpayage, first author on the study and PhD student at Queen Mary University of London said: “It is certainly mind-blowing, at times amusing, to watch bumble bees show something like play. They approach and manipulate these ‘toys’ again and again. It goes to show, once more, that despite their little size and tiny brains, they are more than small robotic beings. They may actually experience some kind of positive emotional states, even if rudimentary, like other larger fluffy, or not so fluffy, animals do. This sort of finding has implications to our understanding of sentience and welfare of insects and will, hopefully, encourage us to respect and protect life on Earth ever more.”

Professor Lars Chittka, Professor of Sensory and Behavioural Ecology at Queen Mary University of London, head of the lab and author of the recent book ‘The Mind of a Bee’, said: “This research provides a strong indication that insect minds are far more sophisticated than we might imagine. There are lots of animals who play just for the purposes of enjoyment, but most examples come from young mammals and birds.

“We are producing ever-increasing amounts of evidence backing up the need to do all we can to protect insects that are a million miles from the mindless, unfeeling creatures they are traditionally believed to be.”

We are here to share current happenings in the bee industry. Bee Culture gathers and shares articles published by outside sources. For more information about this specific article, please visit the original publish source: Astonishing Experiment Shows Bumble Bees “Play” With Objects (scitechdaily.com)