As Good As It Gets For Bees & Beekeepers In NC

A NC treasure from age six on – Bill was a beeman. 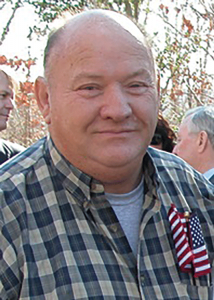 North Carolina beekeepers suffered an enormous loss recently: the passing of one of our most influential and tireless honey bee advocates, Mr. William (“Bill”) H. Sheppard, Jr. on Dec. 2nd, 2016.  The grief over Bill’s death is far-reaching. His family lost a loving, loyal patriarch, and the beekeeping community lost a great friend, mentor, and faithful bee supporter.  If ever there was true champion of honey bees, it was Bill.

Bill Sheppard was practically synonymous with North Carolina beekeeping. One would be hard-pressed to become a beekeeper in our state without hearing his name, or if you were really lucky, meeting him in person. A few moments of speaking with Bill and you would be hooked. Much like that mysterious force that draws us into beekeeping in the first place so too was Bill Sheppard a force to be reckoned with. But with Bill, there was no mystery. He was a man who devoted his entire life to bees and to the betterment of beekeeping in North Carolina. His influence reached far beyond the boundary lines of our state, and will continue to enlighten beekeepers and bee lovers for a very, very long time.

Bill was a helluva guy to know, a true character. I first met Bill when I was a beekeeping student at NCSU almost 20 years ago. He was instantly one of my favorites with his upbeat, endearingly quirky personality and indelible laughter, the kind that sticks in your brain and makes you smile. Such was Bill, always spreading light wherever he went. Bill was the kind of guy that was always helping somebody, always sharing his gift of wit and wisdom. Two decades later, he still had the same, positive energy and unwavering devotion to bees that was clearly ingrained in his spirit.

You might say Bill was born with beekeeping in his blood, literally, when his mother was stung by a bee when only a few months pregnant with him. Given the fact that he was from a long line of beekeepers, that single moment seemed to seal his apiarist fate, not to mention the fate of North Carolina beekeeping. The second oldest of seven children, Bill was the only one to follow in his father’s beekeeping footsteps.  As a 6th generation beekeeper, Bill recited his ancestral ties to bees with precision and authority.

“My great, great, great grandfather Noah had 140 hives listed on the tax books in 1836,” Bill reflected fondly when I spoke with him recently. “There were no records prior to Noah, so there could have been more before him.”

All of the generations of Sheppards that followed continued in beekeeping, either as a supplement to farming or as a sole profession. 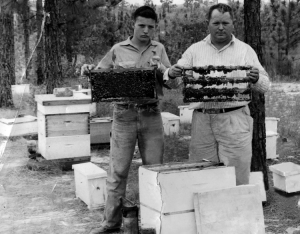 The apple didn’t fall far from the tree. Bill was merely two years old when he stepped into an apiary with his father for the first time, and remained a constant presence in the beekeeping community his entire life. His childhood was rife with beekeeping experiences that rival the best of them. Bill started queen grafting at the age of five, and by 16, partnered with his father in their commercial beekeeping business, when he took on a lot of the major responsibilities after his father had a heart attack.

Bill’s long history of serving the North Carolina State Beekeepers Association (NCSBA) began when he was asked at age six to serve as a youth representative for the organization. (I can’t help but smile when I conjure up the image of a six-year-old Bill.) Youth membership dues at the time were 25 cents, but once he reached the ripe old age of 16, he had to pay $1 dues like everybody else!

Bill was an active member of the 4-H club, and proudly won the state beekeeping contest for his requeening demonstration in 1957.  For the next 20 years, Bill helped with the bee exhibit at the North Carolina State fair, giving live bee demonstrations for over 10 of those years. In 1975 Bill helped design, build and maintain a new exhibit that would be used for over 30 years.

By the mid-1970s, Bill was awarded lifetime membership for his years of service to the NCSBA. 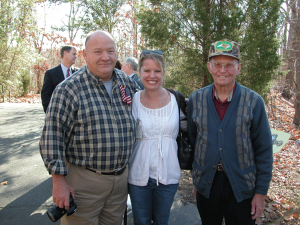 Bill Sheppard, Lane Kreitlow, and Mr. Irvin Rackley at the
ribbon cutting ceremony for the Honey Bee Exhibit at the
NC Zoo in 2009.

Bill’s contributions to the NCSBA didn’t stop there – far from it.  He went on to serve on the Board and as President, Vice President, Director, and on countless committees and other roles from 1975 until about 2008.  Bill, along with Dr. John Ambrose and Mr. Irvin Rackley, started the Zoo Committee, which led the NCSBA in a successful fundraising campaign that went on to raise enough funds to build a permanent honey bee exhibit at the North Carolina Zoological Park in Asheboro. At roughly $160,000, this was no small feat!  Bill and his wife Sandra also started the “Cooking with Honey” Program, a crowd favorite at state meetings and the state fair.

In 1977, Bill’s service to NC beekeeping took on a more formal role when he was hired on a two-year Coastal Plains grant to work as a state apiary inspector.  Two years later, he became a permanent employee of the North Carolina Department of Agriculture and Consumer Services (NCDA&CS), where he would spend the next 32 years inspecting hives all throughout southwestern North Carolina, spreading his vast amount of knowledge and telling a lot of corny jokes along the way.

Bill’s many awards and honors are a testament to his long list of contributions to beekeeping:  NCSBA Person of the Year, Life Membership, McIver-Hass Lifetime Achievement Award, Person of the Decade, President Emeritus, and nine different presidential awards.  Bill helped start beekeeping chapters for at least 11 counties in North Carolina- many on his own- including Moore, Montgomery, and Chatham Counties, to name a few.  Bill has also received at least 15 awards from various county chapters for his accomplishments.  Ever the educator, Bill taught beekeeping at nine different community colleges for seven years, and taught a full credit-course at Montgomery Tech for a year.

Bill was married to his wife Sandra for 56 years!  Together they had five children: William H. III (Winky), George Randolph (Randy), Donna Marie, and twins Wesley Eric and Abbey.  They also have six grandchildren and five great-grandchildren.

Bill’s accomplishments didn’t end in the beeyard. He was a superintendent of Sunday school for Page Memorial Methodist Church in Aberdeen, NC for 12 years, and a Sunday school teacher for 20 years. He was the president of the PTA, earned the rank of Eagle Scout, was a Scout Master for seven years, and was a member of the Order of the Arrow, a prestigious Boy Scout honorary organization.

Born in 1940, Bill was quite possibly the longest standing member of the NCSBA, with over 70 years under his belt. In recent years, Bill became virtually blind, but that didn’t stop him from perpetuating his legacy of contributions to North Carolina beekeeping. Bill continued to participate in speaking engagements at meetings all over the state, made possible by his devoted wife Sandra. When not interacting with other beekeepers, he spent much of his free time in his workshop, where he built various woodenware including miniature beehives and hexagon puzzles that he sold at state meetings, with proceeds benefiting the apiculture lab at North Carolina State University.

Bill was an avid photographer for most of his life, earning an honorary membership to the Sandhills Photography Club for over 35 years. Throughout his tenure as a state apiary inspector, Bill took over 140,000 photos, documenting his hive inspections.  If anyone has seen it all inside a beehive it was Bill, and there is a good chance there is a photo of it somewhere. Bill donated a subset of his collection of over 4,000 personal photographs of bee plants to the NCSBA for use by its members.

I can’t say enough about Bill Sheppard.  He contributed more to beekeeping in North Carolina than seems fathomable by a single person, and yet he never seemed to tire of it or run out of great stories.  We are truly fortunate to have known him. Bill’s legacy will live on though his family and the many lives he touched, the countless beekeepers he inspired, and the untold number of bees that will be saved as the result of the unfaltering advocacy to which Bill devoted his life. Beekeeping, and indeed North Carolina, will never be the same without him.

This article is adapted from an article published in the fall 2016 issue of the NCSBA newsletter, the Bee Buzz.

Q: A beekeeper in Pennsylvania writes:  I have a question on storing raw honey. What is the optimum temperature to help prevent crystallization? In the…