Recently, we’ve spent more of our time in the Dakotas than we have at our house. The kids have very nearly gone feral, digging through the freezer for pizzas and speaking incoherently at us (I guess really nothing new) for the few days we have had them instead of their grandparents. Our yard is a mess, our bees are hungry, the garden is neglected – but sometimes, you just have to hire a guy to move your bees around and chase them there.

We moved bees for work to South Dakota, and it was definitely a feat. We had some difficulty getting a truck to take our hives. We only wanted to ship around 120-150, which we were told was not a full load, and we’d have to pay full price. That was not a problem, but the issue of securing fewer pallets than the truck would hold was a concern. The logistics of moving hives is absolutely insane. I don’t know how commercial guys do it all the time, but I guess you get a rhythm going and you’re good. 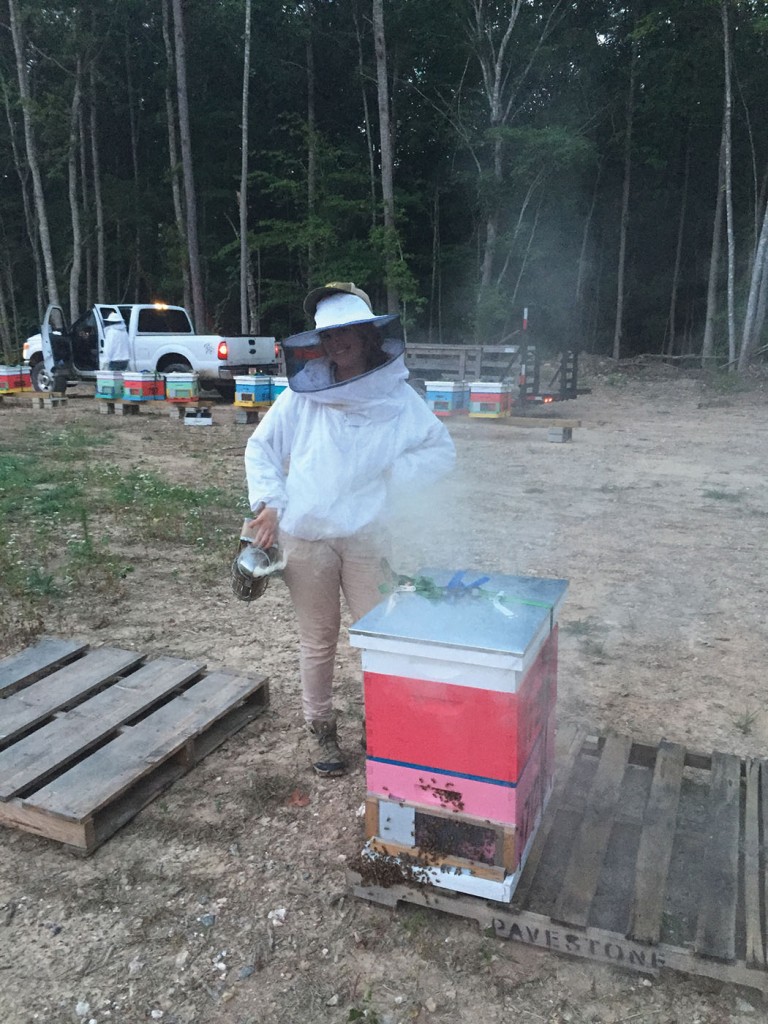 Alison is cheerful even though she’s at work at what is now closer to 6:30 a.m.

The first part of our journey included five techs meeting us at work at 5:00 a.m. (we live an hour from work, so this was highly unpleasant) to make sure the bees were shooed back in and the hives were closed. Since we keep robbing screens on the hives, this is not such a big deal, except for the darkness at 5:00. We learned the hard way earlier in the year that 6:30 is way too late in the day, and 6:00 is really cutting it close. We had our pallets laid out along the driveway, and had a crew drive around, pick up the hives, and then drop them on the pallets.

Our job (that would be me and Bobby) was to un-ratchet each hive and re-ratchet it to the pallet. This is really a lot less fun than it sounds. I know this is what everyone dreams to do every day. Once we had our hives strapped to the pallet, we added a pallet on top to go ahead and double them up. It took us almost five hours to get the hives put on the pallets, strapped down, and then added on top. We had double deep hives on all the bottom pallets, and single deeps on top. We also had one pallet of triples, and then three leftover pallets of singles. Everybody also still had their top feeders on, so these were some fairly tall hives. 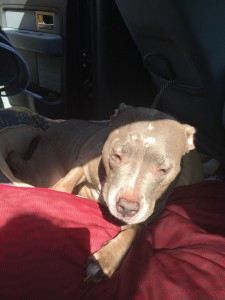 It’s pretty early in the morning, even for Atlantis.

After the hives were more or less ready to go, we opened them back up so they didn’t get too hot. It was in the mid-90s by the time we finished getting organized, and it would have been a shame if they’d all ended up in South Dakota – dead. Since we would be gone for a week, our dog Atlantis was “toughing it out” in the backseat of the truck, which is to say that she was curled up in her bed in the shade having the best day ever. It was a pretty early day, even for her.

Once the hives were as ready as we could do, we did the round trip to my mom’s house to drop off Atlantis for the week, stop by a couple places for supplies, and head back to work to load the truck. Our driver, Chad, was ready to be there a little earlier than planned, which was super awesome for us. The forklift driver didn’t live too far away, so he was happy to come out early too. It only took about an hour to load the truck, which turned out to be a full load since we had doubles and triples. Chad definitely knew what he was doing. 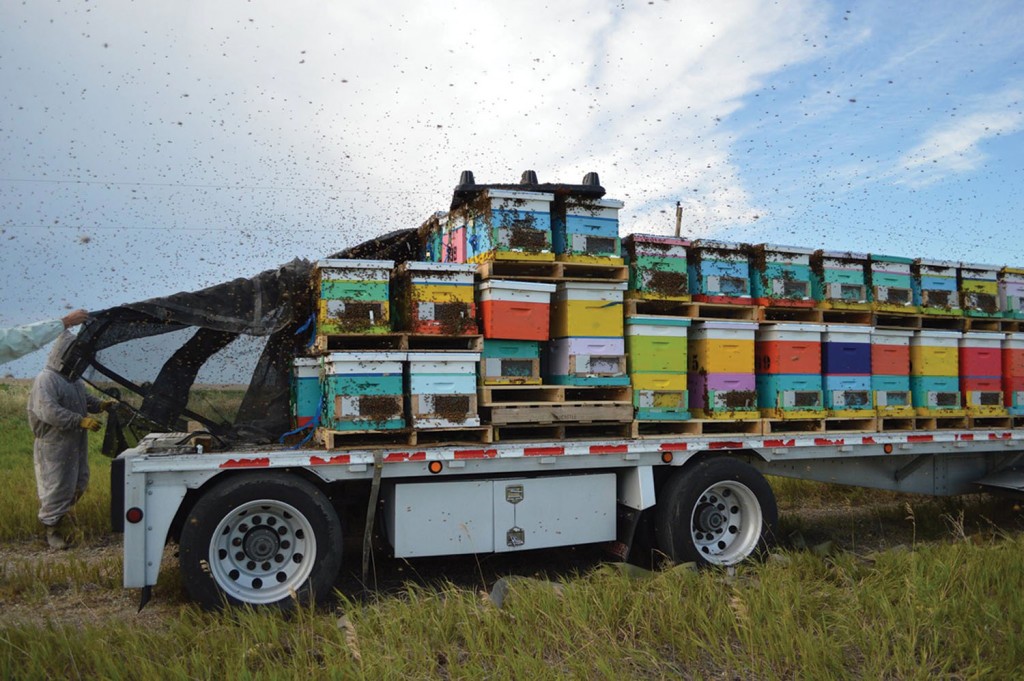 The bees finally arrive in South Dakota, and they are not excited about travel.

I don’t know if it was just a random thing or if we ended up with him because of our final destination, but he was from South Dakota about an hour from our drop site. He said about 80% of his business was moving hives, and also informed us that our hive tops suck because they rip the bee mesh on the truck (we had metal telescoping tops) and that we should switch to wooden migratory tops in the future. I will definitely say that migratory tops would have made the ratcheting and the hive spacing a lot easier, so this will get incorporated in next year’s hives.

We also learned from Chad that you need to twist the big trucker straps that cover the top of the hives so that the wind doesn’t vibrate them right into the hives. I didn’t really like not having them straight because it wasn’t pretty, but he was making a lot of sense and I’m sure he knew how to do his job without me telling him what looks better. He did fast work putting on the mesh, tightening his ratchets, putting on planks to keep the lines straight, and there may have been some bungee cords in there somewhere. I have an irrational (or maybe rational, depending on how you look at it) fear of bungee cords because I had one crack into my face in my second week of grad school and cause a hairline fracture in my eye socket. It’s a natural reaction for me to remove myself from a situation involving bungees now, so I vaguely think he used them and I went away. Once it was done, we did a really clumsy bill of lading, which I still don’t quite understand but I think I figured it out. It’s now dark out, so we tell Chad to have a safe trip, he wishes us the same, and we follow him out to the interstate.

In South Dakota, there’s only really two regional airports that can bring you in for a reasonable cost. For this trip, we didn’t use either one and ended up flying into Fargo because we needed to check on our bees up in North Dakota, then drive down to South Dakota. We had enough time to check out the area and our locations before Chad arrived promptly at 7:00 p.m. just as promised. We had our second forklift driver arranged, got our bees down to the drop site, and started unwrapping the truck (that would be Bobby, not me). I’ve worked with some nasty bees before, but our sweet southern bees had turned into raging death machines on the drive up. Just the sheer numbers of bees everywhere was enough to cause a bee-nado (better than the more common tornadoes in the area). They were doing their best to sting through the veils, and you couldn’t have any exposed skin. I know Bobby had 15 or 20 stings in his hands before he finally borrowed a pair of gloves from Chad. There were also some swarming issues, which I would assume were just par for the course with the anger, close proximity to other bees, vibration from the road for two days, etc. It certainly didn’t make them any happier.

Our forklift driver fortunately had a closed cab, and seemed to be totally happy not coming out. He did a great job pulling the pallets off the truck. Unfortunately with the anger management issues going on in the bees, a storm started rolling in when they were about halfway unloaded. You could feel the angry go up a notch with every crack of lightning in the distance. When the bees were all on the ground, we thanked Chad, who was sitting in his truck with the bee suit still on, and watched the other guy load his forklift onto his trailer about a half a mile or so from the bees, where he proceeded to receive four stings to the face. He may not help us again in the future, but I guess I don’t blame him. 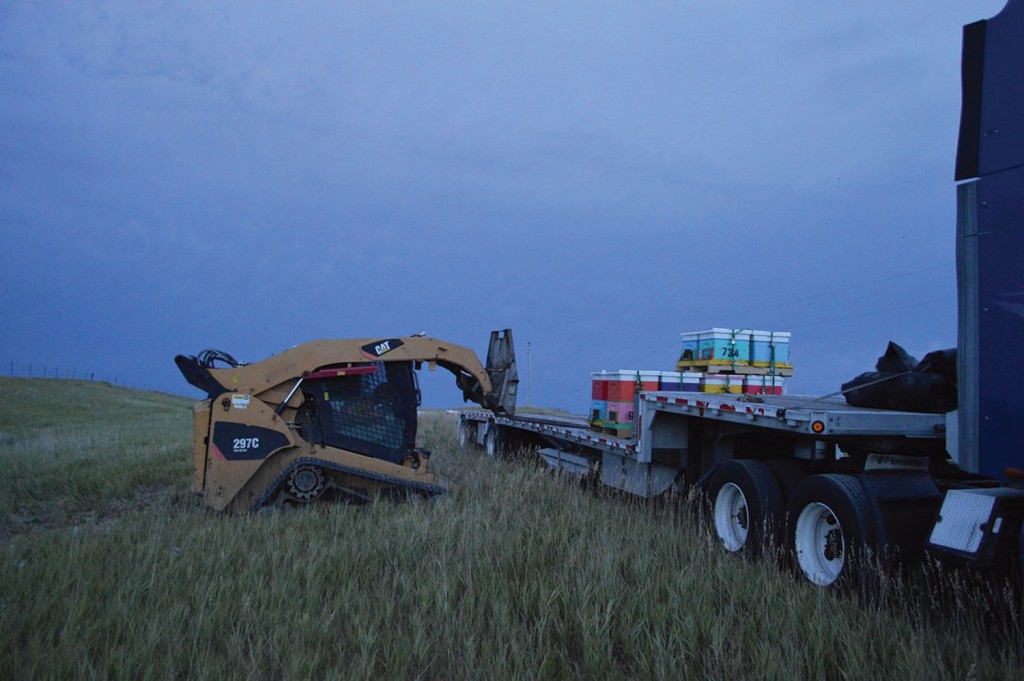 With the storm rolling in, all of our hives were on the ground, and we were ready to head back to the hotel to bask in our awesomeness. It was definitely a learning-curve infused experience that was kind of fun and certainly interesting. Two of our techs came up to stay with the bees, and help our local beekeepers re-mark our queens. We did pretty well overall, with taking 148 hives total on the truck, and finished with 137 queens post-marking. I can’t say that we lost those 11 just to the moving either, as we were having a lot of swarming in North Carolina and they may not have had a queen when they left. If I could change one thing to do it differently, I might have requested a little more sage advice from local commercial guys. We were going too fast to get everything done with the insane schedule that we didn’t have enough time to really talk to anybody much for opinions. I spoke to Jeff Lee (Lee’s Bees) for just a short call to get a phone number of a reputable bee moving operation, and they served us well. We will have to move these ladies again in a few months, so there might be a continuation on this story if we learn anything new.