Last year, we installed 200 packages at work. Bobby and I had just switched to a new-to-us company, and we were scrambling to get everything ready. If you read my rant last year on the bee company that cancelled our order and sent our check back just days before our packages arrived, you may remember some of the stress we encountered. We had just cleared five acres of land in a square-ish plot, and only had one side of that ready to use. All of our installation help were new people, which was around 12 helpers, but only two of them had ever even seen the inside of a hive before. We had people setting up hives when we drove in with the packages that Saturday because a thunderstorm rolled in on Friday afternoon and was so bad that nobody could go in the field. We had a few people who had also never used ratchet straps. It was a little bit horrendous. In the end, it worked out okay, but we vowed that this year would not happen that way again.

The first thing we did was plant our field in what was supposed to be bee plants mixed with Winter wheat to give some erosion control over the cold months. In retrospect, we should have planted a clover/vetch mix a little thicker, because now the wheat is starting to shade out our newly-emerging buckwheat that reseeded itself from last year. It definitely looks better and mud is not running everywhere, but there’s room for improvement. 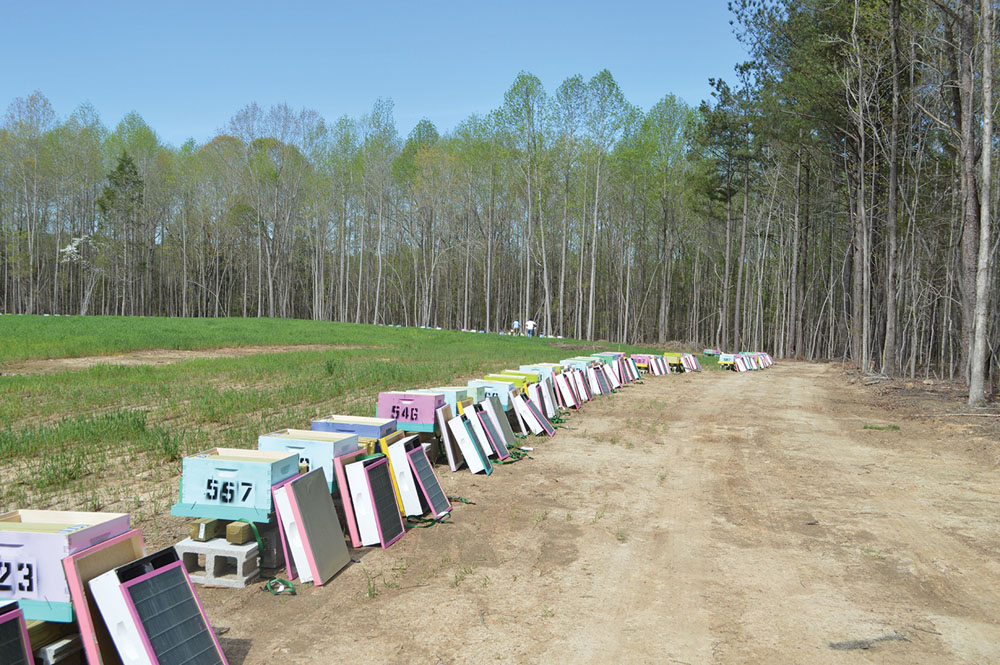 We also wanted to do a little more work in the field to give more space for the bees. Putting all the hives on one side of the field grouped them a little closer together than I would have liked (and probably closer than they would have liked too). We had a grader come in and make us a nice driveway around the outskirts of the field, and set up our hives on three sides. Last year, we had four hives to a pallet and I didn’t really like having them that close to the ground either, or that close to each other. We put up 67 eight-foot long stands this year that had three hives on each stand. It raised up the hives a little more, which helps our backs and makes it a little easier to feed them, but it also makes a nice pathway where you are always behind the bees and never in a flight path. We use a truck with a 330-gallon elliptical tank on the back to feed, and last year you were always in the way of at least one or two hives every time you stopped to feed. It’s really much better.

As I mentioned earlier, we had a serious problem with our equipment. We came in late to the bee season and had to scrounge and beg and call in favors to pull off the season. That was one more level of insanity that we were hoping to avoid, which I would say was fairly successful this year. With bee work in California, the Dakotas, and several other places, we are working with a total of around 650 colonies. We’ve had our techs working on equipment for a good couple months.

Dadant really saved us last year with the equipment, so we wanted to give them all our business this year as well. Mark worked with us to make sure we had all of our equipment and would even drive it down to us so we didn’t have to pick it up. I think I picked out 14 different paint colors this year and had the techs go at it. We still use the Mann Lake feeders, but this year we remembered that the sides of the wire is not secured. Last year, we had two techs sitting in the grass for hours with Disney princess and purple leopard print Duck Tape to hold down one side of the feeder (the side we weren’t using to feed) so the bees didn’t come out and get stuck in the feeder and die. We went through almost 50 bottles of silicone this year sealing up those edges, and it looks a lot nicer. 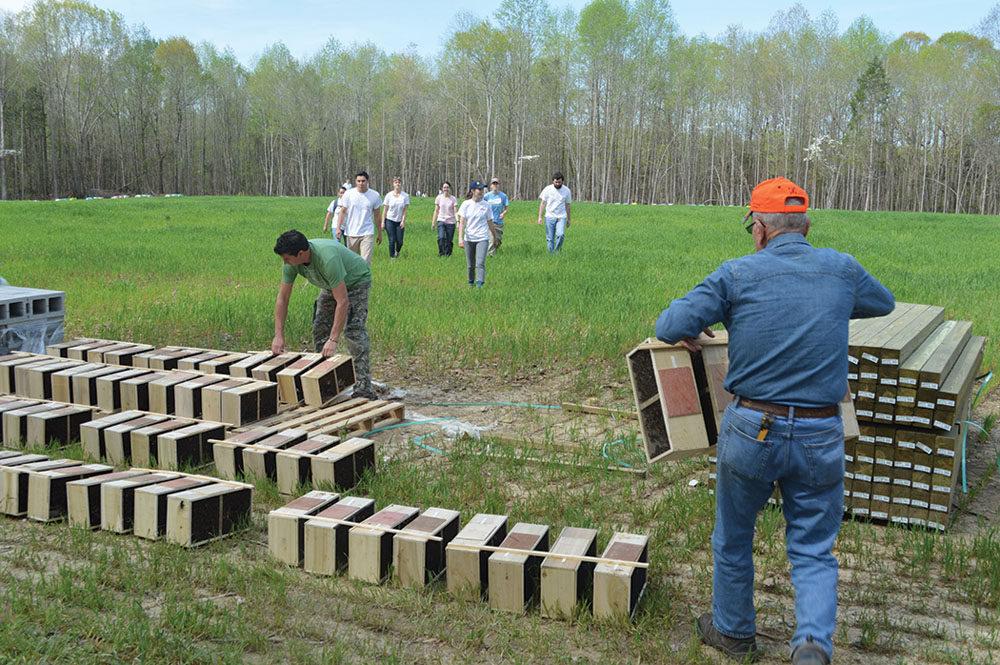 We also have to do a lot of digital photography with our bees, and every frame has to have a label on it so we know which frame it is from which hive in what study. We attach labels with metal tags, and let me tell you, bees do not like if you attach them while the frames are occupied. We were able to get all of our hives and frames labeled before the package installation, and that is no small feat.

There was also a nice surprise that we were getting some serious help in California. Our bees out there are from Olivarez Honey Bees, and Ray agreed to babysit our bees for us. All we had to do was ship him equipment that we wanted to use, and he would have his group install, feed, and monitor the hives until we needed them for the studies, at which point he would also drive them down for us. The techs had to get together 200 hives worth of equipment, get it on pallets, and get it loaded on a truck for delivery to Ray all with about 10 days’ notice, plus finishing up 230 hives for our first installation day here, and getting started on our 190 package installation that will happen in another two weeks.

Another issue we had was the lack of experience from our techs. This year, we have offered positions to 26 graduates (or students) for the Summer field season onward. We interviewed almost 70 people to pick the people we thought could deal with the stress level that comes with the bee work. We had one tech that stayed from last year, and four techs that have been on board for a couple months. Almost everyone else (except one from Ireland and one from Canada) won’t graduate until May so they couldn’t work full time until then. We offered this group the chance to come out for package installation to get the bee experience as well as be gophers for us. If they seemed to pick up the installation process well, then they could do some too. We ended up with a total of our original 6 (our Irish tech came in this week) plus 13 that were counting this as their first official day of work. Our currently employed techs sat out all the stands and hives previously, but every frame still had to be sprayed with sugar water. We use plastic frames for various reasons, but the bees take to them a lot better with that sugar spray. When we were ready to install, every hive was open, with frames sprayed, feeder to the side, and ratchet ready.

For the package installation itself, Bobby and I were not exactly wanting to replicate last year when we ended up doing the majority of the installations by ourselves. We worked out a deal with Tim Dover, one of the owners of The Carolina Honey Bee Company to not only deliver our bees, but to also help us do the installation and bring some help with him. I also called Jack Tapp to see if he could come help, and he brought his youngest son with him. We received moral support from Don Hopkins, mostly because we scared Tim into thinking he was going to get lost and he arrived a full three hours before we thought he’d be there and Don couldn’t come until around the original time. Honestly it’s worth having Don around just for his advice and bee knowledge. With this team on board, we had a pretty smooth time, with a few bumps, because it’s never perfect!

We had everyone arrive by 9:00 a.m., and we finished the actual installations right at 1:00 p.m. We stopped for lunch, and then went back up for some pictures. We did have about three swarms that had to be evaluated, but only having three swarm problems from over 200 packages isn’t so bad.

One was particularly a problem though because it was about five hives’ worth of bees. Bobby and I decided to tackle the beast head on, as it was hanging out of a tree maybe 15 feet in the air. I would say we enjoyed putting on a show for the techs, but we would have done the same thing if we were there by ourselves because either we really like challenges or we are insane (maybe both). 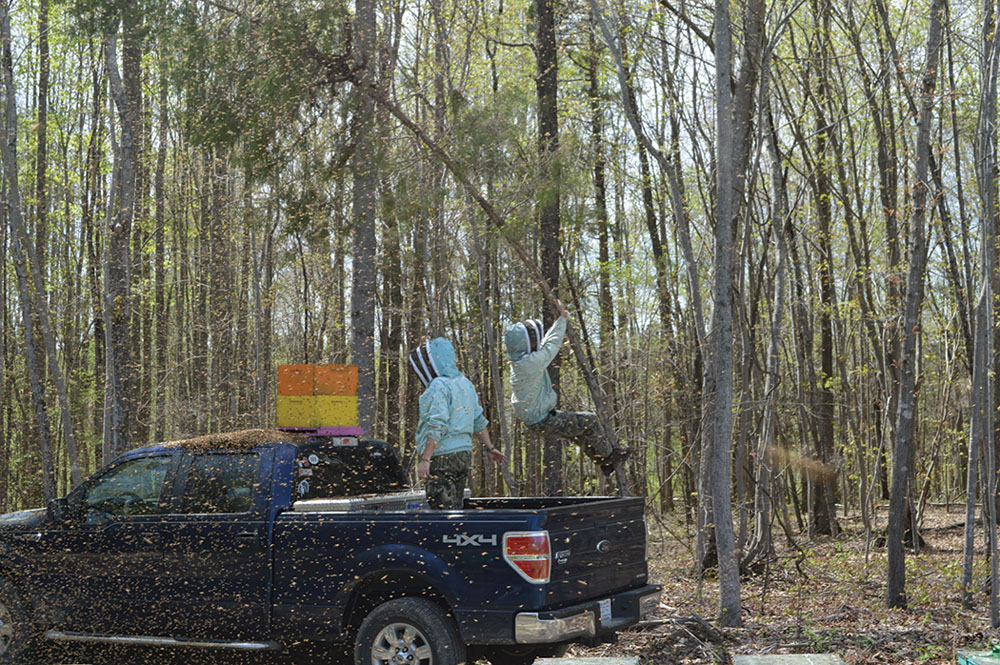 If you can estimate the size of our truck, the swarm was about six or eight feet above the cab. It seemed to us at the time that the best way to catch this swarm was to put a box on the cab of the truck while standing on the toolbox and have Bobby kamikaze jump at the tree to shake the bees out (yes, there is a video floating around. It was an impressive jump).

Unfortunately, the trajectory slightly changed, and although we did catch the queen in the box on the first shake, we lost about 80,000 (or more) bees down the side of our truck and onto the ground. They made a nice little trail and started pouring themselves into the box until they couldn’t fit anymore. A lot of them also resettled into the tree. Bobby ripped his hands open on the tree during his jump, so the next few rounds he went baseball style on the tree to knock them out. We ended up with five completely full boxes of bees for that swarm. It’s going to be nice splitting those back out later.

Overall, I think our planning went a lot better for this year. There’re a few things I’d like to change for next year, like better forage in the field and maybe even a little more spacing around the hives, but it seems like a successful year so far. Blue is the color of the year for the marked queens, and I guess it’s fitting that our queens are marked Duke blue. Obviously NCSU couldn’t win because it wasn’t a red year for the queens. Yeah, I’ll stick with that.