This year, we decided to shake things up a bit and give The Carolina Honey Bee Company a coronary with an order of over 500 packages. We mostly managed to up our game with our scheduling this year and contacted Mark Bennett at Dadant early enough this year that ordering equipment for 550 double deep hives with robbing screens and queen excluders wouldn’t be as much of a stress in his inventory (unlike the year that we literally bought out his warehouse in Virginia). We started off with our game plan of “how can we do better than the last two years?” and went from there.

Setback 1: Not Enough Equipment and Space 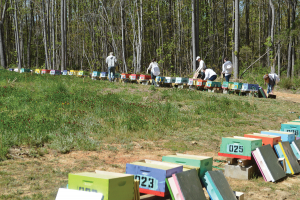 The hives are set up and ready to go.

In previous years, we either had issues with the equipment not arriving on time due to shipping difficulties or the company-who-shall-not-be-named backing out of sending it and giving us our check back. Some of it was oversight, where we forgot that we need a ratchet strap for each hive, or we needed to have identification tags on all of our frames before the bees go in (trust me, the ladies don’t like having the tags put on post-installation), which means we had to have thousands of metal tags cut out beforehand. We have to have around 40,000 pounds of sugar ready to go, with working pumps and tanks and hot water, and also an apiary to hold the hives. 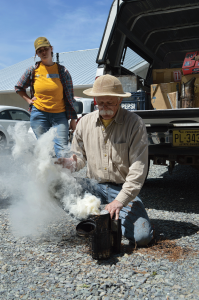 Don Hopkins gives a training on lighting a smoker that makes it look easy.

We had just cleared the land for our first site, but there wasn’t enough open area that was safe to drive on where we could put the bees. In this case, all 200+ colonies went along one side of a 500 acre field on pallets. This was a little claustrophobic for the bees and the beekeepers. Our sugar costs came through a secondary distributor and cost a decent amount of money, but arrived on time. It had to be stored off-site because of the quantity, and a lot of time went into going back and forth for sugar pickup. We did not use any pollen substitute. Some of our equipment was a temporary fix until the remaining pieces came in.

The same field was cleaned up and we could now put these 200+ hives spaced out on stands all the way around the field. It had a late season planting of buckwheat, and some of our other nearby fields were planted in buckwheat as well. Our sugar was ordered from a dealer working directly with the manufacturer and was able to deliver the sugar for a lower cost. We still had to keep our sugar off-site to maintain climate-controlled storage. We tried using pollen patties, but they were kind of gross and the bees didn’t really like them. Dadant was our sole point of hive equipment and everything was taken care of in plenty of time for painting and assembly. We had two package installations, and the second one of another 200+ took place at a cooperator’s field. This reduced stress but was a little bit of a drive for feeding and maintenance. 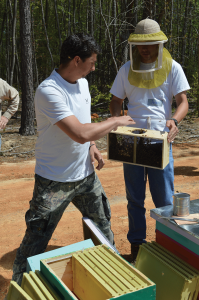 My bees are at it again – harassing the neighbors.

The original field was planted in the Fall with a vetch/clover mix that was just starting to bloom at our first package installation. We had a bee building put up in the top corner of the field, so we have a close location for equipment storage and making sugar syrup. The new building also comes with a large cooled room that can hold the sugar shipment, reducing the off-site driving. We bought the Dadant AP-23 pollen patty mix in powder form this year and made our own. This was a hit with the bees and made it easier to dose the same and keep the hive beetles under control. Equipment was ordered in 2015 (for the most part) and some things were bought locally instead of having them shipped with the possibility of not receiving them on time (like ratchet straps). The package installations were distributed between the original field and two additional fields to further reduce the stress, with the sites being split roughly 200/230/120. These two fields were slightly closer, with about three miles between each site, so the driving was reduced while keeping the bees separated.

It is difficult to meet our criteria for bees, particularly when we are extremely demanding and add to our orders randomly and without notice. Most of the time, there are no bees to be had if you order past January, and sometimes they have to be ordered before that. We also require mated sister queens with a written document explaining such, and they have to be marked. Sometimes we want three lb. packages and sometimes we like four lb. packages. It all depends on what we want to do with the bees and how fast we know what we want.

We started way too late in 2014 and had a deficit to beat. Bobby called a ton of places trying to get the packages we needed, only to accidentally stumble on The Carolina Honey Bee Company. They were able to get all our bees ready in the time frame that we needed, and we drove down to pick them up. In the meantime, someone else had ordered 25 packages from a distributor in central NC and we picked those up and installed them the same day. These bees didn’t even have the syrup can tapped to keep them from starving, and they were the most aggressive bees I’ve encountered in this part of the south. Not one of them survived the winter either. Our bees from TCHBC were pretty docile and survived fairly well from both the package installation and overwintering. We shook packages on a Saturday, but it took us two days because of equipment being late and inexperienced help (not to mention angry bees from shaking). 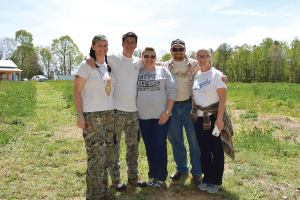 A few friends and family stopped in to pick up a couple of packages and help get the hives ready for installation.

We were pretty happy with TCHBC bees from the year before, so we reordered from them, with the caveat of them delivering for us and bringing some experienced help to install packages with us. We also needed 200 4 lb. packages, where the fourth pound is shook in over the other three. They brought the bees up both times, no problems, and we only had to wear a veil in the deep summer during dearths to avoid aggression. We did one site with shaking, and one site with just sitting the opened box in the hive with the queen between frames. The first installation with shaking the bees resulted in a massive swarm that can be seen in last year’s package installation article. The second installation was an overcast day with a light mist of rain, and it worked out really well for the bees and installers.

Out of our techs from the year before, five of our people were able to be hired full time permanent, giving us some experience in the field. On top of that, Tim was able to bring some help out with him for package installation. Bobby did a package installation demo, and everyone got to work. We closed the robbing screens, pulled the queen out, and sat the box in. A group of people went behind everyone feeding, and the bees stayed closed up until nightfall. We only had about 1% failure rate out of all of the installed colonies, and no swarms. It seemed to take an average of about one hour for every 50 packages. (this is the whole group, not one person).

Training for all aspects of a job is important, but knowing what to train and how to train is a different story. Sometimes, common sense is really not that common, and once you’ve done something for a long time, you don’t realize or remember what is confusing or difficult when it comes second nature to you.

This was our first year at our current job, although it wasn’t our first package installation. Most of our help had not ever been around a hive at all, much less installed packages. Let’s just say it could have been smoother.

We had a lot more experience this year just by dealing with new people the previous year and understanding what would be the potential problems for everyone (pull the cork ONLY out of the CANDY end) and doing a much better job demonstrating what needed to happen for successful installation days. We had Tim and his crew from TCHBC helping, and Don Hopkins came out to provide some oversight to our newbees. Most of our people had at least some science or outdoor background, and everything was a lot more calm.

Since we were able to keep five of our techs from the previous year, we had additional experience in the field to help mentor our new people. Although we still used this as the first day on the job for all the new techs, it was a lot more guided with a closer ratio of experienced to non-experienced people. We had about nine experienced people to nine inexperienced people for the first installation, and about seven to six at the second installation, not counting a couple repeats from the first package installation. We had very few stings and Bobby and I didn’t have to wear a bee suit at either installation – although I might should have at the last one (rainy didn’t make happy bees).

After reviewing our shortcomings each year and figuring out ways around them (or just learning by default), I think we’re definitely on the right track for keeping our bees healthy. Overall, we’ve been able to make our package installation days a lot better:

Our hope is to be able to keep getting better each year, with bigger installations, more successful colonies, and more experienced people kept on permanently!