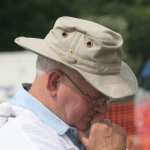 When I first came to the Ohio State bee program in 1978, one of the few luxuries the young bee program had was a bee blower.  Ironically, at that time, the program only had about ten badly overworked hives. The program later grew to just under 400 hives.  In the very early days of the program, there was precious little use for a bee blower, but there it was. In truth, it was an early backpack leaf blower with an ever- so-slightly modified air tube to make it just a bit more suited for blowing bees from supers. 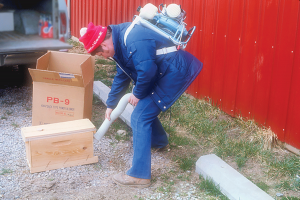 The brand new bee blower before being stolen.

In retrospect, I suppose it is humorous that the crown jewel of the bee program was stolen within two weeks of my employment with the program. At the time, it was a mighty mystery at the school.  Reports were completed and police interviewed potential suspects, but – for crying aloud – it was a small, portable leaf blower. Just pick it up and go. It was never seen it again.

Even earlier, at the University of Maryland, I extensively used a Dadant Tripod bee blower. Without minimal modifications, this device is still manufactured today. It is heavy and solidly dependable. For you small engine authorities, the oldest units had a Tecumseh 5hp engine with a vintage float/needle valve carburetor.

During my years, I had a major part in wearing out the engine and hose on four of these units. That took a long time. This blower has always been simple and easy to use. Beekeepers typically arrange for the heavy device to be strapped to a hand truck to move it from hive to hive.

A common modification was to buy vacuum line unions and join two or three vacuum lines together to make one very long line that reduced the number of times the device had to be moved. 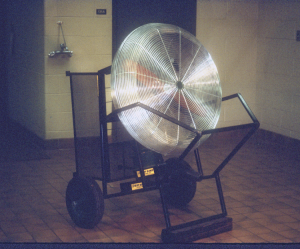 The pinnacle of bee blower systems

It was a gasoline-driven 34” propeller within a typical fan blade guard. The propeller was wooden and was perfectly balanced. All those years ago, I heard a rumor that the company manufacturing the propeller also produced wooden airplane propellers. Supporting this large blower device was a separate smaller simple leaf blower.

The plan was for the beekeeper to stand in the slipstream of air from the big fan while running the smaller blower to remove bees from supers. The beekeeper was kept cool, smoke was not required, and bees were blown from the immediate area by one or both of the blowing devices. A work stand was included on which full supers could be positioned for removing bees from equipment.

Though I do not know the true reasons for it not being available today, I do know that the device was heavy and had a large footprint. Once in place, it worked nicely, but getting to the yard, and subsequently, moving it from one hive to another was a chore.  Additionally, a mat of trapped bees would accumulate on the backside of the blower. Screening prevented the 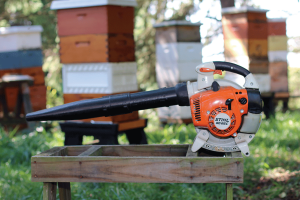 bees from passing through the fan, but over time, the output of the fan was greatly reduced as the “bee mat” thickened on the backside of the propeller guard.  These shortages could have been addressed in later models. I suspect it was too expensive for most of us.

As is the case with nearly all of the beekeeping equipment at the Ohio State bee lab, this device was destroyed in a tornado that stuck the bee facility in 2010. Only this poor quality photo remains.

Now, we are back to leaf blowers

Now, other than the Dadant unit, we are all back to using leaf blowers. As has everything else, leaf blowers have improved. They have become smaller, lighter, and more powerful. These multipurpose devices – annoyingly noisy that they are – have become a staple in many beekeeping operations. It should be noted that some leaf blowers are electric.

Some of my bee blower observations

For removing bees from larger numbers of hives, many beekeepers use a combination of chemical repellants, brushes, and blowers. Also, shop vacuum airflow can be reversed allowing them to become blowers. As stated above, work fast to get the job done. The bees will not readily let their honey be taken, and they will express their views. For a while, chaos will reign. Give them a few days to settle down.

For all of you who are wondering why I made no mention of escape boards, Porter escapes, simple brushing, or removing honey during cold months, my discussion here only concerns either electric or gasoline-powered blowers.

Essentially any kind of common blower or vacuum device can be modified – one way or the other – into a bee-vacuuming device. The premise is that a trap should be in the vacuum line that prevents the bees from passing through the blower impeller. You are only limited by your imagination1. Dadant bee blowers, shop vacuums, and leaf blowers can all be modified to become vacuums. As time has come and gone, various companies have manufactured vacuuming devices. If you have an interest is purchasing a vacuum trap, check bee equipment catalogs to see what is currently available. 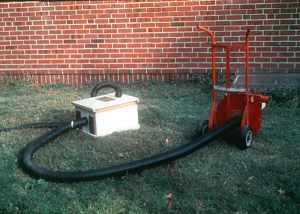 The 1976 model vacuum device. The smaller vacuum line entering on the top empties into a screened package bee cage.

Many years ago, when I was a graduate student at the University of Maryland, I needed to monitor the weight of wintering colonies. It was cold outside. So I vacuumed inside. I developed the vacuum that is pictured here – except I used a shop vacuum. At first, I modified a deep super to serve as the trap, but in later generations, I built trap boxes that would specifically fit the screen-shipping cage. I initially used 4” plastic drain line as the air supply line from the vacuum to the trap device. Later, it became much easier just to use the same sized vacuum lines as the airline. I tell you this because my photos may show variation.

The thin rectangular board on top covers a hole. Opening or closing the top gate controlled the rate of vacuum airflow. That simple procedure was more precise than trying to control airflow with the engine throttle. The simple 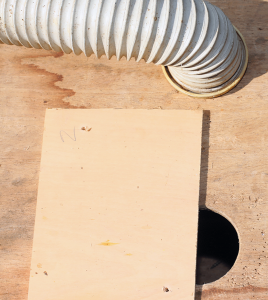 advantage to this prototype was that it could be made from readily available deep supers – but just a bit not deep enough. Note the unpainted spacer that was required to raise the lid enough to clear, but still fit tightly against the internal cage.

Later trap variations were a bit smaller but taller. Additionally, a telescoping lid could be hooked to the trap box. The earlier model required that the lid be ratchet-strapped to the trap.

Within the trap box, a bee package-shipping cage prevents the bees from moving into the shop vacuum canister. The bees collect within the package cage. One shortage of all vacuums of which I am aware is no way of estimating how full the collection cage is.  Over time, the operator gets a feel for how many bees have 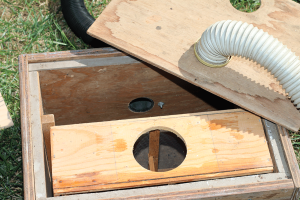 The bees are captured within the cage while the vacuum air exits through the black tube in the opposite wall.

passed down the tube. As stated earlier, but importantly, the small board on top controls the amount of vacuum pressure. Obviously, too much pressure will damage or kill bees.

I only mention vacuum cage devices in order to briefly explain how I vacuumed bees inside the bee lab. I built a simple collapsible cage with wooden framing and plastic film sides and tops. It would fold reasonably flat for storage and had an opening for allowing the vacuum hose to be fed into the cage. It worked nicely. 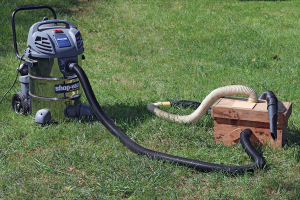 Shop vac modified to provide vacuum to the trap box.

top. At the URL posted at the end of this article, I have included photos showing a 1940s robbing cage that was used by university scientists for research work. When used in a hobby apiary or queen producing operation, such a simple cage would be a useful robbing control method.

Some of my bee vacuum observations:

Once bees are vacuumed, the vacuum device must continue to run. Confined bees will quickly overheat.

With the vacuum running at a brisk speed (gasoline), the vacuum line can be removed.  Though bees, attempting to escape, will ring the bottom side of the opening, they will not be able to crawl against the air blast. 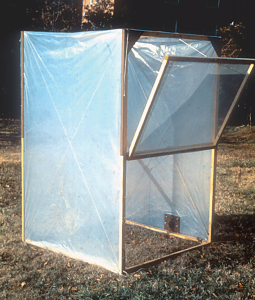 The shunt used to control air pressure flow is critical. Too much vacuum and the bees will be battered to death. Too little pressure and the bees will not be pulled from the combs. Bees passing beneath your hand in the vacuum line should feel as though they are made of velvet. If the passing bees feel like dry pinto beans, too much vacuum is being used. An indication of proper pressure on the comb is bees that will hold on for only a second and then be vacuumed.

Once bees are vacuumed, let the air flow run to prevent overheating the captured bees. An observation, if captured bees are allowed to overheat a bit, drones will die first.

When vacuumed bees are released, they can be extraordinarily aggressive.  Be ready for that possible behavior.

I have never killed a queen by vacuuming her, but I always try to find her before vacuuming. I would not recommend intentionally sending her down the tube.

While the vacuum is running and some bees have been trapped, drones from surrounding colonies are attracted to the bee-scented airstream produced by the vacuuming process. I always wondered if a tethered virgin queen could be presented to the drones in that airflow. If you try this, let me know the results.

Can you help me?

A non-beekeeping company has asked me to help design a professionally styled observation hive for a nature center that is currently under construction. In addition to many other high-end nature exhibits, this will be a high quality bee display.

Have any of you visited such facilities with an impressive observation hive exhibition. This will have to be viewable year round. It will be in a warm climate. Have some of you seen something really impressive?

Any help would be greatly appreciated. 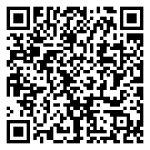 1An older article with more construction details is at:  Early Bee Vacuum Article

Regardless of your opinion of what neonics are doing to pollinators in general, or honey bees in particular, the overview of this situation, and…