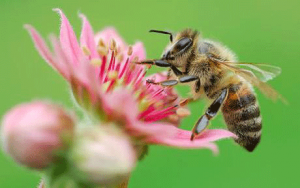 Medlar and quince share some common traits. Members of the rose family, both are uncommon, old fashioned fruits that have largely fallen from favor. Fairly small trees or shrubs with great ornamental value, these were widely popular during the Middle Ages.

Thriving in zones five through nine, the plants originated in Persia and the Caucasus. These bloom later than apples and pears. At the same time, they’re good bee plants like most of the related fruit trees. 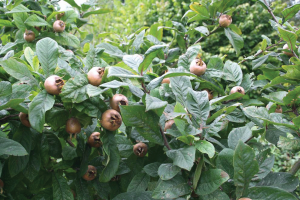 The picturesque medlar (Mespilus germanica) has earned a place in the bee garden alongside other fruit trees. They can survive for several centuries.  Cultivated by around the 2nd century B.C., it was grown by the ancient Greeks and Romans, who enjoyed the edible fruits.

The plant was first described by Theophrastus (about 371-287 B.C.), a Greek naturalist and philosopher. Ancient Greeks ate the fruits fresh and dried and used them for medicinal purposes just as the Europeans did later. This was introduced to England as well as to other areas of Europe where it naturalized and now grows wild in woods and hedgerows. 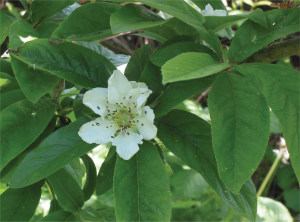 French folklore attributed magical powers to the tree. According to myth, it offered protection from witches and sorcerers and could protect their homes from enchantment.

William Shakespeare mentioned medlar fruits in several of his plays, while Geoffrey Chaucer alluded to them in his tales. The fruits remained popular during the Tudor and Victorian eras.

Medlar plants were introduced to North America by European colonists. John Bartram received plants and cuttings along with medlar seeds from England. During the 1800s, interest in medlars waned in Europe, England, and America. Nowadays, they’re most popular in the Piedmont of Europe.

Sometimes spiny, this deciduous, crooked, gnarled tree or shrub is only 15 to 25 feet tall and wide. It features a widespread, rounded crown with dense branches that form sharp angles. The plant matures very slowly and can take two decades to reach its ultimate height. The young growth is hairy. The twigs are also downy.

Three to six inches in length, the thick, deep green, alternate leaves arise from very short stalks. They’re finely toothed near the tip. Hairy when young, the foliage can be lance-like, oblong, or oval-oblong.

This can display various bright colors during the Fall. A variety with variegated foliage is grown in some areas of the world. However, this is rarely available in America.

Medlar flowers appear from May to June, depending on location, for about ten days. The large, showy, ruffled, solitary, stalkless blooms, which resemble apple blossoms, are 1½ inch across. Initially white and fading to pink, these open at the ends of the shoots on the new growth as the foliage unfurls.

The blossoms contain five long, narrow, lance-shaped to rounded petals and red anthers. The woolly, pointed, leaf-like sepals remain on the fruit as it grows to maturity.

Bees are very fond of medlar flowers. The nectar arises from a yellowish circle at the base of the blossoms. In America, there are rarely enough medlar plants to yield surplus honey. However, it provides very good honey crops in some European countries.

Medlar plants bear annually beginning at about three years of age. The brownish fruits can vary somewhat in shape. They resemble a flat topped apple with the shape varying from flattened globes to spherical, conical, or elongated.

The blossom ends with their persistent sepals are unique among fruits. These remain open, exposing the inner space containing the seeds that are clearly visible.

Medlar fruits are generally about two inches in diameter and about half as long. Depending on the variety, these can weigh up to three ounces or so. The fruits lack the core that is seen in the related apples and pears. The seeds are enclosed in stony, hard capsules that are easily removed by straining the pulp.

They’re suited to most any soil provided it is moist, well drained, and relatively rich. Medlars are well suited to the Gulf and the South Atlantic regions.

If planting a grafted medlar, the graft union should be placed below the soil surface, which is contrary to most grafted plants. As with any fruit planting, keep the plant watered as needed until it becomes well established.

Although medlars can be grown from seed, the grafted trees tend to bear larger fruits. Somewhat slow growing, these require very little pruning other than the removal of crossing or diseased branches.

Medlars are generally free of disease and insect problems. Sometimes, rust does occur.

About a dozen medlar varieties are available worldwide. At least three of those can be found in America. These include Breda Giant, Marron, and Royal.

Initially, the fruits are very hard and inedible. These are eaten once they’re overripe. Harvest after the first frost, which begins the ripening process, which is known as bletting.

Store medlars in a cool dark place until they ripen enough to eat. A traditional way to store them is in sawdust or straw. They can also be placed on a wooden shelf. For best results, avoid storing them on plastic surfaces.

Over time, the fruits become soft and overripe. With the texture of baked apples, the raw pulp has been compared to unsweetened spiced applesauce. It has a characteristic, wine-like, slightly acid, sweet flavor.

Victorians ate the raw pulp with cream and sugar. They also stewed the fruits lightly and made them into jam. Medlar paste, which is similar to lemon curd, is popular in some parts of Europe. The paste contains medlar fruit pulp, eggs, and butter.

The fresh fruits go well with wine. They’re made into jelly, comfit, and cider. For dessert, roasted medlars are flavored with butter and cloves. Add sugar and whipped cream to the raw pulp for a quick, easy dish. 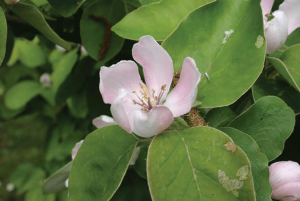 Quince (Cydonia oblonga) has been cultivated for over 4000 years. The Greeks and Romans dedicated the fruit to the goddess of love, Aphrodite. Quince fruits are mentioned in the Bible as well as in ancient Babylonian and Assyrian texts.

The plant was widely grown in most of Europe – particularly the Mediterranean region – and Asia long before the apple. It has naturalized in Europe and England. 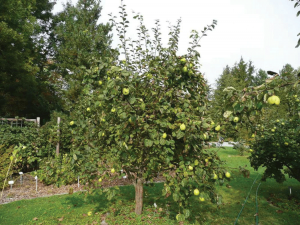 Quince plants were brought to North America by European colonists. At one

time, this was more popular in America than apple and pear trees. Interest in the plant began to diminish in Europe and America during the 20th century. These tend to be most popular in warm regions of the world, including Italy, Spain, Greece, and the Middle East.

This fast growing, small, bushy, round-topped tree or shrub can become contorted with age. It features black bark and crooked branches. Generally only ten to 12 feet in height, the plant has occasionally been known to reach 20 feet. The shoots are hairy.

The short stalked, greenish-gray, alternate foliage, two to four inches long, can vary in shape. It ranges from oval, rounded, oblong, or broadly ovate to elliptic. Sometimes toothed, the leaves are hairy underneath. They turn a lovely yellow in the Fall.

The large, showy, solitary, stalkless flowers can be white or pale pink. With a goblet-like shape, they resemble apple blossoms, but are larger – up to 2½ inches wide. These emerge at the tips of the shoots after the foliage has begun to unfurl.

The flowers feature five petals and five sepals. The size, color, and shape of the petals are variable.

Along with other fruit plants in the rose family, quince flowers are eagerly sought by bees for nectar and pollen during the Spring. The plants usually aren’t numerous enough to bring surplus honey, although they’re helpful to brood rearing.

Quince plants provide good fruit yields and begin bearing at about four to five years of age. They can continue bearing for perhaps 40 years.

From flower to fruit is about 150 days. The stemless, hard, heavy fruits can be green to yellow or orange. They usually ripen to yellow, but will still be firm. These remain fuzzy until they ripen.

Quinces resemble a cross between an apple and a pear. The flesh is whitish-yellow. A single fruit is so aromatic that it can perfume a room. Historically, these have been used as room deodorizers.

Usually slightly larger than a baseball, these are variable in size. The largest ones are about three to four inches long. They can weigh up to a pound.

The shape of quince fruits can vary. They’re often blocky and irregular to pear-shaped or plum-like. Some are round or globular.

There are several sub-species of quince. About as easy to grow as the European pear, the quince is relatively low maintenance and trouble-free. This has a low chill requirement of only 300 hours or so.

In northern areas, the fruits don’t always have sufficient time to ripen before the onset of cold weather. The best variety for cool climates is reportedly Vranja.  Quince fruits ripen best in areas with long growing seasons.

Withstanding high humidity, quince requires full sun. The plant thrives in a deep, rich, moist, well drained, heavy soil with a pH ranging from nearly neutral to acid. It will tolerate a slightly wetter or drier soil than most fruit trees.

Space quince plants ten feet or so apart. They can be trained just like any other fruit tree to develop a strong central leader and a very full, round shape. These can also be left untrained to assume their naturally bushy shape, a method that requires very little pruning other than removing crowded, damaged, or diseased branches.

If young plants produce straggly growth, head this back. Older plants tend to produce suckers, which should be removed. Pruning is best done in late Winter and early Spring.

Some quince plants bear such large crops that the limbs can break. If necessary, provide strong supports for the heavily laden branches. On occasion, the fruits might benefit from a thinning if a plant consistently overbears.

Avoid overfertilizing quince plants – particularly nitrogen – for this can promote fire blight. Phosphorus and potassium are beneficial to quince. Usually, an organic mulch and an application of compost can provide enough nutrients if the soil is rich.

Quince is generally propagated by grafting, dividing, and layering. Seeds can be used, but the plants will be quite variable and could produce either apple-shaped or pear-shaped fruits.

Before buying a quince plant, check to see whether it requires cross pollination. Some varieties are self fruitful.

Avoid digging around quince plants for these are shallow rooted. They can experience some of the same potential problems as other fruit trees, such as fire blight, rust, caterpillars, and occasionally borers.

A number of quince varieties are available in the U.S. These include classics, such as Cooke’s Jumbo, and Smyrna as well as newer ones from Russia and Turkey.

Normally, the fruits are allowed to ripen before harvesting. However, they can be picked earlier if you plan on storing them for long periods. These keep well on the tree.

Cut the fruits from the plant rather than pulling them loose, which can damage the stems. Handle quinces carefully for they tend to bruise very easily.

In areas with lengthy, hot Summers, quince will ripen on the tree from September to December and will be sweet tasting and soft enough to eat raw. When grown elsewhere, the fruits can sometimes be astringent, tart, bitter, and hard. These contain lots of seeds, which are easy to remove.

Quince fruits are used mainly for jams, jellies, and baked goods. During the cooking process, the quince flesh turns red and contributes a lovely color to pies and other cooked fruit dishes. The related flowering quinces (Chaenomeles spp.) bear similar looking edible fruits that can be used the same way as true quinces.