Have you ever wondered how beehives, hive tools and bee keeping procedures developed? 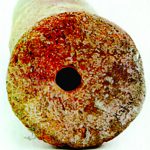 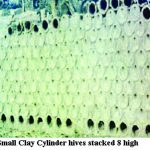 The first reference to honey bee hives that I could find is in Psalms 81:16 and Deuteronomy 32:13 which mention that “honey came out of the rock”. Reading elsewhere, I read that this meant that the bees were living in the clefts of the rocks and elsewhere in the hollows of trees. Thus one has to wonder if the bees were dorsata or Italian, but there is no way to really tell. The Apis Mellifera dorsata is known to live in cliffs and the Apis Mellifera ligusticia usually pick trees as one of their places to live. 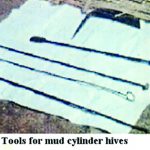 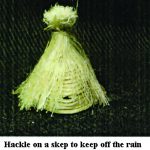 Logically the next reference to bees would be in Egypt where bees were kept in cylindrical hives made of mud or clay. Here there is some question as to the size of the hives as one source mentions that the cylinders were 38 cm long and 7.8 cm diameter and had been fired.   Another source said that the hives were 80 cm long and 44 cm diameter and were raw or unfired.  The smaller hives could be stacked in rows up to eight cylinders high whereas the larger hives were 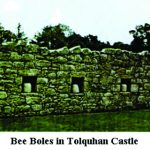 located in one area and about 100 were found. What type of bee would normally live in a clay cylinder? A further report mentioned that some bees lived in inverted straw baskets covered with mud. The bees had a mean temperament, so the beekeepers would shave their heads to avoid upsetting the bees from the oil of their hair. They wore nothing on their heads and relied on smoke to calm the bees. The small mud cylinders or tubes had an entrance hole at one end and the other end could be opened for harvesting the honey. The honeycombs would be scraped out, crushed, and strained through cow skin. The honey was then stored in sealed clay pots. The hive tools appear similar to some of the Top Bar hive tools of today.

Beekeeping was done in Europe, Asia, and Africa, but most of the recorded literature on bees came out of Europe.

Honey bees were not native to America and the first accounting of honey bees was on a ship’s manifest of 1622.

The next beehives seemed to be gums, logs, and boxes. These could be as simple as cutting a section out of a tree that contained bees or to hollow out a log for the bees. Of course all of these items were various shapes and sizes and made it difficult to see what was happening inside. Sticks were jammed in the top of the gums or logs and the bees would use them for the guides for the combs. To harvest the honey, you would have to use a knife or a tool that could reach as far as you wanted to cut out the honeycomb. Beekeepers using a plain box allowed the bees to build their comb in any direction that the bees wanted.

In 1852 Langstroth harnessed bee space, which led to the invention of the moveable frame. I won’t rock the boat here, but Langstroth was familiar with Huber’s leaf hive of 1789 and the work of Dzierzon because Sam Wagner translated Dzierzon’s writings for him. So Langstroth developed five different hives which all used the same size frame. It is very interesting that the size of the “Langstroth” frame is basically the same size as the Hoffman frames, only with longer ears. However the original Hoffman frame was thinner. Now did Hoffman copy Langstroth or vise versa? When Langstroth built his hives, he used packing crates that had been discarded. Since he used a sliding table saw, it was more convenient to make the height of the boxes the same height as the crates and the joints of the boxes were butt joints.  Thus we got standardization of the deep supers and frames until the lumber sizes changed in the 1950s.

Because bee space was defined and frames were now being used, many types of bee hives were developed. Many of the frames were made to fit a particular cabinet, dresser, or hive. Since they didn’t have the foundation for the frames, the beekeepers would use frames that had a “V” on the top bar.

Some hives had a pointed or very sloped bottom. For those hives it was necessary to have legs to keep them upright. The hives with the pointed bottom offered excellent drainage of moisture and debris.  However, many of these hives had frames that fit only certain places in the hive. This probably is the reason that books mention that you should not move frames around.

The slanted bottom board may have led Walter Diehnalt to develop the sloped bottom board. Its main purpose was to eliminate moisture within the hive. It never really caught on. Perhaps beekeepers would support the hive from the bottom board rather than the side rails and the hive would tilt backward.

According to my records, there were 1,119 beehives patented between April 11, 1810 and October 2009. Only 80 of the hives were patented before Langstroth was granted his patent October 5, 1852, but afterwards there were 822 patented beehives up to March 7, 1916 when Danzenbaker was given his patent. Now I know that a person must make some changes and refile the patent to keep it current so the actual number of different patents is less than what I have stated, but it shows that there were several “inventors” that got their inspiration elsewhere. However there are several independent thinkers among the inventors.

There were hives with gabled roofs, finials, drawers, and working doors. These were probably so fancy that no one wanted to make one to use. There were hives that were Bee Condominiums, maybe the forerunner for two, three, four, and eight hive systems. It used to be that a patent didn’t really have to work. Some patents will have a different nomenclature to avoid duplication of another’s idea. A beehive could be a skep, gum, hive, moth trap, or any other set of words to make it a different patent.  Sometimes a device may be identified for what it does rather than the commonly accepted name.  One reason that a person will do such a thing is to “update” the patent so it is good for another term of years or to fool the inspectors that this is a completely different patent. Thus if you look through the various patents, you will see many similarities.

In 1905 there was a hive that featured a ventilated bottom board and stand. In the patents, you may see hives, tops, bottom boards and bee suits that are ventilated.

In 1907 the ideal hive tool and the Sawyer bee knife were introduced. Could these have been the forerunners of some of today’s hive tools?

In 1908 there was a hive that you could harvest the honey without going into the hive. It employed a vacuum pump to draw the honey from the hive. I suspect that there were problems in removing honey before it was ripe, and filtering the honey so it didn’t have wax and bees along with other things.

Charles Muth of Cincinnati, Ohio is given credit for developing the “Muth” jar. In my collection of honey jars, I have similar jars that were produced by I.J. Stringham, of New York City and a jar by Mr. Pounder. There may be some slight differences, but the jars sure look alike. Both Muth and Stringham advertised jars for sale in the 1901 issue of Gleanings in Bee Culture.   In later years the Muth jar was reproduced and carried a mold mark of Honey Acres but it is now in production with still a different manufacturer. 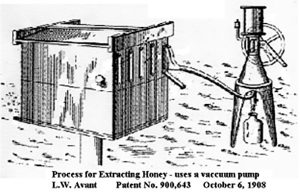 There are many more things that have received patents and in later years you may notice that similar items are made, which makes one wonder if it really is an original thinker or someone has noticed a previous idea and made some changes.