Zap! Stings happen. Even the most experience beekeepers catch a sting occasionally.

It’s the price we pay for those beautiful jars of honey. Bees aren’t “seek and destroy” insects. They really aren’t 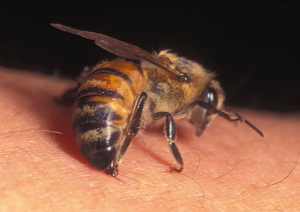 itching for a fight, and are quite content to ignore humans. After all, they have work to do. We’re basically a nuisance to them, so stinging is really a last resort for a bee. But, they are, in the end, social insects and protecting the hive is Job 1. So if a worker bee senses a threat, it will sting and then use alarm pheromones to call in the cavalry. It’s these chemical weapons in the bee’s arsenal that have scientists fascinated. Bees are remarkable, so it’s little wonder that their venom is proving to be an amazingly complex and useful substance.

Bee venom is mostly water-88% to be exact. Because of this water solubility, bees sting in moist tissue in order for the venom to disperse effectively. Unfortunately, that’s why the venom works so well on humans – we have lots of nice moist tissue. Painful to think about, huh? Unlike alarm pheromones, bee venom is odorless with a pH of 4.5 to 5.5 which can make it slightly acidic. Because of this acidity, some home remedies advise using a baking soda paste on stings to neutralize the stings. Most scientists doubt the effectiveness of such topical treatments. (That’s because the venom is injected into skin and not onto skin.)

The allergen in bee venom that causes the main “ouch” is melittin. It’s by far the most abundant ingredient in bee

venom – 50% of venom’s dry weight comes from melittin. Melittin causes red blood cells at the sting site to burst and the blood vessels to expand. This blood vessel expansion is why some people have a dangerous drop in blood pressure after bee stings. And, unfortunately, melittin isn’t the only ingredient in bee venom that causes pain. Phospholipase A2 is another protein that works with melittin to destroy cell membranes at the sting site. This ingredient, which makes up 12% of venom, causes pain and inflammation.

But wait – the pain from that one sting isn’t quite over yet.  9% of bee venom consists of histamine. Histamine causes your tiny capillaries to leak fluid. This is why bee stings cause itchy red spots. Histamine also contributes to some of the pain of the sting. Not all the proteins in bee venom cause pain. Finally, some good news, right? Wrong. Some ingredients help to strengthen the toxicity of the venom. Apamin, which makes up 3% of venom, destroys nerve tissue. Hyaluronidase (2% of venom,) helps the reaction to spread to surrounding tissue by breaking down one of the components of cell tissue.

It’s not just the chemicals in a bee’s venom that make it such an effective defensive weapon. Bees also have an excellent dispersal mechanism – their stings. Only female insects can sting, and scientists believe this is because the sting evolved from the insect’s egg-laying organ-the ovipositor. The structure of this modified ovipositor allows the sting to act like a self-guided missile. The bee doesn’t need much force to embed the sting into its victim; the barbs are positioned on the sting in a way that helps pull it further into the wound. Attached to the sting is the bee’s venom sac, containing the bee’s chemical cocktail of mellitin, histamine and other proteins. When a bee stings, venom is released into a space on the sting between the barbs and the stylet. Honey bees won’t sting unless they sense a threat, because they can’t withdraw their stings. Once they sting, they die.  The venom sac and sting of the bee are torn from the abdomen and left behind. Amazingly, even when the sting is no longer a part of the bee, it can keep pumping venom into a victim. That’s why getting the sting out quickly after a sting is important.

When a bee stings, an alarm pheromone is released by its Koschevnikov gland. Located near the sting shaft of the worker bee, this gland is responsible for most of the bee’s alarm pheromones. When worker bees detect this alarm pheromone blend, they fly faster and buzz more. It’s a bee home security system. It signals the defenders (aka stingers) to seek and sting threats. That’s why it’s a good idea to apply two or three puffs of smoke to the sting site after removing the sting to mask the tell tale alarm odor.

The alarm pheromones of honey bees contain about 20 compounds. Of these, isopentyl acetate is the key compound. Bees begin to produce this IAA (also known as isoamyl acetate), at about day 15. The production will peak at 2½ weeks. IAA has a very familiar smell, because it has the exact same chemical composition as banana oil. That’s why there’s a banana smell when bees sting another animal. Fortunately, smoke tends to mask the smell of this pheromone. This loss of signal results in just a few angry bees rather than a swarm of stingers ready to defend the colony.

Bee stings are one of the hazards of the beekeeping trade. They are inevitable, even when every precaution is

taken, and researchers are working on ways to reduce the impact of the bee’s venom. Because the sting keeps pumping venom into the sting site, scientists are realizing that the method of removal isn’t nearly as important as getting the sting out-ASAP. In the past, the rule of thumb was to avoid pulling the barb out with fingers or tweezers. The thinking was that more venom would be squeezed in. Now scientists are advising speed over precision. Forget digging around in your wallet for a credit card to scrape it. Unless it’s handy, that wastes time. Studies have shown that leaving the stinger in just eight seconds can increase the size of a bee welt by 30%. It doesn’t really matter how you remove the sting; just flick it off as fast as possible. Your hive tool is the perfect scraper, by the way.

Once a bee stings, your body chemistry begins to change to combat the toxins. Because your immune system considers the unknown proteins of bee venom to be invaders, it makes antibodies. The job of these antibodies is to strengthen the immune system against future attack. Unfortunately, some people develop an overly-sensitive immune response. In about 5% of the population, bee stings are much more than just painful – they’re life threatening. Two out of every 1000 people are at risk of anaphylaxis from bee stings. This inability to breathe can occur within seconds or minutes. Beekeepers who are prone to other allergies have a much greater risk of developing these severe allergic reactions to venom.

Most adults without known allergies can tolerate about 10 stings per pound of body weight. In the event of multiple stings, it’s a good idea to see a health care professional. That’s because your kidneys might need monitoring for a few weeks. When a sting occurs, cell tissue is damaged. The kidneys’ job is to eliminate this damaged tissue. In the case of multiple stings, however, there may be too much damaged cell tissue for the kidneys to process. This can cause the kidneys to clog and fail days after an extreme stinging event.

Reactions to bee venom are classified as systemic or localized. Systemtic reactions require immediate medical attention. Swelling in these reactions may occur in areas other than the sting site. Shortness of breath, dizziness and a drop in blood pressure can signal anaphylactic shock, which can result in death if not treated. The usual treatment for these allergic emergencies is epinephrine. This form of adrenaline slows the blood pressure drop by forcing the blood vessels to constrict. It improves breathing by relaxing the airways and also helps to reduce swelling and itching. Once an allergic reaction has occurred, it’s necessary to carry an Epi-Pen or sting kit at all times. Doctors also advise wearing a medical alert bracelet.

Most localized reactions to bee venom (except stings to the eye) can be treated at home. Swelling is normal in a bee sting and ice helps because it constricts the blood flow to the sting site by narrowing the blood vessels. Less blood flow means less swelling. A few topical ointments, such as calamine lotion, can also offer relief. Calamine lotion helps because its crystals are large and cause moisture on the surface of the skin to evaporate quickly. Much like an evaporative cooler, this rapid absorption of moisture helps the skin feel cooler. The histamines in bee venom that cause itching, swelling and pain can be blocked by certain medicines. The molecules in the cell membrane at the sting site are called receptors. Histamines “turn on” these receptors when bee venom invades tissue. Antihistamines, such as Benadryl, work because they keep these receptors from “turning on.” Thus, the capillaries don’t leak fluid and swelling is reduced. Pain relievers that contain aspirin should be avoided with bee stings. There’s already quite a bit of bleeding under the skin and aspirin makes it worse.

Even though the chemical compounds in bee venom can pack quite a punch for predators, those same compounds have the potential to be remarkably effective in medicine. Researchers have discovered that melittin is a strong anti-inflammatory agent. When venom in injected into the body, the melittin stimulates the production of cortisol, also known as the “fight or flight” hormone. In addition to giving the body an extra boost of glucose energy, cortisol also reduces inflammation. Scientists hope that the use of melittin will aid patients with diseases such as arthritis and MS, where inflammation can be debilitating. Melittin has also been shown in laboratory studies to slow the growth of certain cancer cells, such as melanoma and breast cancer.

When researching bee venom for medical purposes, scientists begin with dry bee venom. When exposed to air, venom dries into grayish-white crystals. These crystals are then converted into a powder form. The hope is that this powdered bee venom can be used to produce injectable venom for the treatment of certain diseases. Because it takes a whopping one million bee stings to collect just one gram of dry bee venom, it’s quite expensive. Scientists are developing an artificial form of melittin in order to further their research.

Bee venom is a complex substance, and laboratory research into its medical applications is relatively new. Although many people swear by at-home bee therapy, known as apitherapy to treat their MS and other conditions, science moves a bit more cautiously. Bee venom is a toxin, so a scientific approach to research and treatment must be taken. Even so, the hope is that bee venom may lead to medical breakthroughs for those suffering from debilitating inflammatory diseases. So, while bee venom might sometimes be a pain, it might also be a cure. Maybe the occasional “zap” isn’t such a bad trade-off after all.

Hunt, G.J. Flight and Fight: A Comparative View of the Neurophysiology and Genetics of Honey Bee Defensive Behavior. Journal of Insect Physiology 53 (2007) 399-410.