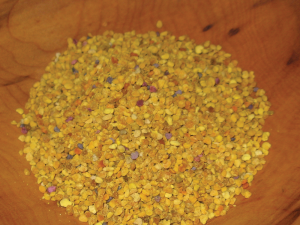 Last month we looked at bee pollen: what it is; how it is collected by both the bee and the beekeeper; and some of the ways it is used by both bees and humans. This month, we will explore the constituents that make-up bee pollen and some of the potential nutritional and medicinal benefits for you and me.

Bee pollen is a highly nutrient dense food. As a result, it can be very beneficial in dealing with health issues that are either caused or aggravated by a poor diet. The composition of bee pollen can vary greatly because plant pollen sources vary by location throughout the world, as well as by season and by year in a given locality. (O’Rourke and Buchmann, 1991, Nogueira, et. al., 2012) While pollen protein contents between 2.5-61% have been reported, the average range is around 24%. (Buchmann 1986) Pollen contains all 22 amino acids humans need to survive and is especially high in proline and hydroxyproline, the building blocks for collagen. Clinical tests show that orally ingested pollen is rapidly and easily absorbed by the human digestive system. Most of its components pass directly from the stomach into the blood stream within two hours after consumption. Pollen is such an excellent source of protein that for most people, 30 grams (two tablespoons) of pollen a day satisfies the human need for amino acids (protein).

Pollen also contains monosaccharides, disaccharides, and oligosaccharides. The sugar content of bee pollen ranges from 15-50% and the starch content of pollen can be high (up to 18%). (Schmidt and Buchmann, 1992).

Pollen has been found to contain approximately 200 enzymes, coenzymes, and hormones (including growth hormones) that may be at least partially active in humans. Pollen also contains lipids (fats) primarily in the form of free unsaturated fatty acids, as well as lecithin/phospholipids (the main compounds in the structure of biological membranes), and phytosterols/cholesterol (the main precursor of bile acids and steroid hormones).

There are also a notable number of Vitamins found in bee pollen. The vitamins are both water (hydro) and lipid (fat) soluble and they often act as enzyme cofactors. These vitamins include Thiamin (B1), Riboflavin (B2), Niacinimide (B3), Pantothenic acid (B5), Pyridoxine (B6), Biotin (B7), Folic Acid (B9), and vitamins C and E. (Schmidt and Buchmann, 1992)

Pollen’s differing colors are primarily due to different flavonoids (e.g. red, yellow, purple) and carotenoids (e.g. yellow and orange) which besides being pigments are also anti-oxidants. These compounds have also been shown to exhibit anti-inflammatory and anti-cancer properties. Other components of pollen include: gonadotropins, which stimulate the testes and ovaries; estrogenic compounds that compete with and substitute for the body’s natural estrogens at different times; and rutin which is anti-inflammatory, an antioxidant, and can decrease platelet aggregation

No contra-indications have been discovered when consuming bee pollen, even during pregnancy. Bee pollen has not been found to be incompatible with other medical therapies; there is no apparent tolerance buildup to bee pollen even when ingested over long periods of time. No toxicity has been reported from the consumption of bee pollen even in high dosage. The exception to this is in the case of bee pollen that is contaminated with chemical pesticide residues. Given that research has shown that bee pollen is one of the primary pathways for toxic residues to enter the hive (Frazier 2008) it is important to source bee pollen from a relatively clean (preferably organic) supplier.

Unpleasant side effects of consuming bee pollen may include bad taste and flavor, a feeling of nausea after ingestion, light intestinal disorder (light diarrhea) during the first day of high dosage, gastric pains (usually only when pellets are not dissolved prior to ingestion). Potential allergic reactions may include mild reactions such as shortness of breath or swelling, to severe reactions such as hives, itching, and anaphylaxis.

The use of bee pollen in relieving allergy symptoms is based on a concept of oral desensitization where a small amount of an allergen or parts of an allergen are absorbed directly into the blood stream and the body develops a tolerance over time. While it is best to use “local” pollen, good results can also be obtained with pollen that is not local (as long as it is from the same type of plant that is the source of the allergic reaction). Local, raw and unfiltered honey has traditionally been used for this purpose but it is more efficient to use straight pollen from the plant(s) that are the source of the allergy. In addition, research has indicated that bee pollen has an anti-allergic activity because it inhibits histamine release that is the cause of allergic reactions. (Ishikawa 2008)

One treatment protocol that has been successful for some people is to start by taking a half a bee pollen granule and then, if no unpleasant side-effects that can’t be tolerated are experienced, double it the next day. Again, if no intolerable side effects are felt, double the amount again, and again until after 10 days a full teaspoon of pollen is being consumed. If side effects become too uncomfortable at any time, simply cut back the amount taken to the previous tolerable amount.

Continue ½ to 1 teaspoon per day

Among other things, the nutritional properties of pollen have the potential to be used in cases of children’s lack of appetite, developmental delay, and malnutrition of children and adults. Moreover, bee pollen is recommended for patients going through the recovery period, after surgeries, and to people working hard physically and mentally. (Attia et. al., 2011, Tikhonov et. al., 2006)

Numerous and well-documented studies on animals have shown the powerful detoxifying action of pollen. Rats were poisoned with organic solvents such as carbon tetrachloride and trichlorethylene, as well as ethionine and ammonium fluoride. Pollen lowered the level of these substances in the blood serum of the test animals, providing strong evidence of the therapeutic properties of bee pollen with regard to protecting the liver. However, when pollen is consumed with toxic substances, it protected liver cells from their harmful effect, which suggests pollen has the ability to prevent toxification. During the detoxifying process, an important role is played by polyphenols, mainly flavonoids and phenolic acids. (Komosińska-Vassev, et. al. 2015)

Estrogenic and gonadotropic hormonal stimulating materials have been isolated from pollen. These materials stimulate both male and female sex organs and may explain reports of improved sexual function in men and increased fertility in woman – (Mehraban, F. 2014; Soliman F. A. and Soliman, A. 1957)

One of the amino acids in bee pollen, phenylalanine, is thought to suppress appetite by acting on the region of the hypothalamus of the brain that is believed to control a person’s appetite for food known as the appestat. Practicing apitherapists have found that pollen has the potential to assist in both weight gain and weight loss. Bee pollen provides about 250 calories per 100 mg of pollen. (6+tablesp)

Weight Loss Regimen: 20 to 40 grams of pollen with meals twice per day and between meals- more pollen

Pollen, administered alongside anti-depressants, enables the reduction in drug dosage and improves the overall condition of depressed people within a short period. This can help decrease the number of drug addiction cases involving antidepressants and help reduce the occurrence of side effects. (Komosińska-Vassev, et. al. 2015)

As mentioned in last month’s article, worker bees process pollen into bee bread and use it primarily to feed honey bee larva. The following recipe from Andrew Kochan, MD is recommended as a way to make bee bread at home.

Recipe: Mix 3 lbs. of honey and 2.5 lbs. of pollen in a one-gallon jar. The pollen will want to float to the top of the honey, so two or three times a day for about two weeks, the jar should be turned over forcing the pollen to float slowly back up through the honey to the top of the jar each time it is inverted.  Beebread is tasty and the fermentation process adds beneficial bacterial and acids to the pollen.

For more information on the nutritional and medicinal benefits of bee pollen, contact the American Apitherapy Society www.apitherapy.org/contact/.

Ross Conrad will be leading honey bee presentations around the country starting in late February in Burlington, VT, Schenectady, NY, Medina, OH, La Crosse, WI, Salem, OR, and in both Marin and San Mateo counties in California. For more information, visit his website at www.dancingbeegardens.com/events.html