By: Kurt Knebusch and Paul Snyder

Plant these for bees, and the holidays this   year.

Here’s seven hollies that can take it when Jack Frost nips at their noses.

They thrive in bleak midwinters. They look good in the landscape all year. And you can cut stems from at least three of them to decorate your home for the holidays. And bees love them.

How would they look in your garden? 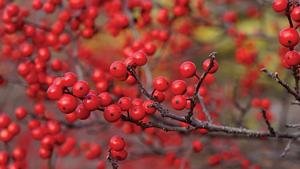 “This is my favorite species of holly, with the selection Winter Red topping the list, simply for the fact that the stems are absolutely stunning when covered in red berries,” Snyder said.

Winterberry is native from Canada south to Florida, west to Missouri, including in Ohio. It comes in small and large selections that range from two to 10 feet high when fully grown. It prefers damp sites but can tolerate drier ones. Birds such as bluebirds eat its berries. And its cut stems work great as natural, colorful holiday decorations.

“It holds up quite well in arrangements,” Snyder said. “And it dries well if left undisturbed in a vase.”

Find winterberry in many places in the arboretum’s theme gardens. 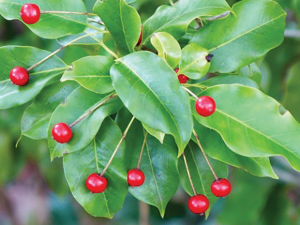 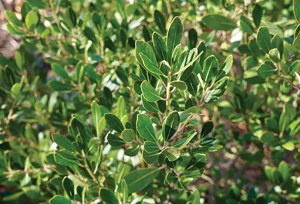 Inkberry, too, is native to much of eastern and central North America, but especially pine woods and sea coasts. Its evergreen leaves are dark-green, obovate – teardrop-shaped – and lacking in spines. Its berries, meanwhile, give it its name. They’re black. But white-berried types exist, too.

In the wild, inkberry grows as a dense, rounded shrub. In the landscape, it’s a common foundation planting. At the holidays, Snyder said, it’s used very little for decorating. 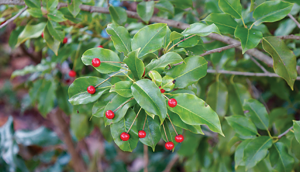 Longstalk holly has dark-green, evergreen, spineless leaves and an eventual height of nearly 30 feet. It makes a good specimen plant in the landscape, Snyder said. Best of all are its glossy red berries, which, as its name suggests, are borne on stalks, which are one to two inches in length.

The berries are “quite attractive and stand out from other Ilex species, although the fruit isn’t as heavy as other Ilex,” Snyder said. However, he added, “It’s not widely used in holiday decorating except by plant geeks like me.”

Hunt longstalk hollies in the arboretum’s original holly test planting, which is south of Pine Road and Green Drive, and around the John Streeter Garden Amphitheater. 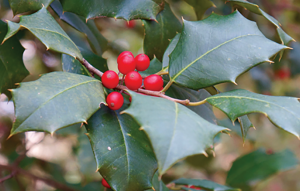 American holly is native from the Northeast south to Florida and west to Missouri and Texas. It grows in the wild in several counties in southern Ohio, Snyder said. It gets to be a small or medium tree of 40-50 feet high. But in the Buckeye State, a height of 20-30 feet is more likely, he said.

“It’s slow-growing in Ohio and becomes very graceful – a pyramidal habit – with age,” he said. “This plant, in my opinion, is very beautiful and well worth the wait to see a mature specimen in the landscape.

“When you come across a large specimen, there’s almost a respect for the plant. It’s a noble tree in its own right because it took decades to reach such heights.”

The leaves of American holly resemble those of English holly. They’re glossy green with sharp spines. The plant’s berries are red or yellow. It needs moist, well-drained, acidic soil and, ideally, protection from the winter wind so it doesn’t get burned and lose leaves.

American holly is a common substitute for English holly in holiday decorating. 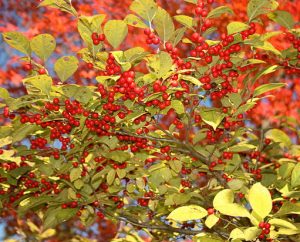 Native to China and Japan, finetooth holly resembles winterberry except for two traits: Its berries are smaller. And it’s semi-evergreen, not deciduous. It doesn’t drop all its leaves in Fall. Some of them hang on through Winter.

“The berries are bright glossy red and hold up well as a cut branch,” Snyder said. “Outdoors, the fruit persist much longer than those of winterberry, making it an excellent addition to the Winter landscape.”

But finetooth holly is “not widely used for holiday decorating simply for the fact that it retains some of its foliage; winterberry is the preferred species,” he said. “I’ve used it for decorating just to see how many species of Ilex I can use.” 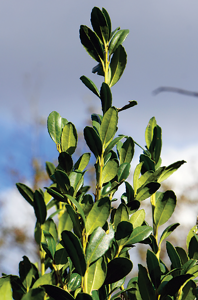 Japanese holly is an evergreen type with small, rounded, dark-green leaves and a very dense branching habit. Its berries are black and hard to see because of that branching habit. Its foliage and texture resemble those of boxwood. It can be used like boxwood in wreaths and the like.

“Japanese holly will grow in Ohio, but it’s not widely planted,” Snyder said. “We’ve lost several of them in the arboretum over the past couple of years due to different factors. But the selection Sky Pencil performs well here.” 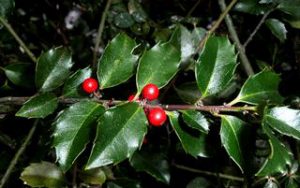 Glossy, beautiful, evergreen foliage in shades of green or bluish-green, plus glossy bright-red berries: That’s what you get with the Meserve hybrid hollies. They’re crosses between tsuru holly, or Ilex rugosa, and English holly. They’re widely grown in the landscape, almost to the point of overuse, Snyder said.

Meserve hollies will grow in sun or partial shade but prefer the latter. Harsh winters can scorch their leaves. “A couple of years ago, many of them were defoliated or killed to the ground during winter,” Snyder said.

They shine when used in decorating, he said, noting they’re often preferred over American holly because their leaves are glossier and their spines aren’t as sharp.

Find Meserve hollies, too, in the Jack Miller garden.

Come next Spring, if you want to plant hollies, remember that the entire Ilex genus is dioecious.

“That means that male and female flowers are borne on separate plants,” Snyder said. “So in order to get berries, you need a male pollinator.”

But not just any male pollinator. The male and female holly plants must belong to the same species, must be planted somewhat near each other, and must bloom at the same time. Garden center staff and other experts can tell you the right pairings and spacings.