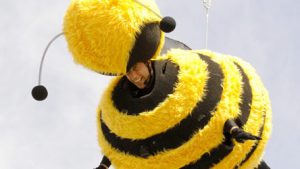 In 2007, culture as we knew it diverged into two categories. For the rest of recorded history, there would be the time Before Bee Movie (“BBM”) and the time After Bee Movie.

It’s hard to believe we’ve already marked 15 years to the day—November 2, 2007—when Jerry Seinfeld and DreamWorks Animation debuted their magnum opus. A decade and a half ago, Renée Zellweger looked at a script in which she’d play a woman falling in love with Jerry Seinfeld as a bee and said, “Sure, why not!” It’s the bizarro cultural artifact that birthed a thousand memes almost a decade after its release, a miraculous black-and-yellow hallucination.

And speaking of hallucinations, Bee Movie is also the production that gave us Jerry Seinfeld zip-lining off a hotel roof in a bulbous bee costume—a late-2000s pop-culture moment seared into my memory with the same intensity most reserve for those photos of Paris Hilton, Lindsay Lohan and Britney Spears partying together in that car.

The medium is the message, and no image better encapsulates the true meaning of Bee Movie than Jerry Seinfeld careening off a hotel roof, held up by nothing but a wire and a dream. As busy as we all might bee (!) in the year of our lord, 2022, it’s important we all take a time to reflect—bee-flect?!—on the gift that this movie’s absurd promotional cycle be(e)stowed upon us all. (This is, after all, the month in which those of us in the U.S. are supposed to express our gratitude.)

Key to the success of the Bee Movie costume gambit was the suit itself. This is not a fluffy sack you could pick up at your local Target, or even Spirit Halloween. This thing is big. This thing is round. This thing comes with a headdress the size of Jupiter and two protruding pipe-cleaner antennae that never stop bobbing up and down. The mesh wings are too small for that big bee body, which conjures the image of a flailing flightless bird as Seinfeld swings to and fro from his wire. And you can’t miss those shiny black clown boots, Doc Martens by way of Big Comfy Couch.

One imagines Seinfeld might not have been wild about the idea, which only makes it funnier. As Seinfeld quipped at the time, “You know, one thing I hate is any kind of movie promotion that smacks of desperation in any way.”

Then again, the comedian was apparently game to slip into that suit and tights more than once. He also wore it in a promotional trailer for the film, in which he tries to make a live-action Bee Movie in costume before a bewildered Steven Spielberg asks, “Why don’t you just make it a cartoon?”

According to Seinfeld, we have Spielberg to thank for Bee Movie’s existence; apparently, he blurted it out during his first dinner with the famed director.

“I’m Jewish,” Seinfeld told Oprah Winfrey during the film’s initial release. “I grew up on Long Island. [Having dinner with Spielberg] is like having a second bar mitzvah.” When a lull came in the conversation, Seinfeld shared his culture-shifting idea: “I had this thought that it would be funny to do a movie about bees called ‘bee movie,’” he said. “That was it—it wasn’t, ‘I want to make this movie.’ It was nothing.”

But the man who gave us E.T. apparently believed otherwise. Seinfeld recalled him saying, “That’s a movie. We have to make that movie.” (Emphasis mine, based on imagination.)

And so, it was time for Seinfeld to figure out what his film would actually be about—and how these bees would live. Could they walk places? Would they own cars? Would they one day become a meme thanks to YouTube videos that speed up every time someone in the movie says the word “bee”? All of this would soon be figured out. And the rest, as they say, is history. (Well, hivestory.)

In any case, feast your eyes on Jerry Seinfeld zip-lining over the French Croisette while dressed as a bee. It’s called history:

We are here to share current happenings in the bee industry. Bee Culture gathers and shares articles published by outside sources. For more information about this specific article, please visit the original publish source: ‘Bee Movie’ Just Turned 15—and So Did Jerry Seinfeld’s Cannes Bee Suit (yahoo.com)