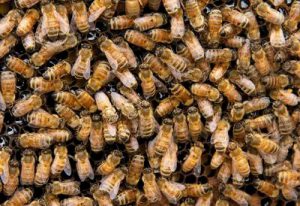 Backyard beekeepers — those keeping up to 50 colonies — averaged nearly 40% losses in the last 12 years, compared to commercial beekeepers, who averaged 21% losses, according to the Pacific Northwest Honey Bee Survey.

“They are not as attentive, not as aggressive in mite control, and so their level of losses is higher,” said Dewey Caron, leader of the survey and an emeritus professor of apiculture and entomology at the University of Delaware. He’s based in Portland.

Varroa mites are the top risk to healthy bees.  The mites themselves are not the problem, but they enhance and change bee virus populations, which leads to viral epidemics and rapid losses of colonies in the fall and winter months, Caron said.

“As you get more investment, if you’re more than a one or two-colony beekeeper, you start being more like a commercial beekeeper, doing those proactive things to avoid the loss, rather than being too late and doing too little,” Caron said.

Those who have been beekeeping for more than 10 years have slightly less loss than those with fewer years of experience, but not as dramatically as the difference in colony numbers, Caron said.

“It’s your level of being proactive and having the right information on how to do varroa control,” he said.

Beekeepers should frequently sample colonies for mite numbers, be aware of the tools available and use them in a timely manner, Caron said. A higher number of mites per 100 bees carries higher risk.

Varroa mite populations vary each year, with some losses heavier than others, Caron said. For backyard beekeepers, losses have been at 48% three different times in the last 12 years. Commercial beekeepers also saw a spike in losses those years, but not so heavily.

“Looking at 13 years of survey data, it goes up, then it goes down,” he said. “We don’t have any direct correlations of why that might be the case, but it is consistent.”

The Honey Bee Health Coalition recently released the 8th edition of its varroa mite management guide. Caron called the revisions a “major reworking,” with updates on available chemicals and use recommendations.

Reaching backyard beekeepers can be challenging, Caron said. They might rely on the Internet for their information, instead of attending meetings or using a mentor. Oregon and Washington offer Master Beekeeper programs.

Each state has between 70 to 100 commercial beekeepers, those managing 500-plus colonies, with several families managing 14,000 to 20,000 colonies.

Oregon and Washington both have roughly 1,000 to 1,500 small-scale beekeepers managing less than five colonies, while Idaho has roughly 800 smaller beekeepers, primarily along the Snake River in the southern part of the state.