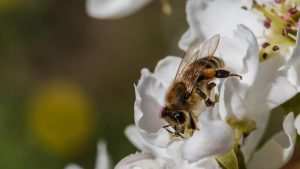 The almond industry is frantically working with state governments to move thousands of beehives around the country, to avoid a disastrous half-a-billion-dollar crop failure.
The nut is 100 per cent reliant on European honey bees for pollinations, but a varroa mite incursion in NSW has almost half of the nation’s commercial beehives on lockdown, with no hives to be moved around or through the state.
Almonds are grown all along the Murray and Murrumbidgee rivers, with plantations from Griffith in NSW to Adelaide in South Australia and need 300,000 hives throughout August to pollinate almost 60,000 hectares of almonds.
Almond Board of Australia chief executive Tim Jackson said 150,000 of those hives come from NSW and need to be in place before the trees start to blossom.
“We’ve circled July 24 as D-Day, that’s the latest date we can move the bees to get them ready to go when the blossom occurs,” Mr Jackson said.
“The challenge right now is if an exception isn’t made for almond pollination, up to $500 million of almonds won’t be pollinated. Once the flower’s gone, the opportunity to produce a crop is gone.”
The almond industry is working closely with the NSW government to develop a permit system that will allow some beehives to make the annual pilgrimage, re-establishing a multi-state working group that was originally formed to coordinate cross-border pollination during COVID-19 border closures.
“There’s a lot of overlap [with COVID-19], we’re essentially trying to address the same issue, but we’re adding a biosecurity element,” Mr Jackson said.
“We’ve already got existing relationships with governments, who trust that we’re going to do the right thing because we’ve been working together for the past two years.”
The details are still being hashed out, but Mr Jackson said apiarists would have to know the health of their hives before moving them and notify state authorities of their locations for traceability purposes.
The Victorian, South Australian and Queensland state governments all confirmed they were working closely with almond growers to prioritise hive movements for pollination services.
Almonds are not the only crop that could be gravely affected by a prolonged lockdown of NSW’s beehives – 35 industries rely on honey bees for pollination, including apples, stone fruit, cherries, blueberries and melons.
If the almond pollination permit is successful and the NSW standstill order continues, other industries will adopt the same model.
“Almonds are just the first cab off the rank, everything flows on after in the pollination season,” Victorian Farmers Federation beekeeping branch head Peter McDonald said.
“There’s canola seed in September, followed by stone fruits, pears and cherries.
“Blueberries are starting around now in northern NSW and Queensland, macadamias start in and around August.”
Australia is the last continent to be free of Varroa mite. In response to a potential outbreak, the avocado industry recently completed research into alternative pollinators.
“We need to manage the risk,” Avocados Australia chief executive John Tyas said.
“Growers often see a wide range of insects in their orchards during flowering, but we didn’t know if they were actually effectively pollinators. Now we’ve actually got the data.
“In some areas, hoverflies made up the vast majority of pollinators and in others the common house fly made up a significant proportion.”