A bee colony has to have many worker bees to get all the tasks done. So too does an organization, as does a bee journal like Bee Culture. 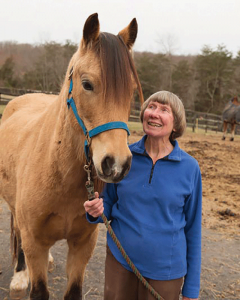 Ann Harman is the archetypical ‘worker bee,’ best described as the ‘energizer bee.’

Ann has been a tireless worker on behalf of the Eastern Apiculture Society along with Virginia and Maryland bee groups. She is a Master Beekeeper, getting certified  in the very first group to earn the EAS MB certificate (1981 at Rutgers). The same year she gave an EAS workshop on Honey cookery. One year earlier Ann gave her first talk to EAS (UVM, 1980) on studies testing bee venom on arthritic dog and horses, after bees, her other favorite animals.

In 1982 Ann was again on the EAS Short Course and conference programs. She also began to help proctor, then grade, the EAS MB Exam.  In addition she was a Honey Show judge. During subsequent conferences, her presentations varied from topics as diverse as batik, chemistry of honey, honey cookery, judging honey quality and apitherapy. She has also continued her honey show judging and once again this year at the EAS meeting at the University of Delaware July 31-August 4, she will be assisting and exam grading for the EAS MB examinations.

Ann dates her beekeeping to 1978. We sent her on a “swarm” call from the University of Maryland and told her to keep it – it was hers. She attended her first short course that year at the University of Maryland; later she was part of the instruction. At that time she was Head of Science Department, Georgetown Day School in Washington, DC. Her science specialty was Chemistry and before teaching was a Research Physical Chemist, National Institute for Science & Technology in Gaithersburg, Maryland.  She would eventually be assistant research apiculturist for me and then as our honey bee Extension Specialist in Maryland.

In 1987 Ann was elected as EAS Director from Maryland. The next year she took on the EAS Board liaison to the Awards Committee – continuing in that function for 15 years. She was on our Awards selection committee and when EAS added the Divelbiss award in 1988, Ann took on the annual task of finding and evaluating candidates for the Divelbiss award. We had the chance to surprise Ann with the award in 2010.

Ann Harman has been there and done that!

As Maryland EAS Director, Ann had taken on the task of standardizing the EAS Honey Show and judging criteria (each state was responsible for the EAS honey show so rules sometimes varied from one year to the next to the consternation of entrants). In this role, she wrote virtually every state that had a honey show to obtain and compare their show rules and judging score system. She became EAS Honey Show Chairman the following year (1991), continuing over 10 subsequent shows in that role.

At about the same time she helped ABF rewrite their show rules and judging criteria. She was an ABF Honey Show judge for several years and an alternative to the National Honey Board (2004-2008). Over the years she has judged numerous honey shows in New Jersey, Delaware, and Pennsylvania and has continued as judge for many of the annual EAS honey shows. She is a Welsh Certified Honey Judge.

In 1992 I asked Ann to become vice-chair to the EAS, a new position created that year. Ann filled the 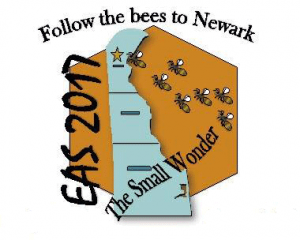 Vice-Chair with excellence. While away on sabbatical in Panama (1995 Ohio meeting), she was the acting Board chair. She would continue as Vice Board chair until 2008, serving three different Board Chairmen.

In addition to EAS, Ann is a well-known and popular presenter on the “bee lecture” circuit. She gives over two dozen bee talks annually to her home club and other VA clubs, plus numerous programs in nearby state and local clubs. She is often on regional and national bee meeting agendas. She teaches a local bee school and is a mentor of one or more ‘newbees’ each year (her neighboring farmer is a current mentee). She has been newsletter editor for her local association, the North Piedmont beekeepers, for 20 years.

As author of a monthly Bee Culture column, Ann is a well-recognized voice of beekeeping. Her first Bee Culture article was in May 1980 (twine suitability as smoker fuel). When Kim Flottum became editor she became a monthly columnist (honey cookery). Although she will occasionally still write about this topic, her columns now cover a wide range of topics.  She is a very careful proofreader and has assisted with many of the popular bee books such as Beekeepers Handbook, my Honey Bee Biology and Beekeeping and as Co-editor of ABC & XYZ of Beekeeping.

ln addition to Bee Culture, she is frequent contributor to Beekeepers Quarterly and Bee Craft (both from England) and with me was co-editor of digital  Bee Craft America (no longer offered).

We are blessed to have such an energetic worker bee for EAS and local and regional bee groups. As the saying goes, Ann Harman has been there and done that. Be sure to come up to Ann and greet her at EAS 2017 in Delaware July 31-August 4. She will be at the Bee Craft vendor booth, giving MB exams or look for her in the honey show area.

Ann Harman and Dewey Caron are both great friends to Bee Culture. We’ll all be at EAS this year in Delaware. Hope to see a bunch of you there.