We’ve had a busy, but fun and exciting late Spring and early Summer. I have lots to talk about this month, so I’ll hit the highlights. 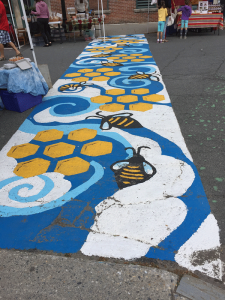 The crosswalk leading to the Farmer’s Market and the church in Greenfield.

If you are a fan of the Kim and Jim show webinars that Bee Culture has been offering, then you know that in May they tried to do something new – move it outdoors. I’m pretty sure we got all of the bugs worked out here in Medina and then it rained. While we were outside one day with our IT guy, Johnny, sitting on the steps of the Root family homestead, we witnessed something not uncommon, but remarkable. As Johnny and Kim were working with all of the iPads and iPhones I noticed a great amount of bees in the air. As I watched closer I realized what was happening. One of the Root hives was getting ready to swarm.

Beekeepers look at swarms differently – some feel it’s just what bees are meant too do and don’t get to upset about it. Others, want to catch that swarm right away. It took about 10-15 minutes of circling in the air and the swarm landed high in a tree. The maintenance guys here at Root were ready to get a ladder and send our resident beekeeper up in the tree. We vetoed that activity and assured him that the swarm would be gone by the next day. It was.

If you’ve never gotten to see this I hope someday you do. Regardless of how you feel about swarms it is a site to see. 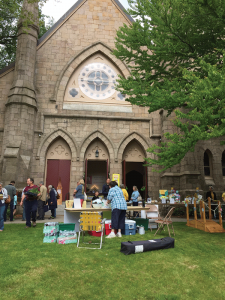 Getting set up for the 7th Annual Bee Fest at the Second Congregational Church in Greenfield, MA.

A couple of weeks ago we had a situation with our older chickens that we hadn’t witnessed before. I went out one night to close them in for the night and two of them were just beating the heck out of a third girl. So I scooped her up and isolated her for the night. She wasn’t gravely wounded and didn’t seem sick. We kept her away from the others for a couple of days and then tried to reintroduce her. The same two chickens came after her chasing her right back into the coop into the corner. None of the others, just those two. Like I said she didn’t seem to be sick or wounded.

If you know chickens, you know they have zero tolerance for the sick and wounded. She didn’t appear to be either of those and the fact that the whole flock wasn’t going after her was odd. So we tried putting her in with the young girls that are not quite grown. She didn’t go after them, but if they approached her she started pecking. Okay so what to do with this chicken – I know some of you are thinking just get rid of her. And that option was starting to look like the only good one. However our neighbor has chickens and Kim happened to bump into her out in the yard and asked if we could try relocating our bird to her flock. Well, they took her in and she has been just fine ever since. Very strange. 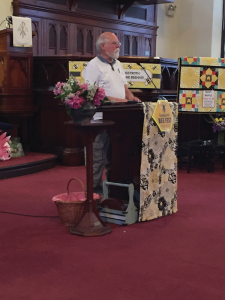 The first weekend in June Kim and I were in Greenfield, MA. This is one of the homes of L.L. Langstroth. If you’re new to beekeeping you might not be real familiar with that name. I encourage you to do some reading. L.L. Langstroth is considered the father of American Beekeeping. He was a teacher, a preacher and a beekeeper. He was born in Philadelphia and even lived in Ohio for a while. But a chunk of his life was spent in Greenfield.

The church is still very active with around 250 members and seems to do a lot of community service. The building is open everyday from noon until 2:00 p.m. just so folks can come in and rest, pray, meditate or just get out of the weather. It is a beautiful church and I have to believe L.L. would be pleased to know that there is still a flurry of activity going on there.

Airborne Honey has been owned and operated by the Bray family in South Canterbury for generations. It is one of the world’s most scientifically…