When honey bees walk across a surface, their feet often deposit an attractive, oily, colorless secretion that has a low volatility. This secretion has been shown to affect the behavior of other workers, thus is considered to be a pheromone. This chemical has been termed “footprint pheromone’ or “trail pheromone.” The secretion is believed to originate from the tarsal (Arnhart) glands. These glands are located in the 5th tarsomere of the fore-, mid- and hind-legs of adult honey bee queens, workers and drones. Their structural features are not caste or sex specific. The tarsal glands have the shape of a flattened sac within each of the last tarsal segments of each leg (Lensky et al. 1985). Each gland consists of a unicellular layer which surrounds and secretes into a sac-like cavity which forms the reservoir of the gland. The unicellular layer of epithelial cells contain an abundance of cellular organelles consistent with a secretory activity (Goodman 2003). The chemical is deposited by the terminal arolium between the tarsal claws as the bee walks about. In addition to the feet, it is deposited by the tip of the abdomen, which often trails over the surface as the bee walks (Caron and Connor 2013).

The cells of the tarsal gland differ from those of the Nasonov gland in that they do not have ducts to transport the secretory material either to the reservoir or to the exterior. The gland cells are bounded by cuticle and to enter the reservoir the secretion must cross this barrier (Goodman 2003). This type of gland cell is classified as class 1 (Noirot et al. 1974). It is not clear how the secretory material crosses the cuticle – does it diffuse through the cuticle or make use of a pore canal system? The means by which the secretion exits the tarsal gland cells and gets to the reservoir remains to be determined.

Honey bees show a variety of “footprint chemicals” which have been characterized by chromatographic techniques. Included are alkanes, alkenes, alcohols, organic acids, ethers, esters and aldehydes. Tarsal glands secrete 12 compounds specific to queens, 11 specific for workers and one specific to drones (Lensky et al. 1987). A further difference lies in their rate of secretion, the tarsal gland of the queen secreting at a much higher rate than that of the worker and the drone. The secretion of six-month-old queens is greater than two-year-old queens; the rate of secretion of the workers’ glands is 10-15 times less than that of the queen’s (Lensky et al. 1984). 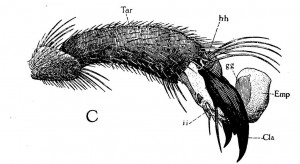 Lateral view of end of last tarsal joint of first foor (Tar) showing empodium in ordinary position when not in use.

Secretions with very different functions are deposited by the tarsi of both queens and workers (Blum 1992). In the worker, the pheromone appears to belong to those chemicals that assist the bee in orientation. Workers deposit a persistent trail pheromone at their hive entrance and the attractiveness of this secretion increases with the number of workers depositing it (Butler et al. 1970). It appears that bees also mark forage sites with the footprint pheromone, thus increasing their attractiveness to other foragers (Ferguson and Free 1979). Thus flowers and sites containing artificial pheromone lures are more attractive to other workers than similar resources that have not been marked with footprint pheromone. There is also some suggestion that footprint pheromone may help short-term marking of individual flowers whose nectar source has been depleted – helping to avoid unproductive visits (Free 1987). 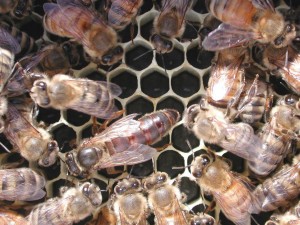 The queen leaves her special mark.

Butler et al. (1969) showed that crawling workers, apparently involuntarily, deposit a ‘footprint substance’ that attracts other workers and stimulates them to enter the hive. Homecoming honey bees are also attracted by an odor in the hive atmosphere which may be part of the ‘footprint substance.’ This footprint pheromone, which is certainly perceived olfactorily and possibly also chemotactically, is persistent but probably not colony specific. Glass entrance tunnels that have been marked with this trail pheromone are much preferred by homecoming bees to clean glass entrance tunnels. The attractiveness of an entrance tunnel increased with the number of workers that had previously used it up to about 400 workers, thereafter its attractiveness failed to increase further. The trail pheromone of workers from another colony was also attractive but slightly less so than that of workers from a bee’s own colony.

The floor and inside walls of the hive or nest and the combs themselves are also probably marked with trail pheromone. The accumulation of trail pheromone on comb may partially explain why old comb is more attractive than new (Free 1987). Butler (1967) found that bees he had trained to forage in a darkened arena produced an odor trail between their hive and the dish of sugar syrup.

It is well established that a glass dish on which bees have been foraging for sucrose syrup is more attractive to potential foragers than a clean dish, probably because of an attractive trail pheromone the foraging bees have left behind. Experiments that have demonstrated this involved training bees to collect sugar syrup from tubes or dishes placed on a circular table. The tubes or dishes with syrup were replaced by empty ones, provided with different odors and placed equidistant from the table center; the number of bees that landed on or touched each tube or dish was compared. The table was rotated continuously so the bees did not become conditioned to any particular position (Ribbands 1954; Butler et al. 1969; Ferguson and Free 1979).

Bees visiting a site, mark it with an attractive pheromone irrespective of whether they have foraged successfully there or not (Free 1987). Ribbands (1954) showed that it was only necessary for a bee to land briefly on a particular empty tube for it to prefer that tube subsequently, Free (1970) found that would-be foragers were attracted to the odor bees had left on a glass sheet covering model flowers from which they could not obtain food and Ferguson and Free (1979) demonstrated that dishes on which bees had landed and had not foraged became attractive to others.

It seems that foraging bees may also have a preference for trail odor deposited by bees of their own colony. Bees from two colonies were trained to two separate but adjacent dishes of dilute sucrose syrup; the dilute syrup in each dish was then replaced by concentrated syrup so that dancing and recruiting were encouraged. Newcomers that arrived were preferentially attracted to the dish visited by their nestmates (Kalmus and Ribbands 1952) and so deposition of a trail pheromone at a source of forage favors survival of their own colony. 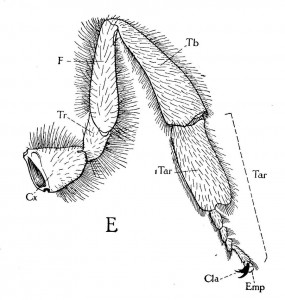 It has been suggested that the tarsal gland secretion of the queen plays a part in inhibiting the construction of queen cups and hence in inhibiting queen rearing and swarming. Experiments were conducted to determine the role of population density of queen-right colonies and that of the queen bee pheromonal secretions, on the induction and inhibition of swarming queen cup construction during swarming and non-swarming seasons. Construction of queen cups was induced experimentally in overcrowded queenright colonies, during Winter, which is a non-swarming season. This construction was induced by a high population density of workers: above a threshold of 2.3 workers/ml; there was a relationship between the number of cups constructed and the colony density. During the swarming season a relationship was established between the free volume of a hive (population density) and the number of queen cups constructed: 1.5 cups in a colony that occupied 80,960 ml, compared with 77 cups in a colony hived within a volume of 20,240 ml. Observations of the queen’s movements upon combs in colonies of high and normal population densities showed that in an overcrowded colony the queen bee was almost absent from the bottom edges of the comb, where queen swarming cups and cells are constructed. The glandular oily secretion from the queen’s tarsal glands is deposited by the foot-pads upon the comb surface. The rate of secretion by the queen’s tarsal glands was about 13 times higher than those of the workers. A bioassay based on increasing worker population densities for testing the inhibitory effects of the queen’s glandular extracts on the construction of queen cups was developed (Lensky and Slabezki 1981). 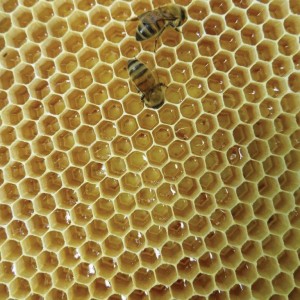 Footprint pheromone is everywhere in a hive.

The application of tarsal and mandibular glands’ secretion to comb bottom edges in overcrowded colonies (bioassay) caused the inhibition of queen cup construction. None of these two secretions affected construction of these cups when applied separately. They believe that due to colony overcrowding the queen bee is unable to deposit the non-volatile secretions from tarsal and mandibular glands along the comb edges and that the deficiency of the foot-print and mandibular pheromone triggers the construction of swarming cups along the non-inhibited areas (Lensky and Slabezki 1981).

Not all researchers agree that the tarsal glands are the site of production of the footprint pheromone (Winston 1987). Ferguson and Free (1979) reported that the odors of the head, thorax and abdomen are very active in inducing landing by workers searching for food. Thus, it is possible that this pheromone, while it is deposited by the feet, originates elsewhere on the body (Butler et al. 1969).