As an apiary inspector for North Carolina, Don Hopkins normally needs to be notified when you bring in bee packages from other states. I think he also likes to know where you are keeping your bees. Since our office is pretty close to Don’s front door, he can usually spot our brightly colored hives (or someone tells them where they are) before he gets a call from us. We call him in when we get our packages in the Spring, or when we need an official inspection to move our hives across borders, or just an opinion on general colony health. It was at one of these more recent inspections that I asked Don to be my interview for this year. He seemed slightly surprised, maybe a little wary (Bobby pointed out later that everyone should be wary when I want to ask them questions), but game for being interviewed. Although I’ve known Don for a good few years, there were a lot of things either I didn’t know, or were mentioned in passing that were interesting and made me want to ask more. Since Don is the chief apiary inspector for North Carolina, and I am a procrastinator occasionally, it was a little difficult getting the timing set up (maybe I waited a little too close to the deadline). Don came in to talk to me on his first day of the NC State Fair set-up on his way home, a little frazzled, but still totally rockin’ his ‘state. 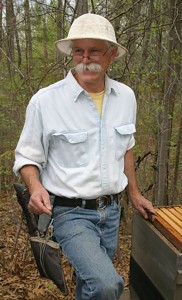 How long have you been working with bees?
I started working with bees around 10 years old, and I’m 67 now, so it must have been in the 60s. We had milk and bread delivered to the house every week, and sometimes the delivery man would sell us honey from his own bees. I started talking to him, and ended up with my own bees. My parents were pretty tolerant about that sort of thing, and I started selling my own honey. I became a junior member of the Morris County Beekeeper Association [in New Jersey]. After I went to college, I bought a house and decided that since I had a place of my own, I could keep bees again. I joined back up with the same bee club, and met the delivery man again. It turned out he only lived just down the road from my new house!

Tell me a little about your family. I know the other day you were talking about your sister being an amateur mycologist…
Well my sister actually moved to Saranac Lake in New York because she liked the mushrooms better there. She was recently in the area teaching a fabric dyeing class with mushrooms, then she came east to meet some friends and have supper with us, then she went back to Black Mountain for a mycology seminar.

My wife Susan is currently down in Pendleton, South Carolina for a horsemanship clinic. Her main focus is the discipline of dressage. She works at a farm in Walkertown raising Hanoverians from colts to get them ready for sale once they’re older.
I have three kids, two of which live in the Boston area. The third was in nursing school and met me when Eastern Apiculture Society was in Burlington, Vermont [back in 2012]. She liked the area so much while she was there that she took a job at a hospital in Burlington when she graduated. It was a pretty neat train of events.

When did you move down to NC?
I moved to NC in 1988 and started working with the NCDA in 1989 with the tracheal mite quarantine. Logan Williams, who was the head of the department at the time, hired me on as a temporary position because they needed the help.

So how long have you been working as an apiary inspector?
I stayed in the temp position for a couple years before it became a permanent position. I took over as the chief apiary inspector in either 1993 or 1994. I knew that being an apiary inspector was a job that I wanted to do, but taking on the supervisory role opened more doors for opportunities like national meeting attendance in addition to still being able to do the inspection part that attracted me to the job in the first place.

What do you have to do to become a state inspector?
The most important thing is beekeeping experience and an interest in bees. We have a broad range of educational experience with our inspectors here, from college to post-graduate work. It’s still not an easy job to get because the positions don’t open up very often. It’s not a high paying job but it’s really rewarding and it says a lot that most inspectors keep their job until retirement instead of trying to advance in other directions or change to a different position within the NCDA. You can also pick up a lot of valuable experience. It’s personally helped me with my communication skills, which is something I hadn’t even considered when I took the job.

As an apiary inspector, what are the biggest parts of the job?
Well, one of the biggest attractions to being an inspector is that no day is typical. There are seasonal changes more than anything, but usually no two days are the same. We do have a lot of preparation for the State Fair and meetings, and of course hive inspections. Spring is our busiest season, with package inspections and new beekeepers needing assistance and preparation for hive shipments to California – [JL interrupt: how many commercial apiaries do we have in North Carolina that go to California?] Oh, well we have about five, with two of the guys going to California every year, and three or so that waver between going and not going. North Carolina is predominantly a hobby beekeeper state, there’s no denying that.

What’s the biggest part of getting ready for the State Fair?
Getting the exhibits ready for everyone is the biggest time consumer. The exhibits are made on a county-by-county basis for how much space we get. We never know how many people may be coming in, but we don’t want to lose our space allotment. Like last year, we ended up with only five exhibits, but we received space for 10. We don’t want to get less next year, so we start calling the exhibitors in June or July to ask them about what space they might need. We also have all inspectors on duty during the fair. It’s a 10 day event and we have about 120 positions to be filled by inspectors and volunteers from the area. We usually run four hour shifts with three shifts a day. Normally our volunteers are from Wake, Chatham, and Orange, but we do get a lot of other people helping out. It should be better this year because they’ve opened up parking at PNC Arena with a shuttle.

Our biggest day for me is after the judging, once everything is done on our end for preparation. It’s a huge sense of accomplishment to finish judging and have the exhibitions ready to go. 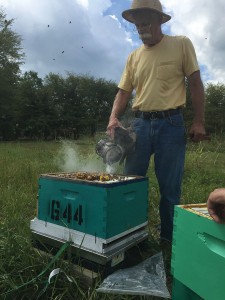 Don comes to do a health inspection on some of our colonies at work.

What is the most interesting part of being an inspector?
I like looking for different things in the inspections. You’ll always see something unusual, or something that has a question that isn’t answered, like that swarm at your site the other day with the exterior comb [JL insert here: we had a swarm leave and build comb hanging on a branch in a nearby tree). It’s the size of a basketball] and wondering what will happen to that colony later. It might die, or it might survive and you never know for sure. It’s always interesting to see things like high Varroa counts and how they affect a colony, but you also get the odd stories about the blue honey, or purple brood, and you don’t usually get a satisfactory answer. When you do though, you feel like you’ve achieved something. You also get to talk to a lot of guys who spend a lot of time in their hives and just their casual observations are things that you’ve never even thought about or realized.

What’s different in North Carolina inspections than other states?
Our state is a lot more regulatory than other states, but I think it’s been pretty reasonable regulation. We’ve had a good rapport with the NC beekeepers in the past and it’s helped us make better judgment calls about what is needed in our state.

What is the biggest pesticide issue you see with North Carolina bees?
Varroa. We’ve started taking Pat Jones [pesticide extension agent for NCDA] out with us and taking samples at the hives, but it seems like the majority of our pesticide kills are actually from Varroa infestations. It doesn’t seem like Occam’s Razor applies here and people will come up with the most obscure rationale for their colony death instead of doing a sugar shake or an IPM board. It’s also funny sometimes because I’m from New Jersey, and people are worried about overwintering their bees – and I want to know where this Winter is that they are so worried about?