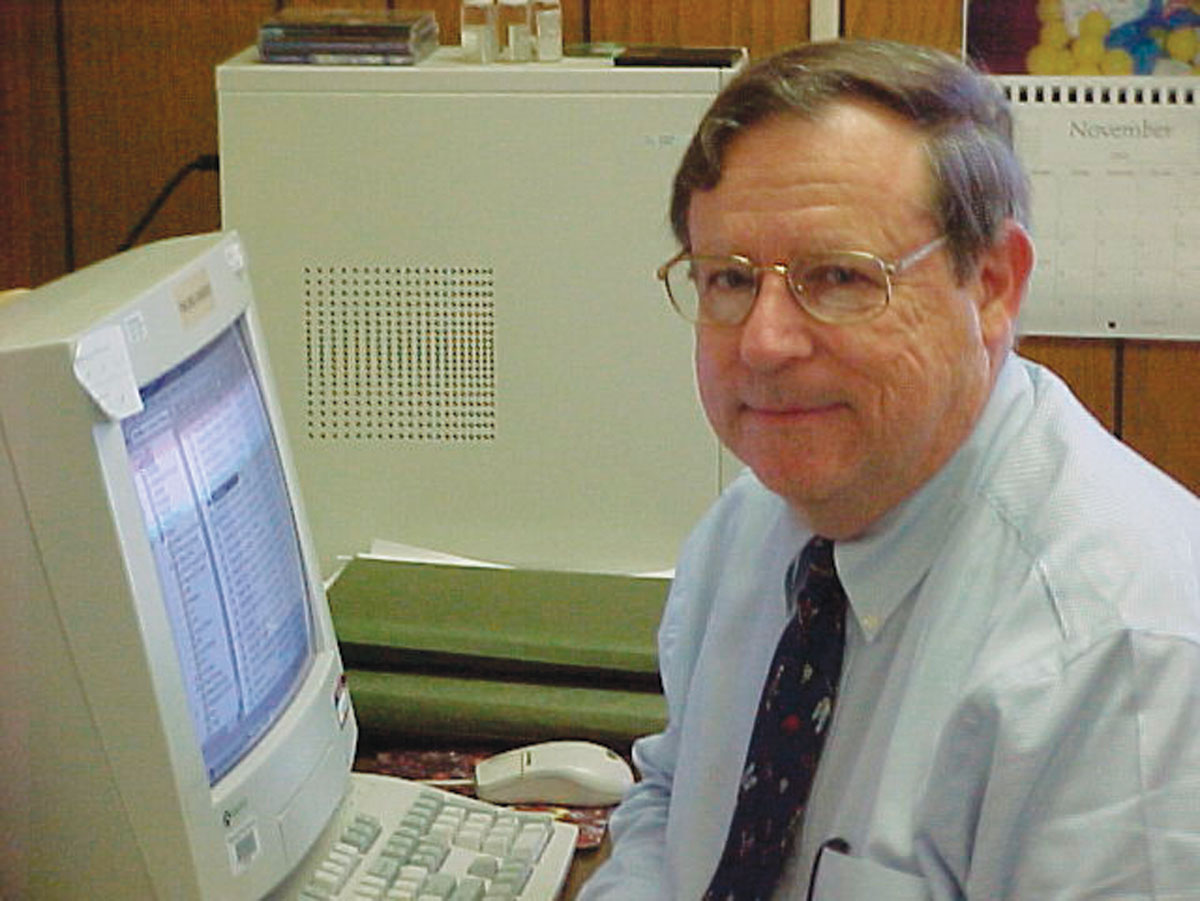 Although typically produced in very small quantities, hormones may cause profound changes in their target cells.

Endocrine glands produce hormones that work internally in the honey bee to control bodily functions. Hormones only affect the individual that produces them. They are often regarded as chemical messengers. Although typically produced in very small quantities, hormones may cause profound changes in their target cells. Their effect may be stimulatory or inhibitory. In some cases, a single hormone may have multiple targets and different effects in each target.

Larval honey bees have three important endocrine glands that are involved in their growth and development. The prothoracic gland is a very small leaf-like structure situated between the first two of the three thoracic segments. This gland produces a substance called ecdysone that controls molting in the larva and pupa; this gland is not present in the adult bee. 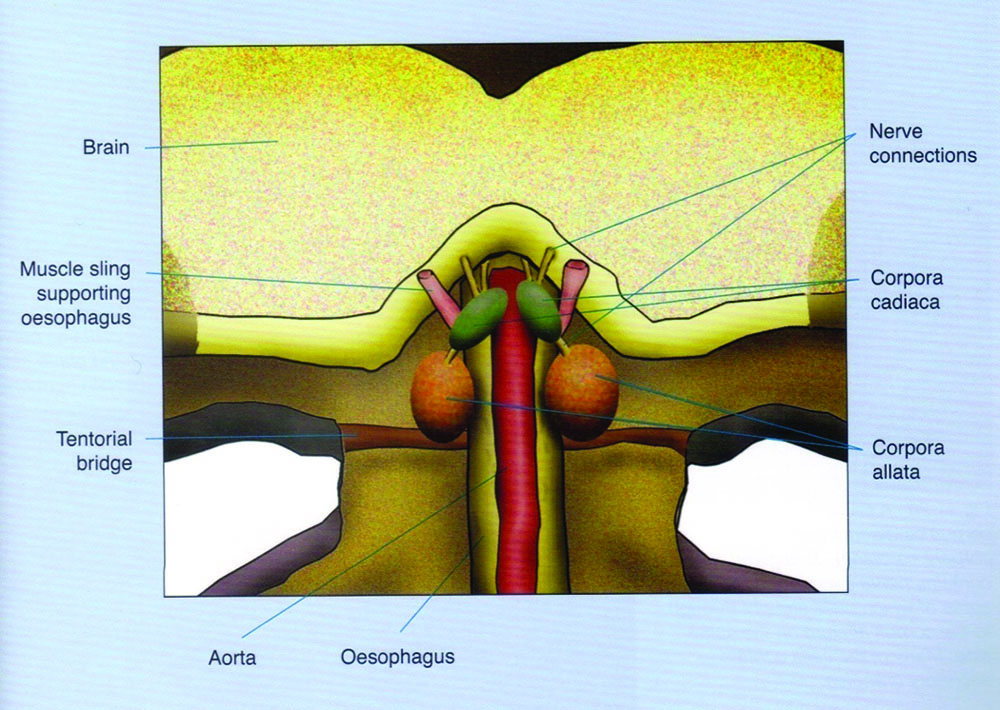 Figure 1. Diagram showing a slice through the head, seen from behind. In the small space behind the brain and in front of the connection to the neck are the main neurosecretory glands: corpora allata and corpora cardiaca. Stell (2012).

Molting or ecdysis is the process during which the insect casts off its exoskeleton and grows a new larger one to accommodate its increase in size brought about by feeding in the periods between molts. Ecdysis is therefore confined to the larval and pupal stages and does not occur during the adult stage where there is no growth (Morse and Hooper 1985). Developing bees undergo six molts during which the outer skeleton is shed; five of these take place during the larval stage and the last occurs when the bee emerges as an adult. The first four larval molts occur approximately once a day for workers and queens and allow the larva to grow rapidly by shedding the exoskeleton when it has become too small (Winston 1987).

Neurosecretory cells in the brain release brain hormone in response to both internal and external stimuli. Molting is initiated when brain hormone is passed down the nervous connections to the corpus cardiaca, where it is released into the hemolymph (blood) of the bee. This brain hormone causes the prothoracic gland of the larva to produce ecdysone (molting hormone), which initiates the changes in the epidermis and the whole process of molting. This hormone travels in the blood and ends up at the epidermal cells of the exoskeleton. Ecdysone is the message to begin process of molting (Caron and Connor 2013).

“Molting is initiated when brain hormone is passed down the nervous connections to the corpus cardiaca, where it is released into the hemolymph (blood) of the bee.”

At the same time as parts of the old cuticle are being digested, the new cuticle is being secreted by the epidermis. The two processes continue until only the old epicuticle and exocuticle (the very hard tanned parts) remain, and the new cuticle has reached its full depth (Morse and Hooper 1985). Juvenile hormone also travels in the blood to the epidermal cells of the exoskeleton. It suppresses the expression of adult characteristics (Caron and Connor 2013).

Understanding regulatory mechanisms that underlie the fluctuations in the hemolymph juvenile hormone titers is a major issue in understanding honey bee sociality. Such regulation can occur in two different ways in the corpora allata, via modulation of enzyme levels and enzyme activity in the biosynthetic steps of the juvenile hormone molecule, and via degradation and clearance of secreted JH in the hemolymph.

Juvenile hormone-precursor manipulation and pharmacological inhibition experiments have shown that the final steps in JH synthesis are critically regulated in the corpora allata (Rachinsky et al. 2000), with their activity being modulated by biogenic amines (Rachinsky and Feldlaufer 2000) and also by the insulin-signaling pathway (Corona et al. 2007).

“Understanding regulatory mechanisms that
underlie the fluctuations in the hemolymph juvenile hormone titers is a major issue in understanding honey bee socially.”

In adult workers, the corpora allata show growth periods, increasing in size particularly during the first days after emergence. Under queenright conditions nearly constant growth was measured within the house bees. In queenless workers the initial gland growth is attained much faster, although the corpora allata volume diminished about a week after emergence (Kaatz et al. 1992). Additional studies investigating volume changes of juvenile hormone-producing corpora allata suggest that queen pheromone may affect the endocrine system of the receiver (Gast 1967).

Juvenile hormone synthesis in adult worker honey bees was measured by an in vitro corpora allata bioassay. Adult queenless workers exhibit higher rates of juvenile hormone biosynthesis than queenright workers (Kaatz et al. 1992). Hormone synthesis was not correlated with the volume of the glands. Extract of queen mandibular glands, applied to a dummy, reduces juvenile hormone biosynthesis in caged queenless workers to the level of queenright workers. The same result was obtained with synthetic (E)-9-oxo-2-decenoic acid, the principal component of the queen mandibular gland secretion. This pheromonal primer effect may function as a key regulating element in maintaining eusocial colony homeostasis. The presence of brood does not affect the hormone production of the corpora allata.

“During larval development, the juvenile hormone titer reaches a peak in the third to fourth larval instar, then drops to low levels at the beginning of the fifth instar in both worker and queen castes.”

Effects of biogenic amines on the corpora allata of worker larvae were studied in late larval development (Rachinsky 1994). Under in vitro conditions, octopamine and serotonin caused a dose-dependent stimulation of juvenile hormone release and increased intraglandular contents of juvenile hormone and its precursor methyl farnesoate in prepupal glands.

Juvenile hormone has taken on the role of producing multiple effects on setting the physiological conditions for age-specific tasks in adult workers. In young workers, the hemolymph JH levels are low and these bees carry out tasks within the broodnest, primarily feeding the brood with secretions from their well-developed hypopharyngeal glands (Winston 1987). As the bees grow older, they switch to more hazardous tasks outside of the hive, foraging for nectar, pollen and water, their JH titers are typically increased (Huang et al. 1991).

Measurements of both juvenile hormone and ecdysteroid hemolymph titers were made from the same individuals to explore the possibility that there is also an interaction between these hormones in the regulation of adult honey bee behavior and physiology. Queens, egg-laying workers, and workers engaged in brood care (nurses) had low titers of juvenile hormone whereas foragers had significantly higher titers. In contrast, ecdysteroid titers were undetectably low in both nurses and foragers, higher in laying workers, and higher still in laying queens. Measurements of juvenile hormone titers are consistent with previous findings demonstrating that this hormone regulates worker age polyethism (division of labor) but does not play a typical role in reproduction, as in other insects. Comparison of juvenile hormone and edcysteroid titers suggests that ecdysteroids are not involved in the regulation of age polyethism but may play a role in the regulation of reproduction in honey bees (Robinson et al. 1991).

References
•Barchuk, A.R., M.M.G. Bitondi and Z.L.P. Simões 2002. Effects of juvenile hormone and ecdysone on the timing of vitellogenin appearance in hemolymph of queen and worker pupae of Apis mellifera. J. Insect Sci. 2:1-8.