The Varroa mite life cycle consists of two distinct phases: a phoretic phase during which the females stay on adult bees and feed on hemolymph (blood), and a reproductive phase taking place inside of capped bee brood cells.  During the phoretic stage, the mites frequently switch among adult bees.  The role of the phoretic stage is unclear but must have some physiological role for the mites, since the mites cannot increase their population and they experience higher mortality during this stage by falling from the hosts or being groomed off by other workers. Mites, however without a phoretic stage could reproduce up to eight cycles and the average number of offspring for the first five cycles would be four (De Ruijter 1987), both parameters are much higher than occurs naturally. However, no study has compared fitness of mites with phoretic stage to those without, to determine the contribution of nutrition, if any, obtained during the phoretic stage.

During the phoretic phase the mites clearly prefer nurse bees over foragers (Kraus 1993; Kuenen and Calderone 1997; Del Piccolo et al. 2010). However, all of these studies were conducted inside laboratories using either live or freshly frozen bees. For field studies, one study showed mite preference for six and 12 day old bees (Kraus et al. 1986) but it appeared that they used only one colony. After six hours of the test runs, about 60% of the tested mites were situated on nurses, 35% on pollen collectors and only 5% on young bees which had just been uncapped. Tests using dead bees killed by freezing resulted in 55% of the mites being found on nurses, 35% on pollen collectors and 10% on young bees. The relative infestation of bees of different ages within the hive resulted in a two to three fold higher infestation of young bees compared to older bees and about a 20 fold higher infestation compared to pollen collectors. Differences were also found in the positions of the mites on the bees.  During the tests of simultaneous choice, about 35% of the mites on pollen collectors were positioned between the thorax and abdomen and 12% under the abdominal sternites, whereas in nurses only 11% were between the thorax and abdomen and 26% were under the abdominal sternites.

Another study showed no difference for mite preference for six to 13 (nursing age), over 17-29 day old bees (foraging age), again using a single colony but with two cohorts of bees (Steiner 1993). Thus mite host preference inside colonies is inconclusive. In addition, in both studies the mite preference was studied by following the same cohort of bees as they aged, so environmental conditions were also changing, both internal and external to the single colony used.

When an infested adult bee emerges from its brood cell, the accompanying female mites (the original female mite(s) and the new adult females) leave the cell by phoresy (dispersal by clinging to another organism). Each mite may search out another adult worker or drone and attach herself to it or stay on the original host on which they hide and feed. With the chelicerae (mouthparts), she pierces the intersegmental membranes (or other soft parts) of the bee and feeds on its hemolymph for several days. This is the beginning of the phoretic phase. The time interval until the next brood cell invasion varies and is one of the determining factors for the rate of increase of the Varroa population. When this interval is short the rate of reproduction is effectively increased because more reproductive cycles are accomplished per unit time (De Jong 1997). Some mites may invade brood cells immediately. Boot et al. (1993) found in three different measurements, that 50% of the mites reentered brood cells within 2.0, 4.3 or 8.3 days. A longer time spent on adult bees before beginning a new reproductive cycle is correlated with a lower infestation rate in the colonies (Otten 1991).

Early studies that focused on the phoretic phase showed that it seemed to have no purpose for the parasite other than providing transport between reproduction sites (Boot et al. 1995). Therefore, it could be suppressed without having any visible impact on mite reproduction under natural conditions (De Ruijter 1987). 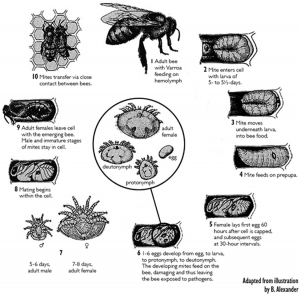 The significance of the mites phoretic stage, when mites feed on adult bees for a few days is not totally understood. In addition, it is not clear whether the preference of mites for nurse bees observed in the laboratory also happens inside natural colonies. Xie et al. (2016) tested whether mites prefer nurses over other bees when they are given simultaneously a choice of three types of bees (newly emerged bees, nurse bees, foragers) in field colonies, and whether feeding on nurses increases their fecundity or fitness when they later reproduce on worker pupae. They found that Varroa mites prefer nurses over both newly emerged bees and foragers in a colony setting.  They were also able to determine the mechanism behind this preference and show that this preference maximizes Varroa fitness.  However, due to the fact that each mite must find a second host (a pupa during the reproductive phase) to reproduce, the fitness benefit to the mites is not immediate but delayed.

Mite fecundity was significantly affected by the type of phoretic hosts that they had previously fed upon: mites that fed on nurses showed the highest number of female offspring, followed by those fed on foragers, then those on newly emerged bees. Mite fitness followed a similar pattern with mites that were hosted by nurses having significantly higher fitness than the mites on the other two types of bees, but mites feeding on foragers showed the same fitness as those on newly emerged bees. Infertility rates also differed significantly among the mites hosted by the three types of hosts, with mites fed upon nurses having the lowest infertility rate, followed by foragers, then newly emerged bees. Finally, when mites were hosted by phoretic hosts with known ages, there was a significant negative relationship between mite fecundity and age of phoretic hosts (Xie et al. 2016).

The duration of the phoretic period is dependent on the mite’s chances of being taken to a suitable cell by its host, which depends on the number of brood cells in relation to the number of adult bees (Boot et al. 1994).  Therefore, more brood cells and fewer bees increase the chance that a mite is carried close enough to a suitable cell to invade, thus shortening the phoretic period (Martin 2001). When brood is present, phoretic periods of between 4.5 to 11 days have been recorded. Mites artificially transferred from one cell to another, without passing any time on the adult bee, are still able to reproduce (De Ruijter 1987), although at a reduced rate when compared with mites that have spent some time on an adult bee (Beetsma and Zonneveld 1992).  However, under natural conditions mites need only a short time on the adult bee, less than one day for their subsequent reproductive ability to be unimpaired (Boot et al. 1995). The minimum necessary phoretic period is probably linked to maturation of the sperm within the female.

Piou et al. (2016) investigated if the type of bees on which Varroa stays during the phoretic phase and if the duration of this stay influenced the reproductive success of the mite and the damage caused to bees. They used an in vitro rearing method in the laboratory to assess egg laying rate and the presence and number of fully molted daughters. The expression level of two Varroa vitellogenin genes (VdVg1 and VdVg2), known to vary throughout reproduction, was also quantified. Results showed that the status of the bees or time spent during the phoretic phase impacts neither reproduction parameters nor the Varroa vitellogenin genes levels of expression. They correlated these parameters to the gene expression and demonstrated that daughters expressed the vitellogenin genes at lower levels than their mother.  Regarding the damage to bees, the data indicated that a longer stay on adult bees during the phoretic phase resulted in more frequent physical deformity in newborn bees. They also showed that those mites carry more viral loads of the Deformed Wing Virus and hence trigger more frequently overt infections.

Varroa mite egg cell development was studied by sampling mites from adult worker bees (phoretic phase) and from larvae before and after cell capping (reproductive phase) in order to determine the course and duration of the previtellogenic oocyte growth and subsequent embryogenesis (Steiner 1991). Mites removed from adult bees, in particular from nurse bees, had only previtellogenic oocytes in the ovary. Apparently vitellogenesis is not possible during the phoretic phase. Females sampled from still unsealed or newly capped worker brood cells likewise carried only previtellogenic oocytes, one of which often was found to be somewhat enlarged. After consumption of the larval food by the bee and subsequent freeing of the female mite, active parasitization by sucking hemolymph from late feeding, spinning, or prepupal stages began. This evidently stimulated vitellogenesis and subsequently rapid growth of the first oocyte to develop. Vitellogenesis was usually initiated ≈ 10-15 hours after cell capping and lasted ≈ 15-20 hours. The fully grown egg was ovulated into the oviduct and embryogenesis then began.

Mating of Varroa mites takes place inside the sealed honey bee brood cell.  During copulation, male mites transfer the spermatozoa into the genital openings of the females. Before the fertilization of female germ cells, the transferred spermatozoa have to pass through a final maturation process inside the genital tract of the female, the so-called capacitation. Häußermann et al. (2016) described for the first time the morphological changes and chronological sequence of spermatozoa during the process of capacitation within a female mite. They defined seven distinct stages of spermatozoa during the process of capacitation and have shown that it takes about five days from mating to the occurrence of spermatozoa ready for fertilization.  This might explain the results of an additional experiment where they showed that freshly mated daughter mites need a phoretic phase on bees before their first reproduction cycle. The transfer of non-capacitated spermatozoa from male mites and the resulting long capacitation period within the female mites seems to be a consequence of an adaptive pressure for the male mites to inseminate several daughter mites within the short time span inside the sealed honey bee brood cell.

Phoretic behavior or phoresy is also involved in mite dispersal. Female mites “hitch a ride” to other hives through the aid of the bees during swarming, drifting and robbing. Only the adult female mites disperse between colonies aided by the behavior of adult bees (Martin 2001). Infested colonies weakened by the activities of the mite are prone to robbing by other stronger colonies. Mites can be transferred into the robbing colony via the robber bees picking up the mites or infested robbed bees which desert their hive and return with the robber bees. Bees have long been known to drift from hive to hive, especially the drones which may visit many hives during their lifetime and appear to be excellent dispersal agents for the mite. When any infested colony swarms, both halves of the colony will contain a proportion of the mite population. Dispersal rates appear to be linked to a combination of mite buildup and changes in bee behavior, with peak dispersal occurring in the Fall in northern temperate regions. This corresponds with the peak in mite numbers and peak in robbing activity due to the lack of nectar flow. Since at this time there is little brood production, the majority of mites will be on adult bees.

De Ruijter, A. 1987. Reproduction of Varroa jacobsoni during successive brood cycles of the honeybee. Apidologie 18: 321-326.

Häußermann, C.K., B. Ziegelmann and P. Rosenkranz 2016.  Spermatozoa capacitation in female Varroa destructor and its influence on the timing and success of female reproduction.  Exp. Appl. Acarol.  69: 371-387.

Otten, C. 1991. Factors and effects of a different distribution of Varroa jacobsoni between adult bees and bee brood. Apidologie  22: 465-467.

Steiner, J. 1991. Oogenesis and embryogenesis in Varroa jacobsoni during the first gonocycle. Apidologie 22: 460-462.