Queen pheromone is complex and is produced from multiple glands.

Honey bee queens produce a sophisticated array of chemical signals (pheromones) that influence both the behavior and physiology of their nest mates (Beggs et al. 2007). This pheromone blend is complex and is produced from multiple glands including mandibular glands, tergal glands and the Dufour’s gland (Grozinger 2015). In the colony, division of labor and productivity are carefully regulated by the wide array of glandular pheromones produced by the queen (Kocher and Grozinger 2011; Le Conte and Hefetz 2008; Slessor et al. 2005). These pheromones regulate many aspects of colony organization.

Queens produce pheromones that function in both releaser and primer roles such as attracting a retinue of workers around her, attracting drones on mating flights, preventing workers from reproducing at the individual (worker egg-laying) and colony (swarming) level, and regulating several other aspects of colony functioning. 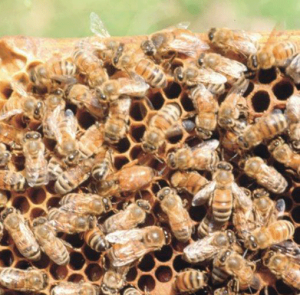 Kocher et al. (2009) investigated the role of mating and reproductive state on queen pheromone production and worker responses. Virgin queens, naturally mated queens, and queens instrumentally inseminated with either semen or saline were collected two days after mating or insemination. Naturally mated queens had the most activated ovaries and the most distinct chemical profile in their mandibular glands. Instrumentally inseminated queens were intermediate between virgins and naturally mated queens for both ovary activation and chemical profiles. There were no significant differences between semen and saline-inseminated queens. Workers were preferentially attracted to the mandibular gland extracts from queens with significantly more activated ovaries. These studies suggest that the queen pheromone blend is modulated by the reproductive status of the queens, and workers can detect these subtle differences and are more responsive to queens with higher reproductive potential.  Furthermore, it appears as if insemination substance does not strongly affect physiological characteristics of honey bee queens two days after insemination, suggesting that the insemination process or volume is responsible for stimulating these early postmating changes in honey bee queens.

Niño et al. (2013) examined the long-term impact of different factors involved during queen insemination on the chemical composition of the mandibular and Dufour’s glands, two of the major sources of queen pheromone.  Their results demonstrate that carbon dioxide (an anesthetic used in instrumental insemination), physical manipulation of genital tract (presumably mimicking the act of copulation), insemination substance (saline vs. semen), and insemination volume (1 vs. 8 ml) all have long-term effects on mandibular gland chemical profiles.  In contrast, Dufour’s gland chemical profiles were changed only upon insemination and were not influenced by exposure to carbon dioxide, manipulation, insemination substance or volume. These results suggest that the chemical contents of these two glands are regulated by different neuro-physiological mechanisms. Furthermore, workers responded differently to the different mandibular gland extracts in a choice assay.  Although these studies must be validated in naturally mated queens of varying mating quality, their results suggest that while the chemical composition of Dufour’s gland is associated with mating status, that of the mandibular glands is associated with both mating status and insemination success. Thus the queen appears to be signaling both status and reproductive quality to the workers, which may impact worker behavior and physiology as well as social organization and productivity of the colony. 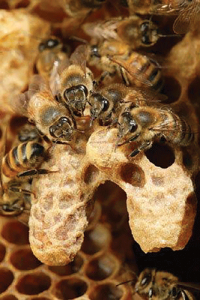 Honey bee workers develop from fertilized eggs, but those reared in a queenless colony develop into ‘rebel’ workers, which are more queen-like than typical workers. Rebels develop after an old queen leaves with a swarm and before a new queen hatches. Woyciechowski et al. (2016) hypothesized that larval food lacking queen mandibular pheromones trigger the rebel phenotype. Larvae reared under queenright or queenless conditions were additionally fed with water or a drop of macerated queen mandibular glands. After following development of the bees and subjecting them to dissection, they found that those reared with a queen or fed the macerated glands under queenless conditions developed into typical workers. Only those workers reared without a queen and without macerated glands added to their food developed into rebels; these rebels had more ovarioles, smaller hypopharyngeal glands, and larger mandibular and Dufour’s glands than did typical workers. This is the first evidence that larval perception of the presence or absence of queen pheromones causes an alternative developmental strategy. 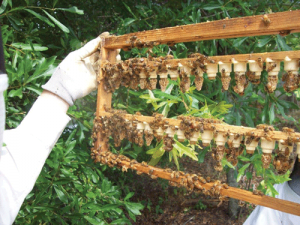 Queen rearing is suppressed in honey bees by pheromones, particularly the queen’s mandibular gland pheromone. Pettis et al. (1995b) compared this pheromonally-based inhibition between temperate and tropically-evolved honey bees. Colonies of European and Africanized bees were exposed to synthetic queen mandibular gland pheromone (QMP) for ten days following removal of resident queens, and their queen rearing responses were examined. Queen rearing was suppressed similarly in both European and Africanized honey bees with the addition of synthetic QMP, indicating that QMP acts on workers of both races in a comparable fashion. QMP completely suppressed queen cell production for two days, but by day six, cells containing queen larvae were present in all treated colonies, indicating that other signals play a role in the suppression of queen rearing. In queenless control colonies not treated with QMP, Africanized bees reared 30% fewer queens than Europeans, possibly due to racial differences in response to feedback from developing queens and/or their cells. Queens development rate was faster in Africanized colonies, or they selected older larvae to initiate cells, as only 1% of queen cells were unsealed after 10 days compared with 12% unsealed cells in European colonies (Pettis et al. 1995b).

Melathopoulos, A., M. Winston, J. Pettis and T. Pankiw 1996.  Effect of queen mandibular pheromone on initiation and maintenance of queen cells in the honey bee (Apis mellifera L.) Can. Entomol. 128: 263-272.

By: Ed Colby Shortcuts. I’d never seen bees just pour out of a hive unless they were swarming. But on a warm late April…