The often heard refrain that Varroa is the primary cause of colony losses associated with CCD is simply not supported by the evidence.

Harm to Birds and other wild pollinators –

The science is in.

Regular readers know that I have always had concerns about pesticides and honey bees, however, I never really knew just how bad the pesticide situation was when it came to our pollinators until I served on the Vermont Pollinator Protection Committee. Here in part II of my series on the impacts that neonicotinoid pesticides are having on pollinators, we explore the effects on wild pollinators.

A 2015 article in the journal Environmental Science and Pollution Research reported on a worldwide integrated assessment of the impact of systemic pesticides on biodiversity and ecosystems that looked at food stores in honey bee hives across the globe. It found that colonies are routinely and chronically exposed to neonicotinoids, fipronil, and their metabolites (generally in the 1-100 ppb range), often mixed with other pesticides some of which are known to act synergistically with neonicotinoids (more on this in part III). Other non-target organisms, particularly those inhabiting soils, aquatic habitats, or herbivorous insects feeding on non-crop plants in farmland, will also inevitably receive exposure, although there are often large gaps in data for these groups. (Bonmatin, 2015) 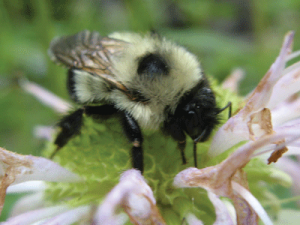 The state of our Bumblebee populations is just one example of the collateral damage caused by neonicotinoid insecticides.

The fact that neonicotinoids are capable of harming many non-target species in the environment is of great concern. At this point, the science is clear, there is little doubt that the health and population of wild pollinators is being seriously impacted by neonicotinoid pesticides.

Are Silent Springs on the Horizon?

For example, the American Bird Conservancy reported that grassland bird populations in America have declined nearly 50 percent in 30 years. This trend is similar in Britain, where on average farmland birds have declined 70 percent. Skylarks are down 80 percent and partridge levels reduced 96 percent. (Tennekes, H.A, 2010).

Neonics kill birds both directly and indirectly. A single neonicotinoid-coated seed can kill a small songbird the size of a house sparrow. Sub-lethal doses appear to cause eggshell thinning and cause chicks to die in the egg. Neonics also poison the nervous and immune systems of bird populations. As early as 1998 French scientists were finding dead partridges with neonic-coated grain in the bird’s crops. Just 5 to 10 neonicotinoid-coated wheat seeds will poison a partridge outright. Over the past 10 years, since the majority of Vermont dairy farmers have started to use neonicotinoid coated seeds, Vermont hunters report that the populations of some game birds, such as woodcock and roughed grouse (which are also called partridges in Vermont), have declined dramatically in the state.

The crash in farmland bird populations that has occurred wherever neonics have been used intensively, appears to be at least partially related to their insect food disappearing. Neonicotinoids, which are soluble and persistent in water, (Tišler 2009, Roberts 1999, PPS 2016) are washed out of fields (Hladic 2015) and kill invertebrates living in ponds, streams and ditches – as well as the larvae of insects which are food for birds and their chicks. (Hallmann, 2014, Morrissey, 2015)) 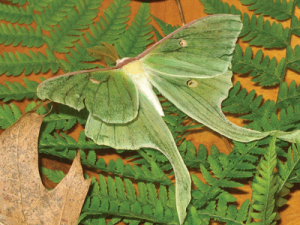 While bees get most of the attention and media coverage the populations of many other pollinators, including butterflies and moths, are in serious decline.

Butterflies in Northern California are facing many challenges, including climate change, drought, and habitat loss to agriculture and urban sprawl. Yet even with those factors accounted for, neonicotinoids seem to pose a unique threat: over the course of four decades researchers found that declines in butterfly health and reproductive success increased dramatically after the systemic pesticides entered widespread use in the mid-1990s. (Forister, 2016)

Are Bats casualties of our war on insects?

At the same time that U.S. honey bees first started to die in unusually large numbers, (2006-2007) bats in upstate New York were observed for the first time to also experience a dramatic increase in winter mortality. (Kelly 2008) While bat researchers have yet to identify neonicotinoid pesticides as being specifically behind bat die-offs, researchers in Japan have discovered that when bats are exposed to low doses of neonicotinoid pesticides, such as by eating insects containing sub-lethal doses, their brains are damaged effecting the bat’s echolocation capabilities which, among other things, can make it difficult for bats to catch insects in the air and obtain adequate nutrition. (Hsiao, 2006)

Bumble Bees in the crosshairs

The first ever study to map U.S. wild bees suggests they are disappearing in the country’s most important farmlands, from California’s Central Valley to the Midwest’s corn belt and the Mississippi River valley. (UVM 2017) If wild bee declines continue, it could hurt U.S. crop production and cost farmers, according to Taylor Ricketts, a conservation ecologist at the University of Vermont, who spoke at the American Association for the Advancement of Science (AAAS) annual meeting panel, Plan Bee: Pollinators, Food Production and U.S. Policy on February 19, 2017.

The evidence indicates that bumble bees are especially hard hit by exposure to neonicotinoids. Queen bumble bees have been shown to be over 25% more likely to fail to establish a colony after exposure to neonics. Researchers at the University of Guelph, Canada in conjunction with researchers from Royal Holloway University of London, England found “that colony-founding queens, a critical yet vulnerable stage of the bumblebee lifecycle, are less likely to initiate a colony after exposure to thiamethoxam, a neonicotinoid insecticide… This shows that neonicotinoids can affect this critical stage in the bumblebee lifecycle and may have significant impacts on population dynamics.” (Baron 2017)

When bumble bees are fed both imidacloprid-contaminated nectar and pollen (16 μg/kg [16 ppb]) they were observed to have lower worker survival rates and reduced brood production. (Tasei 2000) Even at exposure levels that are typically considered safe for bumble bees, reduced drone production and longer foraging times have been observed in bees fed low doses (10 ppb) of imidacloprid. (Mommaerts 2010).

At the very low, field-realistic dose of 1.27 ppb, imidacloprid reduces bumble bee brood production by 42%. After 14-days of exposure to levels between 0.3 and 10 ppb in syrup brood production can decline between 18% and 84%, and reduced pollen consumption has been observed at doses of only 0.2 ppb and 4.4 ppb. When provided an additional 14 days without exposure, colonies were able to recuperate somewhat and brood production was only reduced by 2% to 19%. (Laycock and Cresswell 2013). Colonies fed either 16 ppb imidacloprid or 17 ppb clothianidin for 11 weeks have experienced queen mortality, and reduced colony consumption of food and colony weight (Scholer and Krischik 2014). Since other neonics such as acetamiprid and dinotefuran are also applied to plants visited by bumble bees, it would be a good idea for investigators to look into the sublethal impacts of these neonicotinoids as well, since bumble bees do not necessarily respond similarly to all systemic pesticides.

When bumble bee colonies were exposed to 6 ppb of imidacloprid in pollen and 0.7 ppb nectar for 14 days, and then allowed to develop in the field for 8 weeks, the bumble bee colonies had an 85% reduction in the production of new queens, as well as significantly reduced colony growth rates (Whitehorn 2012). One suggestion to explain the potential causal mechanism for reduced queen production is the observation of significantly reduced pollen foraging, the result of exposure to field-realistic doses of imidacloprid. After feeding for fourteen days in the lab on a dose of 0.7 ppb imidacloprid in sugar water and 6 ppb in pollen, bumble bees were released in the field and their foraging behavior was monitored using radio frequency identification technology (Feltham (2014). Exposed bumble bees brought back significantly less forage and 31% less pollen per hour than unexposed bees. Inadequate pollen consumption has a strong likelihood of having a negative effect on queens that require abundant food during development.

In addition, it has been proposed that the sublethal impacts on bumble bee reproduction observed (Whitehorn 2012, and Gill 2012) may have disproportionate consequences. For example, decreased queen production results in fewer bumble bee colonies in future years and has the potential to lead to substantially reduced bumble bee populations. The observation that trace amounts of neonicotinoids may impact bumble bee reproduction, thereby impacting populations is cause for serious concern (Gill 2012; Laycock 2012; Whitehorn 2012; Fauser-Misslin 2014).

Bumble bees seem to be more sensitive to neonics than honey bees and this appears to be because they are affected by lower levels of dietary concentrations of imidacloprid than honey bees. This is perhaps due to the fact that bumble bees are not able to detoxify and metabolically degrade imidacloprid effectively while continuing to ingest it, something honey bees are able to do so to a certain extent. (Cresswell 2014).

Pesticide exposure and its various impacts as described above, along with additional stressors such as habitat loss from development, reduced forage availability and stress from the shifting climate is proving to be catastrophic for certain bumble bee species. A citizen science project was carried out in Vermont between the years 2000-2014, where folks across the state went out in the field and collected all the pollinators they could find. Historic collections of pollinators that exist in various museums and universities around the state were then compared with the modern day samples and dramatic differences emerged. Among other things, the study showed that there has been a 28% decrease in bumble bee species diversity in the state of Vermont with a total of 18 species having “been extirpated” within the state since 2000 and “some other persisting species showing strong decreases in relative abundance. Observed species declines broadly accord with those reported elsewhere in Eastern North America, and include members of the subgenera Bombus and Psithyrus, as well as B. fervidus and B. pensylvanicus.” Some bumble bee species (Bombus affinis, B. ashtoni, and B. terricola), were relatively abundant in 1999 but appear to have greatly declined, or to have completely disappeared from the state by 2014, and are now listed as either endangered or threatened under the Vermont state endangered species statute. Studies such as this are important for providing baseline data “to which future surveys of these functionally important insects can be compared.” (Richardson, 2017)

A similar situation for bumble bees appears to be taking place all across the U.S. Things have gotten so bad that earlier this year, despite the reluctance of the Trump administration, the Rusty Patched bumble bee (B. affinis) became the first bee to be added to the U.S. federal endangered species list.

This is just a sampling of the evidence that wild pollinators are not only being exposed to neonicotinoid pesticides as they are being used today, but that this exposure is seriously harming wild pollinators both directly and indirectly. Next month we’ll take a look at what the neonicotinoid family of insecticides is doing to our honey bees.

Fauser-Misslin, A., B. M. Sadd, P. Neumann, and C. Sandrock. (2014) Influence of combined pesticide and parasite exposure on bumblebee colony traits in the laboratory. Journal of Applied Ecology 51(2):450–459.

Laycock, I., and J. E. Cresswell. (2013) Repression and recuperation of brood production in Bombus terrestris bumble bees exposed to a pulse of the neonicotinoid pesticide imidacloprid. PLoS ONE 8(11):e79872.

Ross Conrad is the author of Natural Beekeeping: Expanded  and Revised 2nd Edition.