Many years ago, an 11-year old neighbor girl followed me around the bee yard.

For three or four years, Lindsay called herself my apprentice. Then her bees died, she grew up, went to college, and fell in love. We attended her wedding yesterday. I hugged the bride, and we reminisced for a few minutes between the father/daughter dance and the cake cutting.

Returning home after the reception, I checked the answering machine. It was blinking frantically. Here is a transcript with only the contact information changed. It’s hard to express the emotion with mere words:

This is an example of a category five swarm call. I’m the emergency bee contact person for Steuben County 911. That means I get first dibs on any swarms that are called in. If it’s too far away or too high, I call another beekeeper. If my apiary is full, well, I’ve never had too many bees, just not enough bee boxes.

Despite the late hour I immediately called her back, knowing I might have to figuratively talk her off the ledge. She picked up at the first ring.

As soon as I introduced myself, she launched back in, almost like she had just hung up to take a breath. I learned that the swarm had flown away once, and then came back. After a few minutes and after repeating my questions several times, I learned that the bees were indeed still hanging in a tree, not too high up and yes, even though it was an ornamental, I could cut as much out as necessary to remove them. I promised I’d arrive by seven the following morning and take care of them.

“How much will this cost?” she asked.

“Nothing. It’s my service to humanity.” I answered, then suddenly remembering how far I had to drive (27 miles) and how small some swarms can be, I added, “Maybe just something to cover the fuel.” 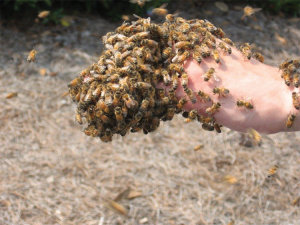 I arrived at her mobile home at dawn. She came out and pointed at what I would call a typical easy swarm, five feet high and about three lbs., or roughly 10,000 bees. I stuck my hand into the swarm. This gives me the aura of a magician, plus it calms peoples’ fears when they realize that the bees will not sting every person and dog in sight.  I explained why bees swarmed and told her to watch for a secondary swarm in a week or ten days when the queen cells hatched. Then I shook them into a box with a screen window for ventilation, taped it shut, and stowed it in the van. She handed me a folded up bill. I thought I saw Jackson’s portrait, more than I would have asked. I thanked her and drove home. Checking my pocket I found she had actually given me $50. The bees are currently residing in hive #11 in my apiary.

The first swarm of the year is always the most fun, especially if your client has never seen a swarm in her life. Fear turns to amazement which turns to fascination. It’s a little like watching a two-year-old child discover a big dog or a duck. It’s even more like showing an eleven year old neighbor girl a frame of little baby bees chewing their way out of their cells. I bet you don’t remember when you thought baby bees were as cute as kittens.

It also rekindles that feeling you had with your first hive, if you can remember that far back. By the end of the swarm season I will be sick of swarms. I may have a couple swarms in cardboard boxes waiting for me to pound together more frames and foundation. But the anticipation of the first May swarm sharpens as the memory of the last September swarm fades.

The small hive beetle (SHB), a pest affecting honeybees, bumblebees and stingless bees that has been present in…