On the 20th December 2017 the United Nations (UN) General Assembly adopted a resolution declaring 20th May World Bee Day. Every year on this day the global public will have their attention focussed on the importance of preserving honey bees and all other pollinators, and people will be reminded of the significance of bees in providing for the needs of humanity. They will also be invited to take positive action to preserve and protect pollinators.

Along with many other leading world figures, Pope Francis 1., current Pope of the Roman Catholic Church, declared that he welcomed the World Bee Day initiative which is all about raising awareness of the importance of bees and apicultural products. It is about protecting and supporting bees alongside the beekeeping sector. Equally important is actively contributing towards alleviating global poverty and eradicating hunger whilst preserving a healthy environment and its biodiversity.

The idea for a World Bee Day was conceived at 06:30 hours on 15th September 2014. Slovenian beekeeper Bostjan Noc was driving to work at The Slovenian Beekeeper’s Association where he is president, listening to a radio programme about World Days and their meaning and he wondered why bees didn’t have their own day. Considering that every third spoonful of the world’s food relies on bees and other pollinators, and that bees are increasingly endangered and almost no longer able to survive without human interventions and support, it seemed only right that the global public should be made aware. 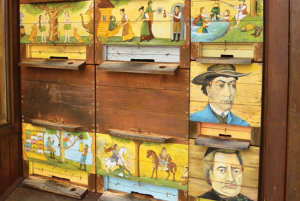 It took a tremendous amount of work and effort to make it happen but, with the support of Slovenian beekeepers and government departments, three years later Bostjan’s seemingly unattainable goal was achieved.

Placed in the center of Europe and sharing borders with Italy, Austria, Croatia and Hungary, Slovenia is one of the top beekeeping countries in the world with every 200th inhabitant a beekeeper. For tens of thousands of Slovenian citizens beekeeping is a way of life with a very long tradition and its importance is also seen in the beautifully painted hives which are commonplace in that country. This country is home to Apis mellifera carnica, the Carniolan bee which developed 10,000 years ago in the valleys of the Karavanke mountain range on both sides of the border between Austria and Slovenia.

Slovenia became one of the first countries in the EU to prohibit the use of certain pesticides harmful to bees, which reflects the genuine respect for bees at all levels, from government down, in that country.

May was the chosen month for World Bee Day because in the northern hemisphere the need for pollination is greatest during that period, whilst in the southern hemisphere it is a time for harvesting honey and bee products. The Slovenians honoured their national beekeeping “treasure” Anton Janša (1734-1773) by choosing his birthday, May 20th, to celebrate World Bee Day. 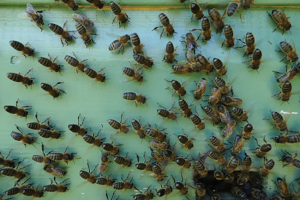 It was common practice at that time to kill off most of the bee colonies before Winter and then harvest their honey, but Janša wrote in one of his books, “I do not kill bees to get honey and wax. I keep them strong and healthy, so they will bring me honey again next year.”

We have come full cycle back to focussing on sustainable living and I’m certain that Janša would approve of our endeavours.

What will you do to celebrate World Bee Day this year? 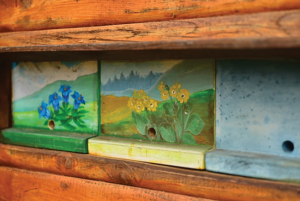 I’m contemplating making a honey cake and inviting friends round to raise funds for Bees for Development which is a charity based in Wales, UK, that has been working tirelessly for 25 years to promote beekeeping to combat poverty and protect biodiversity. Bees can give people the means to pay for food, and their children’s education, and to improve their land and crop yields. In the past two years 650 people in Ethiopia have been trained in beekeeping by this charity that relies on donations from the public. In the USA, Megan Denver of Hudson Valley Bee Supply is the American representative for Bees for Development and donations may be made via megan@hudsonvalleybeesupply.com

I shall be making a light honey sponge cake with rich Italian marscapone cream cheese. Ideally chestnut honey is chosen because of its rich nutty flavour but, with it being hard to obtain in the Scottish Highlands, I shall be going for something different like a heather/ragwort mixture. Any flavoursome honey will do.

Recipe for making a 20cm/8inch cake:

Beat the eggs and sugar till pale, fluffy and doubled in volume and the sugar is dissolved. Continue beating and slowly pour in the honey in a continuous stream.

Sift the flour twice then sift again into the egg and honey mixture. Fold in quickly with a metal spoon then fold in the butter and hot water.

Pour the mixture into the sponge tin. Bake for 20-25 mins until the sponge is a rich golden brown and an inserted skewer or pointed knife comes out clean. Allow to cool for five to eight mins before turning out onto a cooling rack.

To make the topping, mix the marscapone and two tablespoons of honey together.

When the sponge is cool, slice it horizontally with a bread knife. Place the base on a serving plate and spread it with half the marscapone mixture. Replace the top and spread with the remainder of the mixture. To decorate, drizzle the remaining honey over the top to create swirls.