The toxicity of oxalic acid (OA) to Varroa has been known for nearly three decades based on experiments conducted in Asia and later in Europe. The initial tests compared spraying weak OA solutions on bees, trickling OA sugar syrups into honey bee colonies and OA fumigation (vaporization). All of these methods demonstrated very high efficacy and were quickly adopted by beekeepers.

Early use of OA by European beekeepers involved spraying each comb of bees in broodless colonies with a 2%-3% OA water solution. The technique was effective but time consuming since each comb covered with bees had to removed and sprayed on both sides for control. The treatment was later modified to make the application more efficient by adding the OA into sugar syrup and ìtricklingî 5-6 ml on the bees clustered between combs. The role of sugar is unclear since minimal OA syrup is consumed by the bees and mite mortality is from contact with the acid. It is thought that the sugar solution adheres to bees better or the sucrose makes the solution more hygroscopic.

During the 1990s European bee researchers tested the effects of different OA concentrations and syrup solutions on both the mite and bees via the trickle method. Researchers found optimal Varroa control at OA concentrations between 2.1% and 4.2% with concentrations of 2.8% and 3.5% the best regarding mite mortality and minimal damage to bees. Researchers also compared Varroa mortality in OA treated hives when brood was present vs. absent. Varroa mortality in hives with brood was 25% and 39.2% at the 2.9% and 4.2% OA concentrations and 97% and 99.4% respectively under broodless conditions. Experiments indicate that increasing the dosage of OA above 3.5% does not improve efficacy and high doses of OA arenít used due to bee toxicity. Research clearly demonstrates that OA is most effective in broodless colonies for both the trickle and fumigation techniques. The application of OA via trickle or vaporization in late fall/early winter affords beekeepers and excellent Varroa ìcleanupî for colonies with residual mite populations that rebound after late Summer Varroa treatments and/or hives that become reinfested by robbing hives undergoing Varroa collapse.

Trickle Treatments
As is the case with other registered Varroa controls, researchers have also identified issues related to the OA trickle treatment. For example: 1-When brood is present repeated applications of OA can result in higher queen and adult bee mortality and a reduction in the amount of brood that can last for two months. 2- The midguts of honey bees fed OA sugar syrup have an elevated level of cell death but under field conditions bees tend to avoid consuming syrup with OA. (This may explain why a recent report stated that bees treated with OA have a lower nosema incidence.) 3- In some instances bees show poor tolerance to OA trickle applications. Colonies receiving an overdose (excessive amounts, short-term repeated applications or excessive concentrations) can be weak in Spring or die during Winter. Some studies have found that certain colonies do not tolerate the OA trickle even at normal doses. 4- Low temperatures can diminish the efficacy of OA treatment. 5- There may be a correlation with increased bee mortality when applied during periods of high humidity. Further research regarding high environmental humidity is needed. 6- Prolonged storage of OA syrup solutions result in a change of color to brown. Analysis indicates a high increase in hydroxymethylfurfural (HMF) that may be toxic to the bees if ingested. As a precaution, it is recommended that beekeepers administer freshly prepared solutions of OA syrup or use premixed solutions that are stored in the refrigerator. Solutions can be stored for a maximum of six months at a storage temperature of 59 degrees.

Vapor Treatments
There is much less published literature regarding OA heat vaporization (sublimation) in comparison to the OA trickle method. Research and reports from beekeepers indicate that the vaporization technique does have some advantages. Research suggests it is less detrimental to adult bees, brood and hive strength following application and from the beekeeper’s perspective, there is no need to unwrap, open hives and disturb the cluster during Winter. The risk to the applicator, however, is somewhat greater due to the potential of inhalation of the OA fumes. 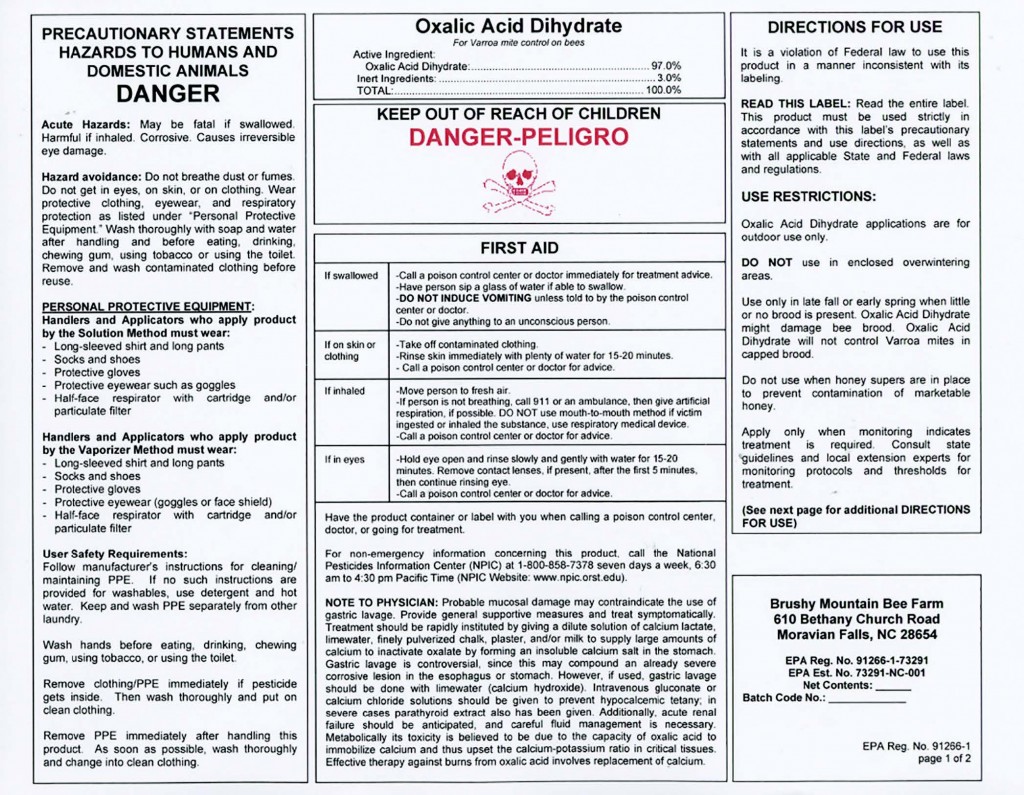 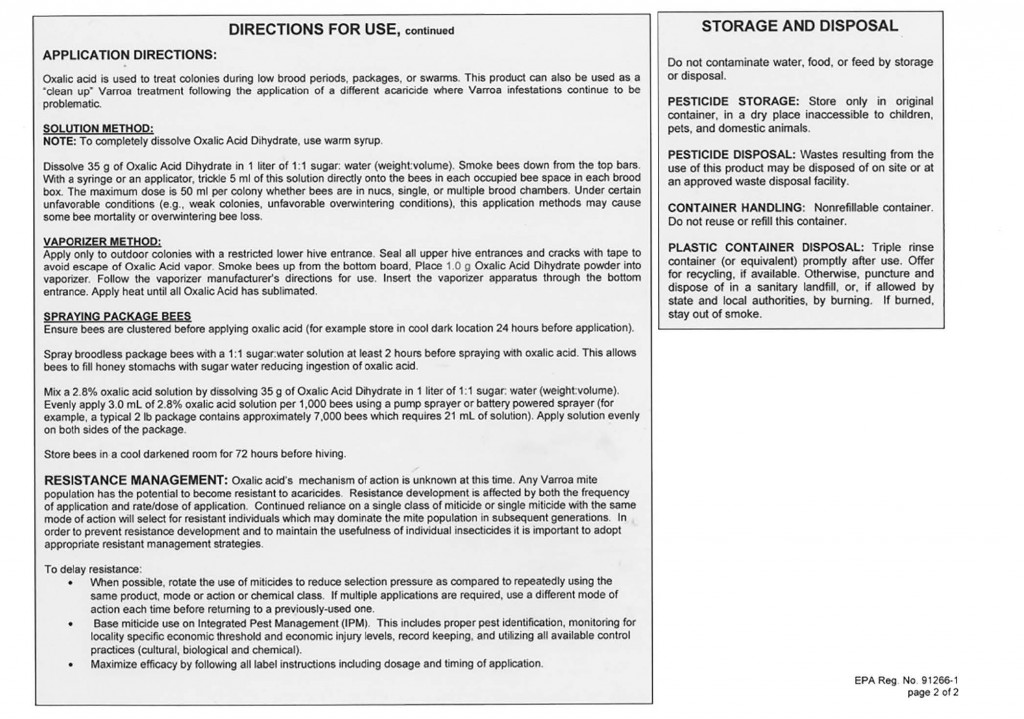 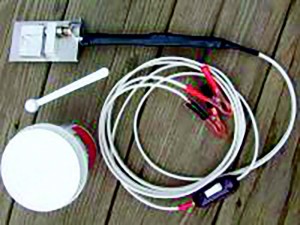 European research indicates that when brood is present, vaporization three to four times at weekly intervals in Spring is an effective Varroa control. However, the U.S. OA label does not address this strategy and European recommendations prescribe treatments during broodless periods at temperatures between 35-61∞.

There are two methods used to vaporize (sublimate) OA, passive and active. The passive method involves placing the prescribed amount of OA (1 gram/hive body) onto a mini battery powered heat plate that is inserted into the hive’s entrance. After insertion the hive entrance is closed with foam or a piece of cloth and the electricity is applied. The crystals melt and sublime into smaller crystals that disperse within the hive covering the bees and hive interior. All other entrances and openings such as cracks must be closed or taped shut so the fumes don’t escape and reduce treatment efficacy. It takes approximately three minutes for the OA to sublimate and it is recommended that the hives remain closed off for 10-15 minutes after treatment. There are several passive Varroa vaporizers on the market. Examples include the: Varrox-vaporizer from Switzerland, Heilyser Technology vaporizer from Canada, Varroa cleaner from Serbia and Kiwi Vaporizer from New Zealand. There are other home-made vaporizer designs marketed.

The other method of OA vaporization is the active method in which the OA crystals are heated within a container until sublimation occurs outside the hive. After sublimation, vapor is blown into the hive entrance. These gizmos typically require a heat gun, source of electricity and air compressor for some of the designs. Lega bee supply from Italy markets one of the designs. For some entertainment, do a google search on commercially available and homemade OA vaporizing contraptions. Some of the designs featured on YouTube do not appear to be safe or effective!

It is imperative for beekeepers to read the Oxalic Acid Dihydrate label prior to use and follow the directions. Although OA is considered an organic mite control, it has a ìDanger-Poisonî signal word on the label meaning it is highly toxic and corrosive. Beekeepers need to adhere to the personal protection label requirements and the personal protection equipment (PPE) statements. Do not apply OA to hives of bees with supers in place so honey is not contaminated with this toxic substance.

Late Fall or early Winter Varroa treatment with oxalic acid is a valuable component for honey bee pest management. The use, efficacy and safety are well-documented in Europe and elsewhere when used properly in accordance with label instructions. With time and experience, beekeepers will find that OA treatment fits an important need as a Varroa “clean-up” that will ensure healthy hives in Spring. Please read and follow the label. Remember, “The label is the law.”

Tony Jadczak is the State Apiary Inspector of Maine, and oversees the second biggest pollination event in the Universe when thousands of colonies come to Maine each May for wild blueberry pollination.