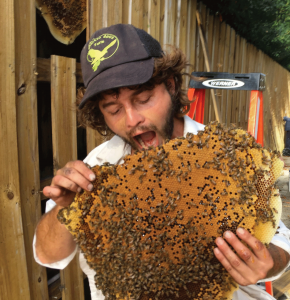 Sam Comfort of Anarchy Apiaries is on a mission – two missions to be precise:

After watching a hive inspection being conducted in 2002, Sam got his feet wet working with bees by getting a job working for a 1000 hive operation in Vermont in May 2003. As Sam tells it, “Mostly I bummed around several beekeeping jobs and learned what I could while I could take it. Kirk Webster was the first I guy I met who made any sense. He was the only person I knew who trusted the intelligence of insects and told me that both they and I would be ok if I didn’t medicate them. I copied a lot of his methods of wintering the Summer splits to back up the operation, ‘expansion beekeeping.’  Then I visited Dee Lusby in Arizona and witnessed ‘shotgun beekeeping’ with these intense, huge hives that had each raised their own queens for decades and were always five deeps tall.  I draw some elements from both of these treatment-free operations.

“I haven’t treated for anything since acquiring my own bees and learning to graft queen cells in 2005. I think of genetics, management, and nutrition.  The Anarchy stock has a broad genetic base – I mean it hasn’t been messed with for the hundreds of generations to be productive like typical Italian bees. I think viral resistance is way more important than breeding for hygienic behavior and low mite counts. We want bees that can host any number of mites and still not get the diseases. Viral assays are still too expensive, so the only way to do that is let them run their course and don’t breed from the dead bees. This is the only way out of the mite problem – stop seeing it as a problem that a beekeeper can fix.

“I use to break the brood cycle by requeening everything with queen cells or letting them raise their own queen, or letting them swarm – but my hives have never swarmed before (ha, ha). Now, hives seem to handle what life throws at them as long as they have the resources.  It seems you can take about any kind of bee, and do about whatever to them – as long as they are in a really good area, they have a chance of pulling it off. I buy clover and buckwheat seed every year for the farm that hosts the mating yard in NY, the headquarters that the Whistle Down Farmers call Bee Village. This year I provided them 200 pounds of buckwheat – about $150 – to cover crop about three acres for the late Summer dearth, as well as 100 pounds of yellow sweet clover seed – total of $260 – that was spread over about six acres. It will bloom next year and lookout! I got another 300 pounds of buckwheat I passed out to other farms, and I plan on broadcasting at least 200 pounds of Dutch clover myself in Winter months. It will total about $1000 in seed and it makes a noticeable difference in bee health, honey production, and overwintering. These areas have the best survival rates. I think we’ve spent the last 25 years talking about Varroa mites (and breeding them to be nastier) while the bee forage has been swept from under our tarsal segments.”

According to Sam, “I realized my first day on the job that beekeeping was the hardest thing I had ever done, and that’s why I wanted to stick with it. I still keep it a challenge, honing the methods of raising bees – weekly I get to try to see how many queens can be caught, and how plump they will be, and in general, how I can make this operation replicable in other areas for other beekeepers.

“I believe the golden era of beekeeping is yet to come. We have great beekeepers and great bees here. They just need the respect they are due from the rest of agriculture. The forage needs to be cleaned up. Non-chemical farmers ought to be treated like rock stars.” 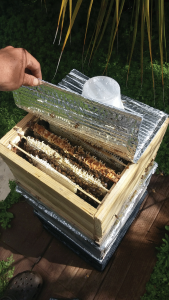 Sam believes that, “Beekeeping for a living can in fact be enjoyable, not just profitable and grueling work. I like to keep the sense of wonder every day. I focus on input/output in the apiary and how different parts work together, basic permaculture. The mating nucs provide super-nourished, clean brood for the cell raisers, and weekly there is a huge surplus of brood and queens to stock out yards if needed. I support the baby hives, then once they are teenagers they have to find jobs of their own. I don’t feed anything that’s bigger than a nuc. I don’t wrap for Winter. I do still complain plenty, I’m good at that.”

Sam divides his time between New York and Florida and manages about 600 full-sized colonies and about 360 mating nucs. Half of the large hives live and stay in the Hudson Valley, in New York state, and half live and stay in southeast Florida. The mating nucs are stocked and then combined with the seasons (January to April in Florida, and May to September in New York).

As Sam puts it, “These produce several thousand queens a year. I try not to make honey- sticky, awful stuff it is – but end up harvesting a few thousand pounds each year, as well as a lot of wax.” Sam brings breeding stock for queen mothers and drone producing hives from New York south to have early winter-hardy queens with as much control over the genetics as possible. 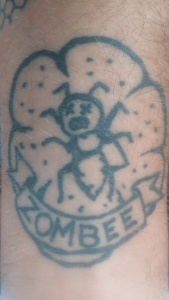 Some beekeepers wear their heart on their sleeve – not Sam who sports a ‘Zombie’ forearm tattoo.

In the past Sam has sold nucs and produced package bees, both from southern and northern locations. “Now I like focusing on producing quality queens and have a network of friends who produce the bulk bees to support them. We catch from 120 nucs a week.  Queens are caught three weeks after cell placement, with their own capped brood present. The mothers are marked, three to four year-old New York survivors,” he says. Sam goes on to explain, “We have Florida-based bees, certified European by the Florida Department of Agriculture and Consumer Services (FDACS), but we focus on and sell northern stock. We bring in some new breeding material every couple of years. We have Russian-based bees from Kirk Webster and Andrew Munkres, Russian bees from Bob Brachmann and Charlie Harper, Carni-mixes from Michael Palmer, as well as survivor mutt stock from Zia Queen Bees, Olympic Wilderness Apiaries, and Tim McFarline in Benson, Vermont.  We’ve mixed these with established NY wild colonies from removals, which are likely adapted Italian mixes. Basically we call them survivor mutts, or Zombees- ‘cause without treatments the bees are obviously dead but still flying around.”

As Sam describes it, he works with alternative hives, though he has tried out many styles and variations. “The very best kind of hive design to use is – you ready? – the one you make yourself.  I’ve experimented with odd shaped Langs, top bar hives, Warres, log hives, skeps, Quinby box hives, the Nutt’s Collateral Hive, little clay pots, five gallon buckets. I started my own operation selling bees born and raised in Kenyan top bar hives, but these days I mostly like box hives that are 13” by 13” by 6”. It’s a great size for a nuc to be constantly messed with, or we can stack them up to be honey producers that get minimal attention. The bees make their combs off of bamboo barbeque skewers. I can make the entire hive quickly, cheaply, and without the use of a table saw. But really if you just show me a dumpster I can make a couple of beehives out of the contents,” says Sam.

As you can see, Sam is unique among beekeepers, and it’s not just because he doesn’t have grey hair (as far as I can tell). So what is the best thing Sam likes about keeping bees? “Aside from getting stung, which is my favorite part, I like the crazy people. Beekeepers are a bunch of incredibly diverse weirdoes. To promote beekeeping is to promote making the whole world weird. And that diversity just might come in handy someday.” When asked what the most difficult part of beekeeping is for him, he says, “Making time every six or seven years to update my website. And getting back to people’s emails, calls, and texts in a timely manner. It’s social insects, not media, around here. He goes on to say, “Picking up the dead in the Spring is always tough, specially knowing that they might have made it if I fed them or moved them to greener pastures. Seeing the survivors thrive is always exhilarating, and typically 70-80% make it through Winter without any help from us, and rebounding from heavier losses would also not be a problem.”

What does Sam see in his future? As Sam puts it on his website, he learns from the hives. “Years ago, I used to think I was saving the bees when we started breeding with Russian stock without mite treatments in Vermont. Now I find that idea of ‘saving’ presumptuous. To let things bee wild, I had to start all over. And get out of the way.” His website goes on to say, “Let’s help each other change the sheets on the deathbed of industrial agriculture. Promise yourself to slow down when you eat and savor your food. Support a network of bioregional wisdom, and keep it simple enough to teach a child. What we teach our children is the next world to be. A place where the wild things grow.” 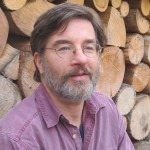