I have been wearing the same underwear for 25 years. And the only thing weird about that is how well they have held up. In the late 1990s, my dear sister sewed each of her brothers a pair of blue polypropylene long underwear as gifts. These were much appreciated and much worn. To my amazement, after thousands of uses (and yes, quite a few washes), my pair persists and is still in the winter rotation, alongside more recent commercial versions. Why?? They seem to be made of the same stuff and my sister, while talented in other ways, is not known as a world-class seamstress. I chalk it up to resilience in fabric and (more likely) dense stitching. Some honey bees and their colonies share this resilience and a lot of effort and money is directed at finding out why.

Honey bee colonies are fundamentally resilient compared to other insects in several ways. First, colonies can withstand losses of thousands of worker bees and still recover. As one extreme, they routinely cut themselves in half and both halves survive. Additionally, they can reconstitute their most vital reproductive organ, the queen, from a single egg she has left behind. Colonies also survive a wide range of temperatures and humidities, in part because they regulate both of these in their living quarters. Arguably, they tolerate a greater range of climate and temperature zones (from Maine to Miami and beyond) than all animals besides humans. Honey bee colonies also seem to make things work whether they are in a continual brood cycle, as are many commercially managed bees, or subject to short active seasons and long winters, as found toward the poles. While there is evidence for genetic bee lineages that do best in particular climates, the fact is that most honey bees will survive at any place in their worldwide range.

Still, if honey bees are so resilient why is so much effort needed to keep them alive? And why do they fail us so often? Bees and beekeepers regularly face three major challenges: a wide range of biological threats (parasites and pathogens, mainly, with cameos from bears and badgers), a food landscape that lets them down, and exposure to damaging chemicals. Professor Tjeerd Blacquière, from Wageningen University in the Netherlands, a leading agricultural university, has spent decades trying to understand honey bee resilience and working with beekeepers to improve the genetic traits that lead to resilience. The data from this research, and the improvements seen, show how sustained scientific effort leads to practical improvements for beekeepers. Blacquière and Delphine Panziera have summarized their thinking in an openly available article from Bee World, “A Plea for Use of Honey Bees’ Natural Resilience in Beekeeping” (2018, volume 95:2, 34-38, DOI: 10.1080/0005772X.2018.1430999). They highlight several factors in the search for resilience, including both management and breeding ideals. The authors favor longterm ‘survival’ or ‘black box’ selection, whereby colonies are subjected to known stresses and then culled by the forces of selection, over the ‘trait-based’ selection found to be successful in many breeding programs. In trait-based selection, a key indicator of fitness is used to push populations; things like mite levels, hygienic behavior, or genetic markers for desired traits. Black-box selection, on the other hand, finds and exploits numerous genetic variants found in any population by subtly pushing the good combinations to higher frequency through stresses. The measures of success are as fundamental as colony survivorship, colony mass or reproduction by splitting. Both strategies can work and both have fan clubs. Perhaps the greatest challenge to natural selection approaches comes not in finding colonies or apiaries that do well, but in maintaining those traits for the long term, i.e., when selection is relaxed or the genetics of these colonies are diluted. Natural selection can favor expensive responses that serve a purpose for a certain time but are less useful later and hence are swiftly lost.

Trait-based selection suffers from the whack-a-mole liability. One can focus intensely on a single trait against a single threat and fail to protect against the next one and the next thereafter. Still, trait-based selection regimes used by breeders and scientists are often sophisticated and additive (e.g., bees that show hygienic behavior towards mites can be selected simultaneously for other behaviors such brood rearing patterns, or even non-behaviors such as individual immunity). As a geneticist, trait-based selection is more in my comfort zone, but it is fascinating to read the successes of Professor Blacquière and his ‘black box selection’ colleagues.

In some ways, the trait-selecters and the holistic crowd aren’t far apart at all. As Panziera and Blacquière found, one of the predominant traits of resilient bees is Varroa sensitive hygiene (VSH), a trait high on the list of trait-selecters (Panziera, D., van Langevelde, F., & Blacquière, T. (2017) Varroa sensitive hygiene contributes to naturally selected varroa resistance in honey bees. Journal of Apicultural Research, 56, 635–642, https://doi.org/10.1080/00218839.2017.1351860). Interestingly, though, a second resilient population from this same study showed VSH levels identical to controls, supporting their hypothesis that selection can run with multiple traits that are effective against strong threats. With Swiss colleagues and led by Arrigio Moro, Blacquière and Panziera recently scored multiple populations that had been under survival-based selection in the face of mite pressure. Again, VSH was important some of the time. Interestingly, the mites themselves also seem to have changed in the surviving stock. Clever cross-fostering experiments of mites from the two lineages suggest that mites in surviving populations become less impactful on their obligatory bee hosts after only a few years. (Moro, A.; Blacquière, T., Panziera, D., Dietemann, V., Neumann, P. Host-Parasite Co-Evolution in Real-Time: Changes in Honey Bee Resistance Mechanisms and Mite Reproductive Strategies. Insects 2021, 12, 120. https:// doi.org/10.3390/insects12020120). 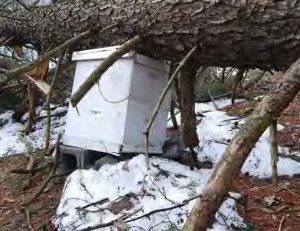 First, start big, with 25-30 colonies or more. Keep this selected population away from other gene pools. Even more challenging, withhold all human controls for Varroa mites. Minimize other stresses such as food stress and, presumably, chemical stress. And don’t expect results for four years or more. They also give guidelines for maintaining right-sized colonies and for housing and assisting swarms from successfully fit colonies. If you have the means, patience, and constitution to do this, report back in 25 years. I will be working on my second pair of underwear by then.

Finally, while we should all aim to use disease controls only when absolutely essential, please do not use this method if you cannot maintain distance from neighbors who are not on board. Your failing colonies will deliver mites to them, and their middling genes will hurt your chances of developing a special group of survivors.