This NYPD Beekeeper Has Subdued His Last Swarm

In late August, tourists and New Yorkers in Times Square spotted something above the heads of the costumed characters and tour bus ticket sellers: a swarm of bees taking up residence on a street pole right at 47th Street and 6th Avenue.

But the NYPD’s official beekeeper for the last eight years, Officer Darren Mays, had retired just the day before. And he was not coming back for one last swarm.

“They called me for it, but I told them that I’m officially retired and my job is done!” Mays said.

Instead, the department’s new beekeeper, Det. Robert Travis, had the honor of removing the swarm and preventing passersby from getting stung. 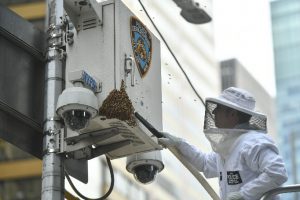 Det. Travis on the scene in Times Square in August.

Mays had taken on the mantle of the police department’s beekeeper following the retirement of Detective Anthony “Tony Bees” Planakis in 2014. Since then, when not patrolling the streets of the 104th Precinct in Queens, Mays has been one of the first people to respond when clouds of bees take pit stops in populated places while searching for a new, permanent home.

While Mays is leaving the NYPD behind, he’s sticking with the bees by learning more about the commercial side of the beekeeping business, in order to make his longtime hobby and side-gig into a full-time career. But first, he spoke with Gothamist/WNYC about what it’s like being the NYPD’s official beekeeper. This interview has been lightly edited for clarity.

A lot of people might be surprised to learn that the NYPD even has official beekeepers, right? Is this a normal thing that police departments have, or is this unique to New York?

You know, people think it would go to the Parks Department, but it became a police thing, you know, who’s going to get the first 911 call? Police officer.

Is it a full-time gig? Or are you also going out on normal patrols?

Yeah, it’s a seasonal position. And I was, you know, midnight patrol police officer in the 104 Precinct. The beekeeping just runs from April until September and October, because I got a lot of calls for yellow jackets and hornets nests and everything like that. But for the honeybee swarming, July’s usually the end of it.

What are some of the craziest things that you’ve had to respond to?

Well, yellowjackets are no fun, honeybees are fun because, you know, you can have them land on a bicycle, the side of a building, even our police cameras, probably one of my biggest and best one was on Dyckman Street a few years back. A large swarm, probably like 40,000 bees.

In a tree on Dyckman Street. I shook them into a box, half of the bees fell on the ground. So I put this box on the floor. I opened the opening on it. Within 15 minutes, 15,000 bees that fell on the ground were marching in that box. They follow the pheromone scent of their queen. Once they know that queen is inside, they all going to start marching in. It was exciting.

This NYPD Beekeeper Has Subdued His Last Swarm – Gothamist