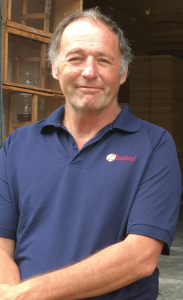 I’ve had the pleasure of working with Mark Bennett for years. Mark is the branch manager of the Chatham Dadant in Tightsqueeze, Virginia. Seriously, it’s called Tightsqueeze. He has bailed me out of many emergencies in beekeeping for missing equipment, as previously written in some of my other articles. I can call him up and get a ridiculous order (like enough Apiguard to treat a few hundred hives, or 5,000 plastic frames, 300 wooden-bound metal queen excluders, AP-23 pollen patties and pollen mix for a few hundred hives, or full equipment for double deep hives for 600 colonies) sometimes as fast as next day delivery, or even the same day via Dadant personal delivery straight to our apiary if it’s in stock at his place. He and his crew have all been super accommodating of all of our requests and as helpful as possible with our insanity. I figured we’d kill two birds with one stone and head up to see Mark for an interview and pick up whatever else we were missing while we were there – which was a total of four of the breathable mesh jackets and veils, 10 pails of Apiguard (or maybe 11), some of the new swarm catcher “Swarm Commander” as effectively demonstrated accidentally at the EAS meeting this year, and some really cute beekeeper keychains for our permanent technicians. I also was distracted by the super precious cat that greeted me named Boudreaux who turned out to be incredibly photogenic, along with Sissy his sister who was not quite so curious. Occasionally, Bobby got a question in too.

Jessie: Okay so first, what is the cat’s name?

Mark: Boudreaux is the one out there, and Sissy is in the warehouse.

Jessie: So how long have you been at Dadant?

Mark: I’ve been at this Dadant since 1999, seventeen years in Virginia and another 15 years up in Michigan, so 31 years total.

Jessie: What brought you down to the south?

Mark: Weather brought me down to Virginia. I am originally from the Appalachian Mountains in New York. It’s a good 15 to 20 degrees warmer in the Winter down here than in New York or Michigan.

Jessie: How did you get the Dadant job down here?

Mark: George Kelly used to be the branch manager and he retired, so I was hired to replace him.

Jessie: When you started working in Virginia, how many people did you have?

Mark: When I started, we had three people, but now we have five. John has been here for 35 years. His dad ran the Lynchburg location and John just moved down here six years ago. Emily has been the office manager for seven years. Matthew has been here less than a year to help in the warehouse, and Patrick came in as the sales manager two years ago. 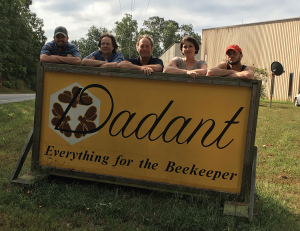 Jessie: Tell me about your kids. Some of them have worked here, right?

Mark: I have five kids and four grandkids. Three of them have worked here at some point. My oldest boy is an artist and designs album covers for death metal bands. Emily is the only one with a hive, but the kids don’t really do much with bees at home.

Jessie: What’s your biggest customer type here? Are there a lot of commercial beekeepers in the area or is it mostly hobbyists?

Mark: We’ve had an influx of hobbyists and beginner beekeepers. There are maybe only 10 to 15 commercial guys in the area. The Chatham county beekeepers was made up of only five to six people and now has around 40 people. Most of the clubs have grown exponentially in the past eight to nine years from publicity and press on honey bees. The dynamics have changed some too with a lot more women beekeepers, younger people, highly educated people like doctors, and also preppers. I sell 13 to 15 hundred packages each year to hobbyist and beginner beekeepers. It’s an expensive hobby with it costing so much just to treat for Varroa. There’re so many things you have to take watch for now. You know we have the zombie bees and Franklin County had an experience with that.

Bobby: So how did they know they were zombie bees?

Mark: At night when most of the bees are in the hive, you’ll see them flying out towards light like the moths.

[At this point, Bobby and I look at each other worriedly. We had just been talking about some weird couple of bees buzzing around our porch light the night before and thought it was weird. We didn’t see them again though]

Jessie: What do you see the most from beekeepers to make profit?

Mark: There’s a lot more people selling bees because there’s more money in it. Larry Connor’s projection was that if you start with a hundred hives, you could make about $35,000 per year selling nucs if you had a hundred percent survival in your colonies.

Jessie: Do you do a lot with wax here?

Mark: We sell a lot of wax to candle makers. We have one that buys about a thousand pounds every two months up in Lynchburg. We get our white wax out of Florida where they refine it with acid to bleach it out. Some people ruin wax trying to use bleach to make a white wax.

Jessie: Tell me about Varroa and oxalic acid.

Mark: Well, oxalic acid has some controversy but it’s a hot topic right now. The jury is still out on how to use it because it doesn’t reach capped brood. You can treat when there’s brood but it might get damaged, or treat when the hive is broodless but it might be too late. A lot of people think it’s ineffective, but it’s a lot cheaper per hive than most of the other treatments.

Jessie: Tell me your best story of someone treating a hive wrong. I know you have one.

Mark: Well, in Michigan, a guy was mixing coumaphos with kerosene and lighting it on fire in front of the hive. He ended up in the hospital from the toxicity. A lot of people use these pesticides illegally to try to treat for Varroa and cause contamination and resistance in the hives.

Jessie: What’s the biggest challenge in your job?

Mark: Getting enough stock to get out to people is the biggest challenge. Keeping inventory tight is encouraged by the company and not having too much overstock. Getting foundation in the spring is a real problem for us. Everyone in the bee business has a similar problem of trying to meet demand but not having a lot of equipment left over. I was a dairy farmer first, and that’s an even tougher job than this one. You are directly affected by your mistakes. Here, the corporation can absorb some of the impact if something happens.

Bobby: Do you sell a lot of eight frame equipment?

Mark: We do sell some and I prefer it. My wife swears that our eight frame at home does the best but I haven’t had a chance to look at it. It’s also lighter and easier to handle.

Jessie: What are some of the differences between Michigan and Virginia for keeping bees?

Mark: Oh it was easier in Michigan. Down here, they don’t get a set cold time and they just eat through everything. In Michigan, I would extract a hundred and 20 to 30 pounds of honey per hive starting from packages and here I’m lucky to get 50 pounds from 15 hives. We’ve had a lot of clear cutting around my area that takes out a lot of our tree nectar sources, and a lot of killing out the brush and weed sources with herbicides. A lot of the local ag practices are hurting the bees and we have to plant cover crops like clover and buckwheat.

Jessie: Okay, so one last question. Do you think we can get everyone together for a group picture? We could put the cats in it too!

Mark: Sure, we could do a group picture. I don’t think we can get the cats in it though. 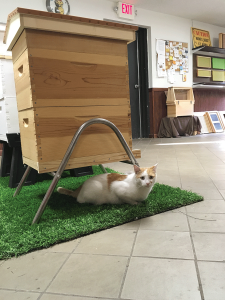 Once we finished the interview, Mark took us around and showed us the wax drop-off in the warehouse and the clean wax. He told us that John is the cat caretaker, and then Boudreaux gave us a tour of his favorite places to pose while I took 173 pictures of him and Sissy according to my iPad (as opposed to nine of Mark, once or twice they were supposed to be of Mark, but the cats were too cute in the background. Sorry Mark!). We took a few group photos, had Mark take a few selfies with us while I tried to get the cats in the background, and then we left Mark and his crew in peace for a little while – until the next day when I ordered another 100 hives’ worth of MAQS and Apivar. In the meantime, I think the Dadant group needs to get to work making a tiny beesuit for the cats – one with a veil, one with antennae and wings. I’d come visit to see that. If you’re ever in the Tightsqueeze area, you should also stop and visit Mark and his crew. At the very least, you can pick up some cool stuff, see some beekeeping history pieces, and say hello to the cats. You should also see if you can buy the wax mold of Saint Ambrose in the front office and give it to me for my birthday. Just a suggestion.