California and North Carolina, and A Funny Chicken Story.

The month of April was a busy month for us. But it was great. Kim and I along with Jean, our advertising coordinator, made a trip to California for the Olivarez Honey Bee Hobby Day. It was great. This is the second year in a row that Ray and Tammy Olivarez have invited us out there to be part of their special day. 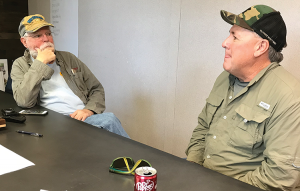 Kim chatting with Ray Olivarez, just before we headed to the beeyard.

Ray spent a big chunk of Friday with us showing us around their place, visiting the beeyard where they were shaking packages to send to our part of Ohio. This was my first time to actually see the whole process of shaking packages and getting them ready to load on the truck. It was fantastic. Ray has an amazing crew working for him.

On that Friday we first went to the beeyard and watched them shake packages. We marked packages that were coming to Jim Tew here in Ohio and then went with Jim the following Monday to pick them up at Queen Right Colonies. These guys moved fast – shaking bees from the hives into a metal screened box, then over to the funnel and scale to weigh out exactly 3.3 pounds, then into the plastic packages that already have a queen loaded into them, sugar syrup can loaded in and they’re ready to go on the truck. They are marked with a black marker on the top of the sugar syrup either with an I for Italian or a C for Carniolan and now they have S for their new Saskatraz honey bee.

After the package shaking we headed back to their main property and got to see them grafting queens, pulling queens and getting them ready to go into more packages.

The next day, Saturday, about 1,500 or more packages were picked up. Some folks were picking up just one or two for themselves, others taking a couple hundred back to their area and dispersing them to others. Kim, Randy Oliver and Larry Connor were all a part of the day. Kim answered questions that new beekeepers had. This is the best kind of format – Kim in a room with new people and just letting them ask what they want. Randy did live hive demos and Larry talked about biology. 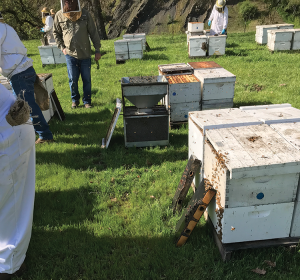 The metal screen box is carried from hive to hive until it’s almost full and then taken over to the scale and funnel. 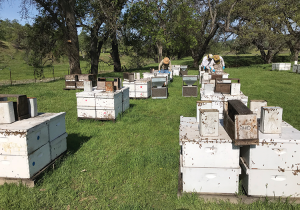 The beeyard setting was beautiful, the weather was great. It was the perfect day. 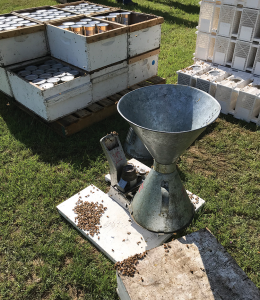 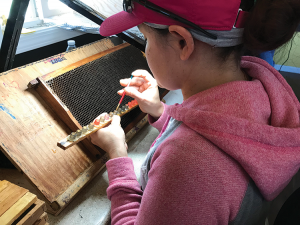 Grafting queens as fast as she can. 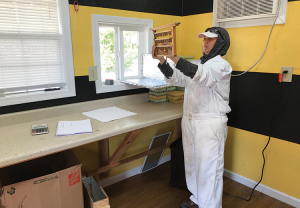 She’s counting and checking queen cells before they go into the incubator.

It’s almost a carnival atmosphere – food vendors, music, games and activities for the kids, vendors selling books and bee equipment. If you’re in northern California you should think about going next year. Ray and Tammy are wonderful hosts and they have an amazing business going out there.

Ray will be speaking at our October event here in Ohio. He’ll be telling us all about how they got where they are.

Our next April trip was to Asheville, NC for the Mother Earth News Fair. I love this trip. It’s easy, everything is close to the airport and the fair is great. There are so many different kinds of speakers, vendors, exhibits – it’s fantastic. 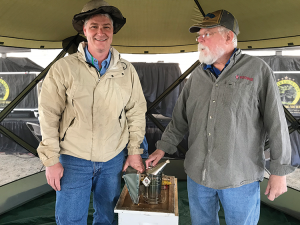 Shane and Kim getting ready at Mother Earth News Fair.

On Saturday Kim gave his ‘All About Drones’ talk and then on Sunday he and Shane Gebauer from Brushy Mountain did a live hive demo in one of the outdoor tents. They’ve done this a few times and it works really well. Shane is in a smaller tent opening and working a live hive. Kim is on the outside answering questions and showing frames of bees to the folks in the audience. They’ve got it down and work very well together. The next Mother Earth we’ll be going to will be in September at Seven Springs Resort in Pennsylvania.

And now for my chicken update. Kim often puts the chickens to bed at night (closing the door), but sometimes if I’m coming home from a meeting or dinner with friends I’ll take care of it before I come inside.

We’ve been holding at 20 chickens for quite some time now, all doing well. So a week or so ago I came home one night and went to close the door. We always count to see if everyone is in. I counted 19. Okay count again – 19. So I looked out in the pen, none out there, looked around the yard a bit – it wasn’t completely dark but I had my flashlight. Still 19. Oh well, we’ve lost a chicken, it happens. The next night I was out again, it was a busy week. Same routine. This time I counted 21 chickens. Okay, it’s been a long week and I’m tired. Let me try this again. Still 21. So I go in the house and get Kim. “Please come out here and count the chickens.” He counts 21. So we close the door and go in the house.

Still not sure what exactly happened, but apparently one of our neighbor’s chickens came over for a visit. And maybe that’s what happened in reverse the other night, one of ours went over there for a visit. But now we’re back to our own 20 chickens, doing well.

Summer like weather has finally arrived in Northeast Ohio. I hope it has for you as well. Enjoy the season.