Honey is widely accepted as a source of natural antioxidants, with applications for food preservation and human health.

In general, antioxidants are substances that prevent or delay the reduction (gain of electrons) of reactive oxygen species (ROS), thus protecting lipids, proteins, and nucleic acids in tissues from oxidation (loss of electrons) (Al-Mamary et al. 2002). While ROS can cause significant damage to large molecules, it is important to recognize that these free radicals are the product of essential cellular reactions. This is where antioxidants have an important role: they scavenge for overproduced ROS to maintain a balance between oxidant and antioxidant status, thereby preventing oxidative stress to cells and organs (Poljsak et al. 2013).  Bee products – nectar/honey, pollen, and propolis – contain significant amounts of antioxidants, but honey is the only bee product widely consumed by humans (Blasa et al. 2006). This article investigates two questions, namely, “Are the antioxidative properties of honey due to physical or chemical mechanisms?” and “What factors influence the antioxidative capacity of these mechanisms in different types of honey?”

Honey can be described as a complex carbohydrate solution; however, it also contains many minor constituents. These constituents include, but are not limited to, amino acids, enzymes, vitamins, and polyphenols (Saxena et al. 2010). The primary mechanism responsible for the antioxidative activity of honey is the quality of flavonoids and phenolic acids, both of which are polyphenols (Pyrzynska & Biesaga 2009). More specifically, the antioxidative capacity of honey can be attributed to the oxidation-reduction properties of these phytochemicals. Bertoncelj et al. (2007) reported a very high positive correlation (r = 0.966) between total antioxidant activity and the phenolic content of seven types of honey from Slovenia. Their finding, that phenolic content plays a significant role in antioxidant activity, was also supported by Saxena et al. (2010), who obtained similar results in their more recent study of Indian honeys.

While the antioxidative properties of honey have been widely attributed to polyphenols, amino acids have also been recognized as antioxidants. Meda et al. (2005) found that radical scavenging activity (a measure of antioxidant content) was better correlated with proline (an amino acid) content (r = 0.75) than with phenolic content (r = 0.5). Evidently, more research is required to understand the radical scavenging activity of minor honey constituents (Meda et al. 2005).

In addition to the chemical components, the physical mechanisms of honey are of interest to scientists studying the antioxidative capacity of various samples. In their study on antioxidant capacity of honey and correlated characteristics, Frankel et al. (1998) discovered a high correlation (r = 0.782) between antioxidant content and honey color. Furthermore, Frankel et al. (1998) found that over 60% of the variance in antioxidative capacity for their honey samples could be attributed to the color of honey. In more recent studies, the polyphenol concentration of honeys has been compared with the color. Blasa et al. (2006) concluded that the highest antioxidant powers and the highest levels of polyphenols were found in dark, crystallized, and opaque Italian honeys. Similarly, Bertoncelj et al. (2007) analyzed honey color and phenolic content of Slovenian honeys. They found a highly significant (r = -0.943) correlation between lightness and phenolic content, with phenolic content levels highest in dark colored honey (Bertoncelj et al. 2007). Bertoncelj et al. (2007) explained that the color itself does not contribute to the antioxidative properties of honey. Rather, color is a reflection of phenolic content, minerals, and pollen constituents. Collectively these studies make it clear that the chemical properties of polyphenols are ultimately responsible for the antioxidative properties of honey. 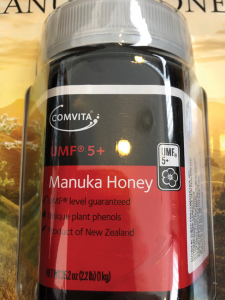 Frankel et al. (1998) also investigated botanical original as a potentially correlated characteristic, and found that the chemical activity of honey is significantly influenced by floral source. In their study, honey samples were taken from 14 different floral sources that varied 20 fold in antioxidant content. The highest concentration of antioxidant content (measured in units referred to as μeq) was found in very dark Illinois buckwheat honey (432 x 10-5 μeq), compared to the lowest antioxidant content in light colored California button sage honey (21.3 x10-5 μeq) (Frankel et al. 1998). Furthermore, the phenolic acid composition, and consequently antioxidant activity of honey, can be attributed to the plant species foraged by honey bees. For example, ellagic acid is a phenolic acid that has been used to identify heather honey, while hydroxycinnamates are specific to chestnut honey (Pyryznska & Biesaga 2009). Additionally, Bertoncelj et al. (2007) identified statistically significant (p < 0.05) differences in antioxidant activities between the types of honey sampled. Amongst their subsamples of Slovenian honey, acacia honey had the least antioxidant activity (44.8 mggallic acid/kg of honey), followed by lime, and multifloral honey. In contrast, the values for fir honey (241.4 mggallic acid/kg) and forest honey (233.9 mggallic acid/kg) were approximately five fold higher than the value for acacia honey (Bertoncelj et al. 2007). Beretta et al. (2005), who also measured gallic acid to identify the phenolic content of honey samples, obtained similar results for acacia and multifloral honey. Interestingly, Beretta et al. (2005) found that the antioxidant power of honey samples of the same botanical origin were similar, despite differences in their geographic origin. For example, their value for Mexican buckwheat honey (482.17 ± 2.40 mggalic acid/kg) was similar to the value, as reported in the literature, for California buckwheat honey (456 ± 55 mggalic acid/kg). Throughout the literature, botanical origin has been regarded as the factor that is most influential to the phytochemical composition of honeys.

This article has summarized some of the ways in which phytochemical composition contributes to the antioxidative activity of honey (Al-Mamary et al. 2002). Honeys that are dark in color are generally rich in phenolic compounds and have greater antioxidative potential. Moreover, in some cultures, dark-colored and strong tasting honeys (e.g. chestnut, buckwheat) are regarded to be of premium quality and perceived to provide health benefits. Ultimately, the potential impact of antioxidant content of honeys for human health should be explored through further research.

An earlier version of this paper was submitted in the Apiculture and Honey Bee Biology course taught by Gard W. Otis, University of Guelph.

Poljsak, B., Šuput, D., & Milisav, I. (2013). Achieving the balance between ROS and antioxidants: When to use the synthetic antioxidants. Oxidative Medicine and Cellular Longevity, 2013, 1-11.