Note: This article was written before full information was out about the Cambridge Analytica scandal . . . or at least before Cambridge Analytica closed shop.  Ethical considerations of Facebook marketing and microtargeting, in particular, will be addressed in upcoming articles.

I’ve meant to write this article for about a year now, but school and work have delayed my progress. The thing is, I would have started this article the same back then. In all likelihood, I could delay writing another year, and it would still begin in the same fashion.  “The Facebook algorithm has changed again.”

Every month, the Facebook algorithm is one of the primary discussion topics for Facebook marketers. For the less experienced, the conversation goes “this is horrible, we shouldn’t bother marketing on Facebook anymore.” Savvy marketers see changes as merely a push to hone their craft and become better at what they do, as a requirement to up their game.

I’m going to suggest you see changes through that second lens.  You may not see yourself as a savvy digital marketer, but you can be with a bit of practice. It is actually far easier than you think.  And there is only one key.

Do social marketing the way you want social done to you.

I’ve said it before, and I’ll repeat it, because it’s the number one key to advertising, running a Facebook page, selling your product, doing outreach as an organization, and even communicating with your customers in person. Most of you know this inherently when you talk with people or run your business.  And yet somehow we forget this when it comes to advertising. We think we need to be smarmy salespeople when we advertise. And yet we all hate that.

So how about we decide right here and right now to NOT be the thing we hate.

But how do you do that and still sell product, or advertise your organization?

It’s a lot easier than you think.  Better still, it is a lot CHEAPER than you think. When you do good work, when you aren’t that high-pressure salesperson, selling becomes really inexpensive. Here’s why: instead of trying to sell to every single person you come in contact with, you’re going to try to reach the people who really, REALLY want to buy your product, or, for organizations, the people who really want to join or come to your meeting.

Most of us have been sold the line that if we don’t push our products to everyone, we won’t get enough buyers to sustain our businesses. Certainly, if you are selling something almost no one wants that may well be the case.  But I’ll suggest that your local honey, your beekeeping group, or your beekeeping supplies or products are not that. There are plenty of buyers out there.

So why advertise on Facebook?  One reason really – it’s cheap.  Facebook allows you to target your market very carefully, and in doing so, you can get to the specific people you want to reach.

To do this, you’re going to have to go against some of your natural instincts. More is not better. Less is better.

So, let’s stop talking about why and let’s get to the nuts and bolts of how. This is the special sauce folks. And yes, you’re going to have to experiment to get to know your audience. But you’re going to be doing it with $10, or even $5.

There are several key components of ads. Each one needs to work for your ad to work.  Let’s talk about them.

Picture – We have talked before about the tools you can use for social media, and this is where you’re going to use these. Pull up Canva (the online tool) because you’re going to need it. Facebook prefers ads without a lot of writing in the picture. NO writing is best.  That means your image needs to “speak” for you. It needs to tell the story. Are you selling honey? Are you selling your organization? Are you selling supplies? Make the picture show some drama, make it beautiful, and make it pull someone in. Remember, this is the first thing a potential “buyer” is going to see. It needs to attract someone.

Headlines – like the title of an article or your email subject, if this doesn’t make people want to open your ad, everything else you write is useless. Are you having a sale?  Say it. Do you want to play on the loss of bees around the world and people’s interest in learning more?  Your headline should draw on that interest. Should people buy local honey to save the bees? Tell that story. You have precious few words to get someone to click. Use them wisely.

The body of the ad- well if people get here you’re doing great.  They obviously clicked on your ad.  So like a fish, you need to reel them in. Why should they actually buy from you? Does your sale end soon? What do they need to know?  When is that meeting? Where can they find your local honey? What makes you different?

Remember, you’re not trying to push to someone who doesn’t want to love you. You’re selling to people who are excited to learn more, to purchase. They’ve been waiting to hear more from you. Help them find out what they need to know.

So now you’ve created what we’d call the “creative.”

All of this is extremely important. But what is next is what sets you apart from the pack. 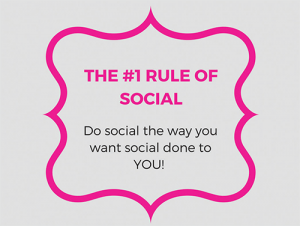 Targeting is how you decide who gets to see your ad. Many of you will be thinking EVERYONE!

No. Just no. For many reasons no.

Targeting a lot of people costs a LOT of money. Sure, big brands do it. Big brands have a lot more money than you do. Microtargeting will get you to your audience for minimal amounts of money.  Targeting a large audience will cost you thousands, tens of thousands, hundreds of thousands. You didn’t think Facebook was growing into some massive entity with tiny, inexpensive ads did you? HUGE spends from big advertisers are what pays their bills. You can do that if you want. But I’m guessing you don’t have that kind of cash. If you do, you’ve likely already hired an advertising firm, and you probably don’t need to be reading this article!

Another reason not to do it, Facebook doesn’t like it. When you target everyone, you get a lot of people who really DO NOT want to see your product. Think about a teen rock star. Some of you reading this article may want to hear about their newest release, but I’m guessing a lot of you do not want to hear about it. Targeting everyone on facebook means you would ALL see ads for it. Annoying right?

Facebook tracks how many people like your ad. It uses complex analytics to determine the quality of your ad- what those analytics are exactly, we don’t know. But if a lot of people don’t like your ad, don’t click on it, or worse yet report they don’t like it, Facebook determines that your ad has a low-quality score. And guess what happens then? One of two things.

First, the cost to deliver your ad to people goes up. In other words how much it costs to get your ad to each person on Facebook is higher if your ad doesn’t appeal to people. Second, if people REALLY hate it, they will simply stop delivering it to people period. If no one wants to see your ad and Facebook determines this, they will actually stop showing your stuff.

Now granted, if you have enough money to spend per person, getting to them not showing your ad will take a LOT longer. If you were willing to spend $1000 per person to get your ad out, I’m guessing they’d show your ad a lot longer than if your budget for advertising were considerably smaller. But nonetheless, if almost everyone genuinely hates your ad, they will essentially show it to no one.

Let’s get sidetracked a bit and answer why Facebook wouldn’t show an ad. That seems crazy, right? Unless you look at the bigger picture. And we’ve talked about this before. Facebook doesn’t exist for businesses to advertise to people. It exists to keep people connected to other people. In theory, if it could not have any advertising at all, it would likely do that. The people who signed up would be happy not to get any ads, and they wouldn’t have people complaining to them about ads.

But that isn’t how anything works. They need to make money, and yes, want to make money. So ads support the massive number of computers that run Facebook, and the large numbers of employees that keep Facebook running, and everything else that goes on behind the scenes.

So it’s a tricky balance between keeping the people who sign up for facebook happy, and the businesses who pay their bills happy. If they show too many really horrible ads to people, eventually those people may leave and go to another platform. That is, rather obviously, against Facebook’s best interests.

So Facebook has to balance the need for money and support with the need to keep people engaged on the platform by doing what it can to force people to create better ads and target their ads to people who want to see them. They don’t always do a perfect job, mainly because they can’t hold the hand of every advertiser.

However one could argue that targeted advertising is better than what we used to have – the indiscriminate advertising of everything to everyone. As a side note, google ads work in very similar ways. They, too, charge based on how well your audience likes your ad. If you’re spamming people, they make you pay more.

OK, back to why you shouldn’t target everyone . . .

Targeting everyone is rude.  EVERYONE doesn’t care about your product, class, or even bees. Yeah, maybe they should. But you advertising to them isn’t going to make that happen. You can’t force someone to like something. I’m guessing most of you don’t like being constantly advertised to on the internet.

OK, but how do you get to the people who want to see your ads?

That’s what we’re going to talk about next time. I know, it’s like a horrible sequel on TV. The good news is I’ve already written that article so you won’t have to wait too long. But the reality is that I’m going to dig into specifics, and I don’t want to gloss over the hard information you need to know to do this well.

You can learn a lot by watching others, both their failures and their successes. For the next month, watch ads to see what you can learn. Pay particular attention to your friends to see if they ever share an ad. Eventually, that’s what you want to do with your ads. You want people to share them for free!