Chicory (Cichorium intybus) is a common wayfarer that occurs over much of North America. The plant is most common in the East and Central states and along the Pacific Coast. Elsewhere, it can be somewhat scattered.

A member of the daisy family, this bee plant naturalized after being introduced to the New World during the Colonial Era. The sun loving species was originally native to North Africa, Asia Minor, and Europe.

It frequents grasslands, weedy areas, disturbed sites, meadows, lawns, waste places, fencerows, roadsides, and fields – especially stony ones. On occasion, the plant has even been known to spring up in cracks of sidewalks and pavement.

This species is most common at low elevations. It is featured in many wildflower guides although the plant isn’t a native. Chicory doesn’t appear to be quite as aggressive as some other naturalized plants. However, the seeds are spread by the wind. The roots also enable this to spread. 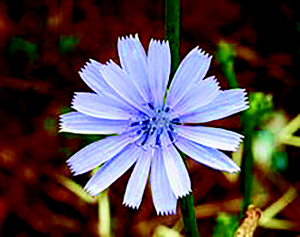 The plant goes by various other common names. These include blue sailors, blue daisy, blue endive, bunk, common chicory, blue dandelion, ragged sailors, and coffee-weed. It is sometimes called succory. Derived from Latin, this translates as “to run under” in reference to the deep roots.

The blossoms of all chicory types are eagerly worked by bees for pollen and nectar. This is listed as a major bee plant in the Northeast, the Southeast, the North Central region, the Plains, the Southwest, most of the West, and Florida. It is considered a minor bee plant in some areas of the Northwest.

One reason that chicory is a valuable bee plant is that it blooms for an extended period. Flowers are typically present from about mid-Summer into Fall, mostly from late June to October, depending on location. These blooms often appear when little else is available for the bees.

This herb produces white pollen. The nectar flow is best during rainy weather. However, it remains a reliable nectar source even during drought.

Chicory has long been recognized as a honey plant. This yellow honey can develop greenish tinges when it granulates. It has a flavor much like that of chicory-flavored coffee. 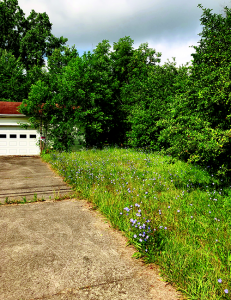 Although some might regard chicory as an invasive, the fact remains that certain types of this plant are grown for specific purposes. For that reason, I’m including details on its culture. Hardy to zone three, the common chicory is sometimes grown in herb gardens, wildflower meadows, and Biblical gardens. This is also grown as a fodder – especially for sheep.

The plant is also cultivated for the roots, which are used as a coffee flavoring or substitute. For that purpose, it is grown commercially in Germany and England.

The chicories that are most widely grown are the large-rooted varieties and those used for salads with radicchio being an example. For the most part, the latter is cultivated as a cool season annual crop since the salad-type chicories tend to bolt in hot weather. Assuming this doesn’t bolt the first year, the plants will typically survive the Winter and bear blossoms the following year.

This crop is easy to grow. As a perennial, this is best planted in early Spring or Fall since the seeds will germinate best at those times. The plant adapts to most soils that are neutral to lime rich. But, it prefers a light, evenly moist, deep, well drained, reasonably fertile soil, such as deep loams. However, the plant will grow in poor soils.

Plant chicory seeds after the date of the last expected Spring frost. As a perennial, these should be spaced about 1½ to two feet apart. Sprouting within one to three weeks, they germinate best at 65-75°F.

Cover to a depth of ¼ to ½ inch deep, depending on the soil type. For wildflower meadows, one wildflower seed catalog recommends sowing five pounds of seeds per acre. Most seed catalogs offer a wide variety of chicory seeds, including those suitable for salads, wild flower meadows, and herb gardens. Johnny’s is one source.

In addition, seeds for Magdeburgh (sometimes spelled Madgeburg) chicory, a special variety grown for the large roots that can reach a foot or more in length, is also available. These roots are dried, roasted, and ground and used primarily for coffee-like beverages. This variety features entire leaves and generally blooms the first year.

This straggly herb is occasionally a biennial, but is normally a perennial. The plant has been known to live a decade.

Reaching up to 1½ foot in length, the much branched root features small rootlets along the sides. This can be either reddish or yellow. It is slender – only an inch or so thick. Releasing a sap when broken, the root is spindle-shaped.

Chicory is a deep rooted, upright plant with spreading branches. Depending on growing conditions, it can reach three to six feet in height with a 2½ foot spread.

The hollow, stiff, reddish to green stems are covered with soft hairs or bristles. Typically grooved, angular, and cylindrical, these exude a milky sap when broken. As the plant ages, they tend to become woody. The upper portions of the plant are largely leafless.

The foliage can sometimes be quite similar to that of dandelions. However, it is easy to identify chicory by the long, stiff hairs found along the ribs on the undersides of the leaves.

With long petioles, chicory leaves taper to a point. They’re deep green and alternate. These can be unlobed to deeply lobed. The leaf size varies according to the growing conditions as well as its location on the plant.

The main leaves are the lower or basal ones. Narrowly oval, these form a rosette. They can reach three to 10 inches or so in length.

Generally lobed and toothed, the basal foliage ranges from smooth to rough and hairy. The lobes are quite deep and resemble those of dandelions in some cases. Once the flowering process begins, the lower leaves will begin to wither.

The upper or stem leaves differ greatly in comparison to the lower ones. The former typically arise later, assuming the plant’s needs for moisture and nutrients are met.

Quite reduced in size so they can resemble bracts, the stalkless, alternate, pointed, upper foliage is somewhat clasping. Although this is mostly entire, it can sometimes be sparsely toothed. The shape varies from oblong or oblong-lanceolate to lance-like.

The flowering stalk dies at the end of the season with a new one arising the following year. Up to two inches wide, the blossoms consist of fringed, strap-shaped ray flowers held well above the basal foliage. Five decorative teeth appear along the tips of the flowers.

The blooms on the lower portion of the stem tend to open earlier in the season. These are quite similar to dandelion blossoms except for the color. Chicory bears large, showy blooms that are generally sky blue to bright azure blue or blue-violet. In some varieties, they can occasionally be white or pink.

Lasting only a single day, the flowers are quickly replaced by new ones. Chicory blossoms can appear either solitary or in small, flat heads containing two to four blooms. They’re borne mostly on ridged, short, rigid, stiff, hairy, axillary flower stems. Sometimes, these can be terminal. The bracts surrounding the blossoms are sometimes covered with very tiny hairs or spines.

Chicory is so regular in its flowering habit that it is often planted in floral clock gardens. These open with the sun and close by noon on sunny, bright days. They emerge later in the morning or remain open for most of the day during cloudy weather. The flowers move in the direction of the sun.

In Germany at one time, children reportedly would pick a chicory flower and place it into an ant hill. When the ants emerge from their nest, they release formic acid as a defensive measure, thereby causing the blue flowers to turn bright red due to the change in pH.

The Many Uses of Chicory

In addition to its role as a bee plant, this species has many culinary and non-culinary uses. Chicory is a source of Vitamin A, B, and C. The leaves and roots have been used for medicinal purposes since ancient times.

Both the leaves and roots are edible. The former, which are eaten raw and cooked, are slightly more bitter than that of endive. The young foliage is preferred as this is generally milder flavored. The dried leaves are made into a tea.

Livestock also eat chicory. However, if milk cows consume very large quantities, the butter and milk can sometimes have a bitter taste. The leaves can be mixed into horse feed. Goldfinches are particularly fond of chicory seeds.

Chicory roots can be ground and used as a flour. Chewing gum has been made from the milky sap extracted from the root. The plant has even been served as a dye.

This has been used as a food plant since ancient times. The ancient Greeks, Romans, and Egyptians consumed the leaves in salads and as a vegetable.

Pliny the Elder, a Roman writer and naturalist, wrote about the plant’s many uses.  He described how Romans blanched and forced the plant. Apicius, the Roman gourmand and author of a Roman cookbook, included a recipe for chicory served with a sauce.

Historically, the leaves have traditionally been used as one of the bitter herbs that accompany the pascal lamb. It is mentioned in the Bible for that purpose.  The earliest record of chicory’s cultivation in Europe was in the 13th century.

John Parkinson, author of “A Garden of Pleasant Flowers,” which was published in 1629, recommended the plant for kitchen gardens. He described chicory as having many deeply lobed narrow leaves. Charles Dickens wrote about the cultivation of the plant in the 19th century.

One of the first mentions of chicory in the American colonies was in 1631. Chicory seed was on the list of seeds shipped to John Winthrop Jr. on July 26th of that year. The early colonists grew this mainly as a fodder or hay for their farm animals, including horses, cows, and sheep. Chicory was also planted by Thomas Jefferson and Governor James Bowdoin in Massachusetts for animals.

At one time in our nation’s history, merchants were routinely adding such large quantities of chicory root to coffee that consumers began to complain. As a result, coffee dealers were later required to list the percentage of chicory on their coffee packages. During World War II when coffee became quite scarce, Americans drank coffee-like chicory drinks.

Sometimes called escarole, endive (Cichorium endivia) is a related species that looks quite similar to chicory in many respects. This is also a good bee plant. It yields much nectar and pollen. Bees are fond of endive blossoms.

Depending on the weather and climate, endive can be either an annual or biennial. Typically, this survives the Winter and blooms the second year. Like chicory, this can also be grown as a salad green.

The endive plant is almost identical to chicory except for the leaves being almost smooth with slightly more shallow lobes on the basal foliage. The upper leaves are somewhat clasping, and range from oval to lance-like.

The flower stem of endive is markedly swollen below the base of the blossom. Endive flower heads largely resemble those of chicory, and open at the same time. Either blue to purple, these appear along the length of the stems.

Hardy to zone three, endive is tolerant of frost. It has a tendency to bolt during extremely hot weather. Suitable for most any soils, this prefers an evenly moist soil with a pH of 5.8 to 7.0. It needs full sun.

Endive was eaten by the Greeks and Egyptians by around 200 B.C. and later by the Romans. It was mentioned in the writings of Pliny the Elder, Columella, and Ovid.

Connie Krochmal is a plant expert, author and beekeeper living in Louisville, Kentucky.