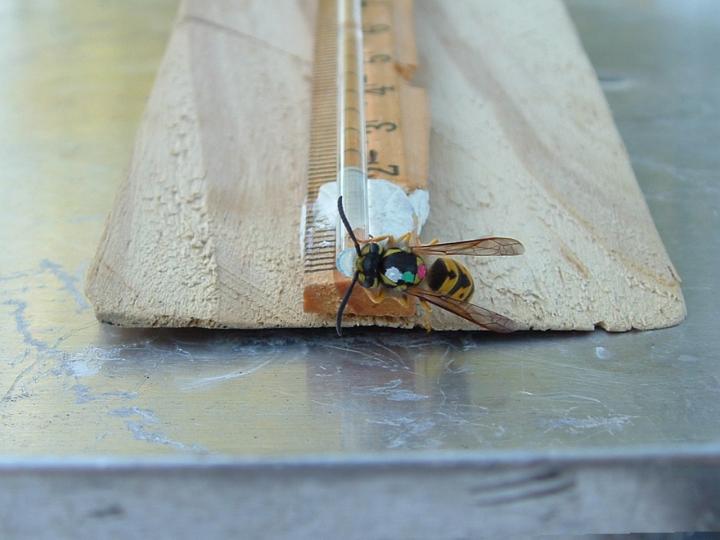 This is a German yellow jacket wasp feeding from an artificial feeder during an experiment. The dots on the thorax are from paint pens used to mark them for individual identification.

LONG ISLAND CITY, NY–Have you ever had to shout to call your family to the dinner table?

Or watched an old movie where a cook would ring a bell to let the cowboys know it was dinner time?

Turns out that humans aren’t the only creatures that need to find creative ways to tell their loved ones and comrades about a meal on the table.

Benjamin Taylor, PhD, assistant professor of biology in the Department of Natural Sciences at LaGuardia Community College/CUNY, co-led research that found that wasps have their own way of communicating to each other about mealtime.

Professor Taylor and his colleagues studied a behavior exhibited by the wasps called gastral drumming. When workers produce the behavior, they drum their gaster (or abdomen) against different parts of the nest in a rhythmic fashion, producing distinct sounds.

“For nearly five decades, researchers thought the gastral drumming was a signal of hunger. My team and I showed that they’re actually informing each other through this behavior that there’s good food nearby, and other workers should be activated to go out and search for it,” said Professor Taylor. “Our findings are really exciting because they provide the first evidence that wasps have complex communication about food, just as ants, bees, termites, and other social insects.”

In the social insect world, the drumming behavior shown by wasps in this study is known as ‘recruitment.’

“There are some really famous examples of recruitment in other social insect groups–but foraging in social wasps was never thought to involve complex communication,” said Professor Taylor. Examples include ants producing pheromone trails–resulting in lines of ants following each other to and from their nest. “Also, the honey bee waggle dance is one of the most iconic forms of communication found in any organism, and that includes social insects or otherwise,” said Professor Taylor.

The study, published in The Science of Nature focuses on a species of wasp called the German yellowjacket. These are yellow and black striped wasps.

“These wasps often show up at picnics, ballgames–anywhere food can be found. German yellowjackets are notorious for aggressively defending their nests,” said Professor Taylor. “Anyone who has stepped on one won’t soon forget it. I suspect that most people who say they were stung by a bee were actually stung by one of these wasps. But I don’t want to make them sound like ruthless monsters. When they sting, it’s most often to defend themselves or the other members of the colony.”

“German yellow jacket wasps are vital components of ecosystems and are often overlooked as pollinators for plants. Many wasp researchers have been trying to get others to reassess their importance in this regard (e.g. https://www.independent.co.uk/environment/in-defence-of-wasps-why-squashing-them-comes-with-a-sting-in-the-tale-a7144306.html). There’s also a hashtag used on social media (#wasplove), to try to get people to understand their importance.”

Professor Taylor and his students are currently testing additional hypotheses for the function of the gastral drumming. Because of the significant variation in how the wasps produce the behavior, they’re examining whether this variation conveys the quality of the food, in addition to the fact that there’s food available.

“There’s a lot that we can learn from social insects. For one, they’re known for being incredibly efficient, so much so that shipping companies utilize models which have been derived from foraging ants to try and ship their goods as efficiently as they possibly can. So, if your package arrives faster, you probably have a social insect to thank for that,” said Professor Taylor.