STARKVILLE, Miss. “My top three reasons for honey bee colony death are Varroa mites, Varroa mites and Varroa mites,” said Mississippi State University Apiculture Extension Specialist and Bee Culture contributor Dr. Jeff Harris. “This is my sarcastic response to the heavy emphasis in the press on the effects of insecticides and other pesticides on honey bees. 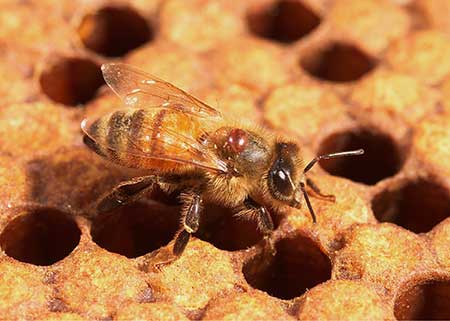 Varroa mites — such as this one attached to a honeybee — transmit viruses, weaken bee health and factor prominently in the decline of bee populations.

“Please don’t misunderstand me. Insecticides and other pesticides kill honey bees, either acutely by direct exposure to the chemicals or as part of a group of stressors that kills honey bees,” he said.

But, Harris said, there is no conclusive link between insecticide or pesticide use and the widespread deaths of honey bee colonies that have been occurring in the U.S., Canada and parts of Europe.

“What is lost by an oversimplified view of colony health is that honey bees suffer from myriad parasites, diseases and other stressors that are more commonly associated with the death of the colony,” he said. “Most scientists studying honey bees would rank Varroa mites and the viruses they vector to honey bees as, hands down, the number one killer of honey bees in the world. Most non-beekeeper members of the public have never heard of Varroa mites. Even some new beekeepers don’t know what they are.”

Varroa mites are external parasites that lay eggs in the brood cells within the hive and emerge attached to the host when the bee hatches out of its cell.

“Imagine a tick the size of a basketball attached to your neck,” Harris said. “Varroa mites attach to honey bees and suck their hemolymph, which is similar to blood in humans.”

“Varroa mites reproduce rapidly and reduce the health of the colony to the point the colonies fail, or collapse,” Harris said. “We have found colonies with ample stores of honey and either no bees or a handful of bees left in the hive. As scientists, we had no doubt: high mite populations vector high levels of viruses to honey bees that will ultimately kill the colony.”

Beginning in 2006, when episodes of high colony mortality were first reported, millions of dollars have been spent on research into the causes of what became known as Colony Collapse Disorder.

“Scientists came to the conclusion that multiple factors cause these unusually high death rates of bee colonies in some commercial operations,” Harris said. “It also became apparent that different sets of stressors cause losses for different beekeepers.”

Some beekeepers lost colonies because of a combination of inadequate nutrition related to periods of agricultural drought, stress related to honey bee transportation, and parasitism by Varroa mites.

“Although insecticides were acknowledged as contributing to the demise of bee colonies, in most of the key studies into the causes of Colony Collapse Disorder, scientists emphasized the factors causing the most significant problems for honey bees were Varroa mites and the viruses they transmit to honey bees,” he said.

At first, the primary method for treating Varroa mites was insecticide, but some mite populations became genetically resistant to the insecticides. Other treatment options with limited effectiveness involve mechanical methods, such as drone-brood trapping or freezing, or natural methods, such as dusting colonies with powdered sugar to increase the bees’ grooming behaviors, which results in mite removal.

“One extremely bright glimmer of hope in the battle against Varroa mites is the selective breeding of lines of honey bees that exhibit strong mite resistance,” said Audrey Sheridan, entomology research and Extension associate with the Mississippi Agricultural and Forestry Experiment Station. Sheridan said Harris has brought to MSU his extensive bee breeding experience from his former employment at the U.S. Department of Agriculture Bee Lab in Baton Rouge

Beginning in 1997, Harris and his USDA colleagues selected for bees that have a trait termed Varroa Sensitive Hygiene. Bees with the trait can detect Varroa mites in the combs of their nests, and they remove the bee pupae infested by the mites.

“Jeff is working to improve stocks of VSH bees specifically for Mississippi’s beekeeping environment,” she said. “The big take-home message from scientific research is that our biggest single health issue in beekeeping can be mitigated by using stocks of bees bred for resistance to a parasite.

“We just need to get people to try and use these important lines of bees and do what they can as beekeepers to keep mite populations under control,” she said.