By: Andrew Lyle – University of Alberta 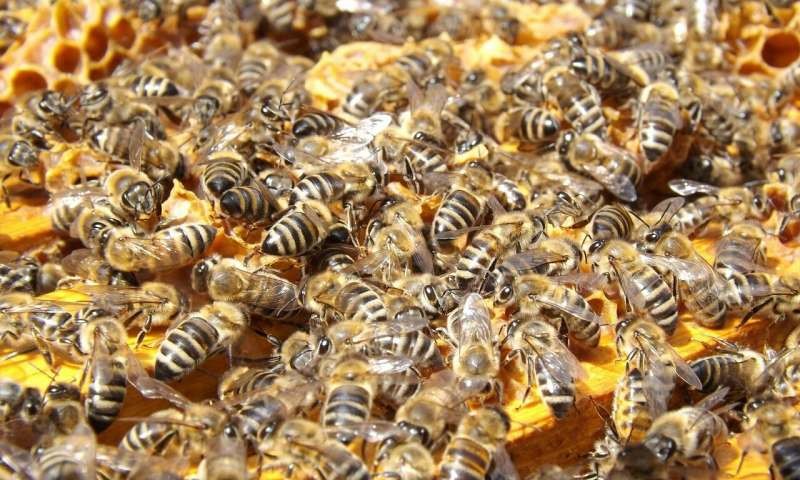 A team of University of Alberta students are hoping to market a probiotic they created to help honeybees ward off a fungal infection that has wiped out entire hives.

Beekeepers can feed the product to their hives to help eliminate the fungus in the bees’ digestive systems.

The students created the product as a project for the 2018 International Genetically Engineered Machine (iGEM) Competition that took place in Boston last October, where they won first prize and a gold medal in the food and nutrition category.

A month after the competition, the team presented their research at the annual conference of the Alberta Beekeeping Commission.
“It allowed us to expose our work to commercial beekeepers and to bee researchers who might be able to pursue further development,” said science student and team member Julia Heaton. “We’ve had interest in our project from some of these beekeepers, as well as from beekeepers who saw our research in the media.

“We have commercial beekeepers who are willing to conduct the necessary field trials to allow commercialization of our project. We’ve also looked into patenting our system with the help of TEC Edmonton.”
Honeybees in cold climates are even more vulnerable to the fungus that infects their digestive systems—a problem of particular concern in Alberta, which produced more than 40 per cent of Canada’s honey in 2016, worth more than $60 million.

The only existing treatment for Nosema ceranae is a fungicide called fumagillin, but it has been discontinued, making the problem even more critical.
“Bees have been a really hot topic lately, but although a lot of people know that bees are in trouble, not a lot of people understand why,” said Heaton.
“We also wanted to raise awareness of a problem that deeply affects our province and our communities, but not many people know about,” added Anna Kim, a team member studying biology and psychology.
Under the supervision of mentors, more than 300 university teams are tasked with using genetic components to create biological solutions to real-world problems.

“Very often in science, we first find ‘solutions’ and then we go looking for a problem,” said U of A chemistry professor Robert Campbell, who mentored the student team for the competition in which more than 300 university teams are tasked with using genetic components to create biological solutions to real-world problems.

“It is so important to identify a problem first and then find the best solution, no matter where that leads you. This team identified the problem of Nosema infections in honeybees and was inspired to conceive of an original, feasible and practical solution.t