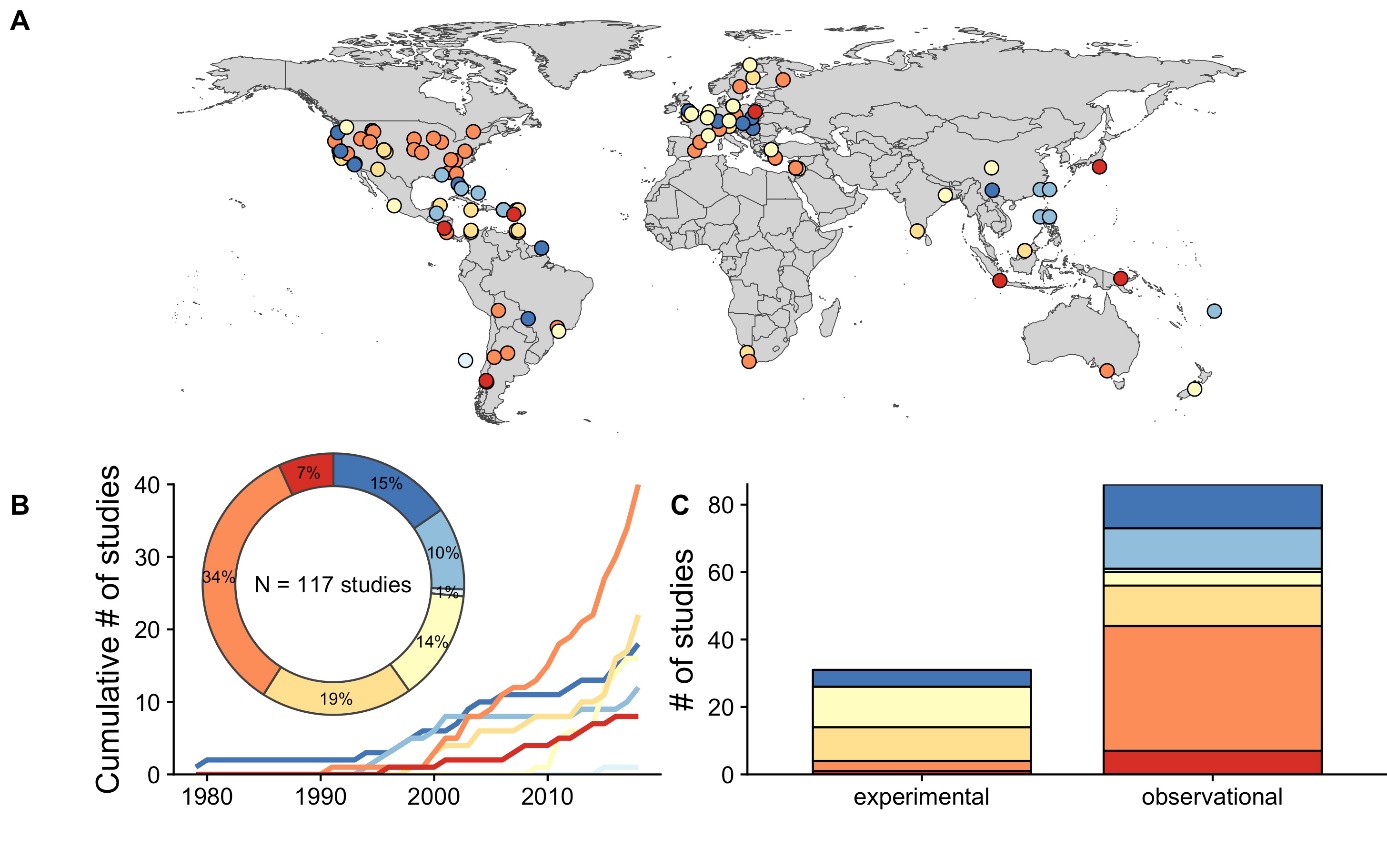 Global map of the 117 studies reviewed.

Their paper, “Natural Hazard Threats to Pollinators and Pollination,” published in the journal Global Change Biology, sounds the alarm to scientists and policy makers to place the impacts of natural hazards at the center of future research in order to emphasize conservation and reduce disaster risks.

Previous research on threats to pollinators primarily focuses on direct human impacts, but scientific knowledge of natural hazard impacts has not been synthesized yet, they said.

“The frequency and intensity of many natural hazards, such as floods and storms, are set to increase under climate change, so bringing together the evidence of these impacts is really timely,” said Nicholson, who joined the Neal Williams lab, UC Davis Department of Entomology and Nematology, earlier this year.

In reviewing the 117 studies, published in 68 different journals dating from 1979 to 2018 and encompassing 45 countries, the authors identified patterns of mainly negative impacts to pollinators and pollination from flooding, drought, and extreme heat. The effects of hurricanes, but especially fire, revealed mixed outcomes “with meta-analysis revealing mainly beneficial effects for bee abundance and species richness,” said Nicholson.

“Research was not evenly distributed across pollinator groups, with many impacts recorded for bees, Lepidoptera, flies. wasps, birds, beetles, and bats,” they wrote. “Studies tended to report impacts to pollinators in terms of abundance (41 percent of responses), species richness (19 percent), and various population-level effects (19 percent), whereas impacts to plants were measured in terms of reproductive success (39 percent), floral traits (27 percent), and species richness (11 percent).”

Scrutinizing the scientific literature involved “poring over many accounts of the powerful destructive force of nature, but also searching for some pretty unexpected hazards such as solar flares, or the Earth’s electromagnetic effect on pollinators,” Nicholson said.

The work also highlights disparities in the burden of evidence. Said Egan: “We see that this type of pollination research is strongly biased toward economically developed regions, whereas it is smallholder farmers and developing countries that will bear the largest impacts. Their existing vulnerabilities and dependence on crop pollinators tend to be higher.”

Nicholson and Egan identified several future research priorities, including the need to understand impacts to yields through impacted pollination services and to better characterize and contextualise the nature of exposure to natural hazards.

“Taken together, our findings show that the response of pollinators and pollination to natural hazards depends on the type of disturbance and level of biological organization observed and that different pollinator taxa can respond very differently to the same hazard,” they wrote.

Nicholson holds a doctorate in natural resources (2018) from UVM. Egan received his doctorate in plant animal interactions from Trinity College Dublin in Ireland in 2015. 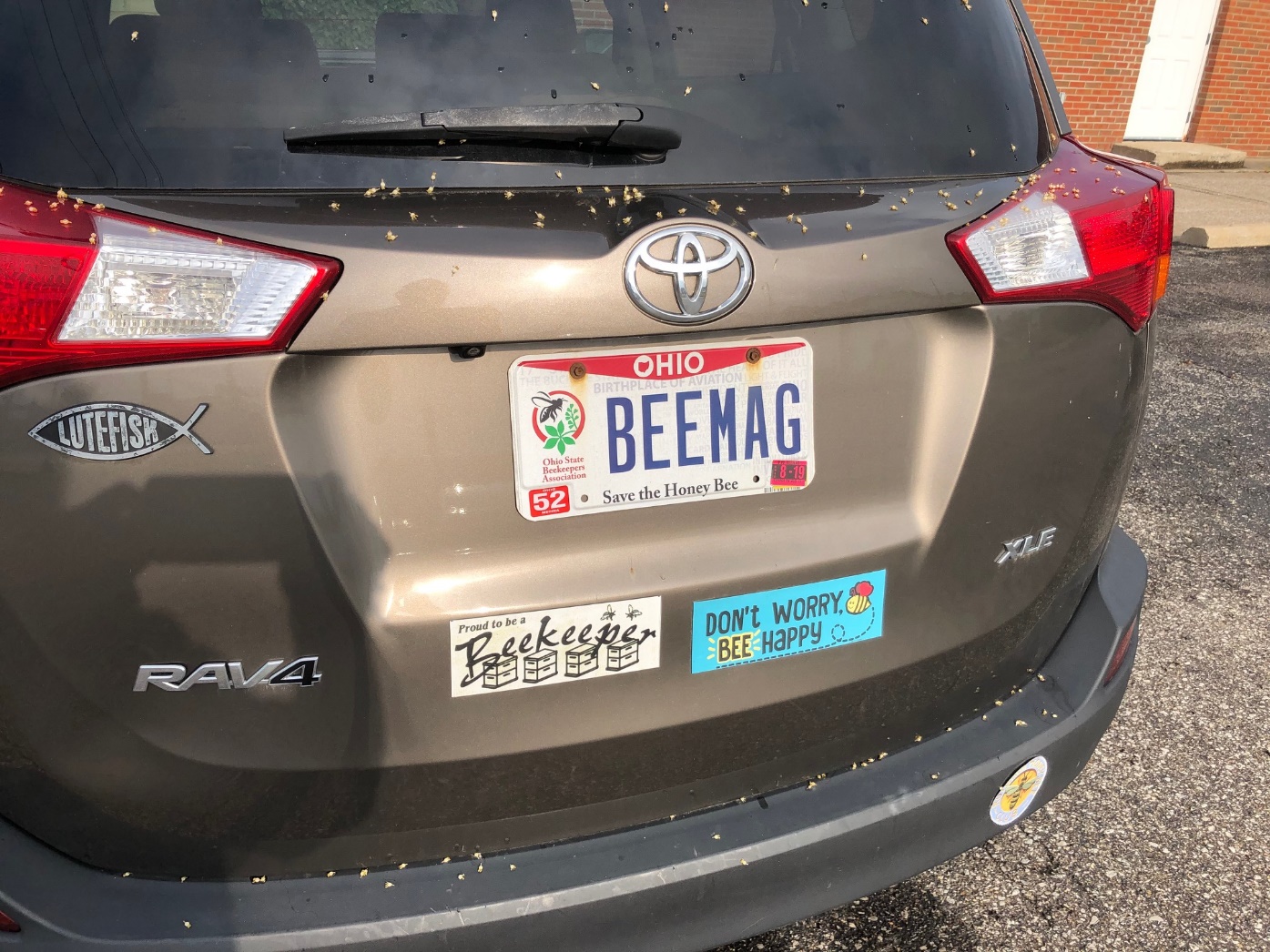