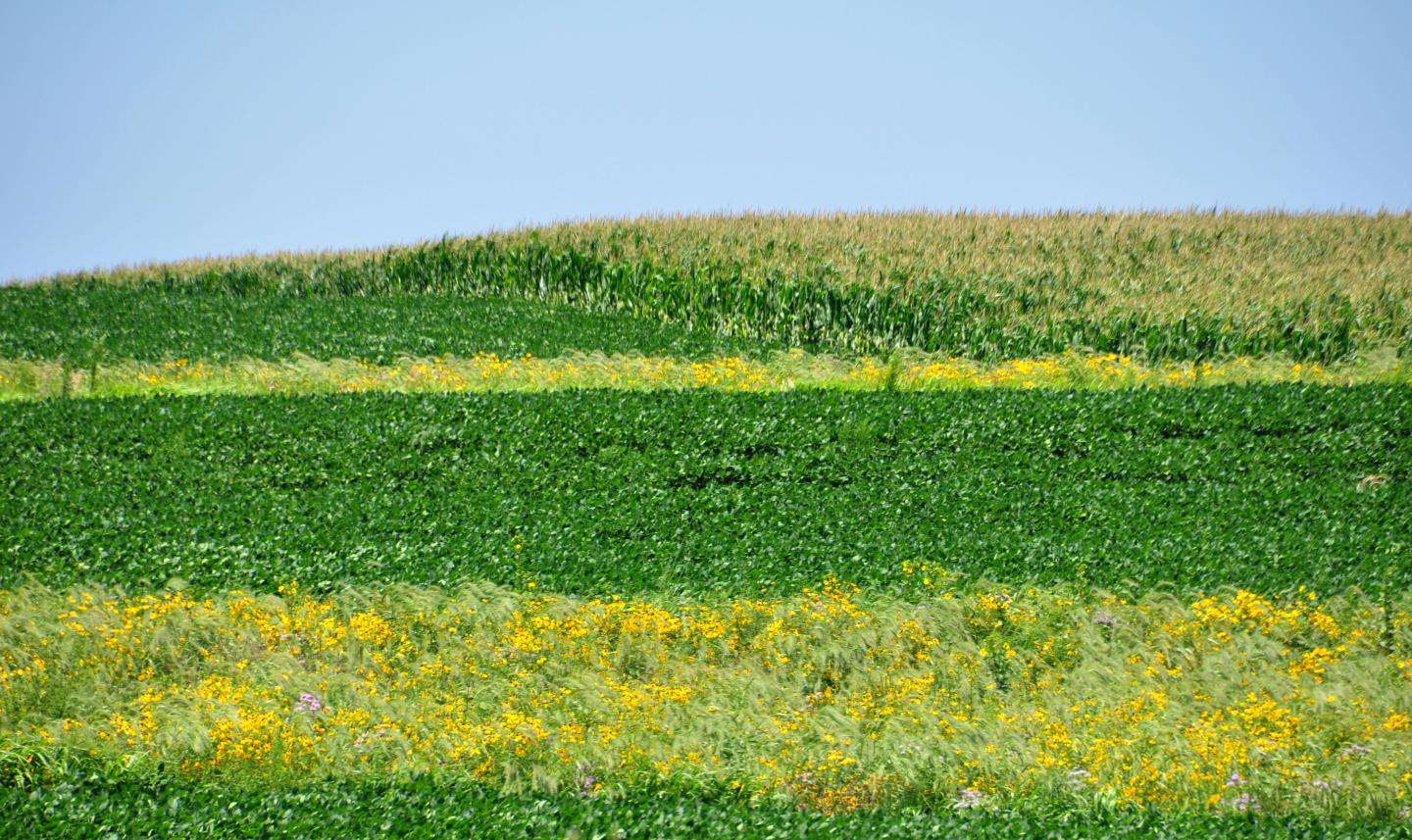 Prairie Strips Are Composed of Native Perennial Plants and Located Across Hillslopes.

Modern agriculture’s large monoculture fields grow a lot of corn and soybeans, planted annually. The outputs from row crops can be measured both in dollars paid in the market and also in non-market costs, known as externalities. Soil, nutrients, groundwater, pollinators, wildlife diversity, and habitat (among other things) can be lost when crop yields are maximized.

Now it appears that prairie strips have an extraordinary power to change this pattern.

A prairie strip is much what it sounds like: a strip of diverse herbaceous vegetation running through a farm’s rowcrops. In the American Midwest, chances are the soil that now supports crops was once covered in prairie before cultivation. Prairie plants are a mixture of native grasses, wildflowers, and other stiff-stemmed plants. They have deep roots that draw water and nutrients from far below the surface. They are perennials, returning to grow each spring.

“Research shows that areas of native prairie planted in the right places in a farm field can provide benefits that far outweigh losses from converting a small portion of a crop field to prairie,” said Lisa Schulte Moore of Iowa State University. “For example, when we work with farmers to site prairie strips on areas that were not profitable to farm, we can lower their financial costs while creating a wide variety of benefits.”

Schulte Moore is a team member with STRIPS: Science-based Trials of Rowcrops Integrated with Prairie Strips. STRIPS showed that converting just 10% of a row-cropped field to prairie strips:

It also leads to greater abundance and diversity of beneficial insects, pollinators such as bees and monarch butterflies, and birds. Going from zero to 10% prairie provided far more than a 10% increase in the measured benefits.

“Some of these benefits can impact our pocketbooks but are not accounted for by typical financial markets,” said Schulte Moore. These include ecological benefits such as flood control, cleaner water, and carbon from the atmosphere stored.

The STRIPS research began in Iowa in 2007. Because of promising scientific results, five years later the researchers began working with farmers to introduce prairie strips onto commercial farms. While the research results have been more variable in these more complicated settings, the findings are encouraging and cooperating farmers are liking what they see.

The plantings require a modest investment in site preparation and seed planting. Maintenance tasks include some mowing in the establishment years and spot treatment for weeds. So far, the researchers have not seen competition between the prairie plants and crops that impact yield.

Conservation Reserve Program (CRP) contracts through the USDA’s Farm Service Agency can greatly reduce the cost of establishing prairie strips. Overall, Schulte Moore said, this is one of the most economical best-practice conservation steps farmers can take.

Still, lack of stable financial rewards for establishing and maintaining prairie strips is a barrier to widespread adoption. “Finding ways to return economic value to farmers and farmland owners is crucial,” Schulte Moore said. She is now focused on developing marketable products from prairie strips, such as renewable energy sources from prairie biomass. That would help make what is already a solid investment into a can’t-lose proposition.