Can You ‘Bee’lieve It? Bees Active Year Round!
By: Desiree Bergstrom

Harsh Winters Can Be Detrimental To Bee Colonies Used To Pollinate. 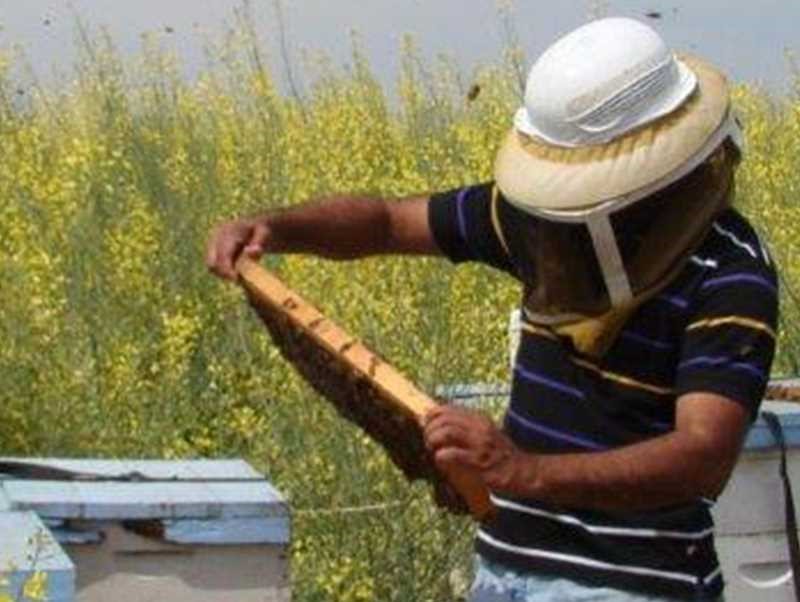 PHOTO COURTESY OF OSU EXTENSION – Honeybees are active year round, but making it through harsh winters can be a struggle. The amount of bees that die over a winter can have an impact on area seed crops that rely on them for pollination.

It may “bee” a strange time of year to talk about bees, considering that the hives often seen in seed crop fields have been removed for the winter, but low temperatures and harsh winters make a big impact on honeybee populations in the area.

With an estimated 900 species of bees in Oregon, there are really only three or four that are managed — including two in Central Oregon, used for seed crops, the alfalfa leafcutting bee and the honeybee.

According to Andondy Melathopolus, an associate professor at Oregon State University specializing in pollinators, of the two bees used for agricultural production in the Central Oregon area, the leafcutting bee has the more typical life cycle and has an easier time surviving the winter.

Basically what happens is the bees, which are imported and essentially came to the U.S. along with alfalfa, emerge for about six weeks while the alfalfa is in bloom and pollinate the plants. These bees don’t make honey.

While their nests are in the same area, since they are being managed for pollination, the bees don’t live in a colony, and they don’t have a queen bee. Instead, Melathopolus describes it as an apartment block of straw-like tunnels where a whole bunch of bees live in the same space but are doing their own thing. They make nests like a cocoon out of pieces of alfalfa leaves in the tunnels, storing food there while they are active in the summer, Melathopolus said.

He said the leafcutting bees do the best job pollinating the alfalfa plants. To do that, the bee has to stick its head down inside of the plant, and then it gets hit on the head with the pollen. The problem with using honey bees is they don’t like to get hit on the head with the pollen, so they start to steal it out of the side but don’t pollinate the plant, Melathopolus said.

After the leafcutters pollinate and store food, they return to their nest and reproduce, Melathopolus said. They make about 12 babies, and then the mature bee dies. The young bees eat the food store the mature bee gathered through the season, and then they go to sleep for six to eight months. So while they live about a full year, the bees are really only fully active for six weeks or so, Melathopolus said.

When they are dormant in the winter, the nests are generally kept in a controlled area.

While the leafcutting bees may have the more typical life cycle, they are not in the majority when it comes to the bulk of pollinators for seed crops in the region.

Alfalfa seed only accounts for a portion of seed crop production in Central Oregon, and the bulk of seed crops, specifically “all that carrot seed,” said Melathopolus, rely on the honeybee to pollinate.

That is where winters get tricky.

Unlike the leafcutters, the honeybees are active all year — they don’t go to sleep in the winter.

Here’s how it works.

Within a hive of honeybees, the typical large wooden box hives you see in the middle of fields around here as you drive by in the summers, is a queen bee and thousands of worker bees.

Melathopolus said when it gets cold like it has been the last few weeks, the bees congregate into a tight huddle inside the hive, where the queen is in the middle and able to move about, but the outer layer of bees in the huddle acts similarly to feathers on a bird. It protects the inner part of the group and traps heat, with very little room between them.

It’s during this time that the bees live off of the honey they produce all summer long.

“The only reason they make honey is so they can get through the winter,”Melatopolus said. It takes energy for the bees to form the huddle, and they have to get that from somewhere. It is similar to a person who grows food in their garden, harvests it and preserves it for the winter — the honey is the bees’ preserves.

“All summer long they are canning,” said Melathopolus, chuckling.
The bees spend their time and energy trying to stay warm through the winter, but he said winter is a vulnerable time for honeybees, and it can be tough on beekeepers.

Basically, the beekeepers are playing a waiting game until January or February to see how many colonies make it through the winter, he said.

About two years ago it was a pretty heavy loss, and growers were concerned about having enough bees for pollination, Melathopolus said.

It takes a lot of bees to get all of the seed crops in the area pollinated. According to Martin from Central Oregon Seed, about 15,000 hives are brought into the area just for the crops under contract with them.

Martin said that the company wouldn’t even get 25% of crop yield without this hybrid method, not to mention the better quality of the end product. He said hybrid seed creates a better tasting, more consistent carrot when it is planted later. The essential piece of the puzzle to get that better end product is the bees.

They bring the hives in late June, said Martin, and place them in predetermined places for best pollination. The hives are present for about four to six weeks, and then they arrange to get them off the fields as soon as they can.

Though the hives come off the fields when they are no longer needed and don’t return until the following year, the beekeeper is tasked with keeping the honeybees alive through the winter.

“Oregon keepers are some of the best keepers in the world,” said Melathopolus, adding that 80% of their income comes from pollination.

“What is important is making sure their colonies are good, strong and ready for pollination,” he said. “If we have a bad winter, it can throw a lot of things off kilter for a lot of different crops in the state.”

Because the winter is a crucial time for honeybees, the industry is looking for new ways of wintering bees and keeping colony loss rates at a minimum.

“Some of the bees that are coming to Madras … beekeepers are starting to winter them in potato sheds in Idaho,”Melathopolus said, mentioning it’s a pretty new thing, but it “might help in the future in kind of stabilizing those winter losses.”