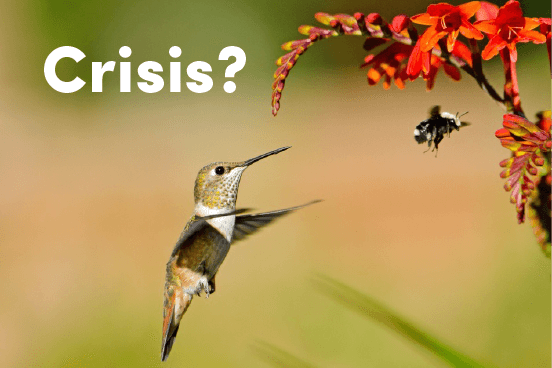 Parents have been teaching their children about ‘the birds and the bees’, with varying degrees of awkwardness, since time began. Considering the Earth’s growing population, they’ve gotten it right.

Over the past two months, many in the media and the science community have been spinning a new ‘birds and bees’ story: they are deathly threatened by crop protection chemicals. Like the original, it’s an awkward story, but in a different kind of way, because, for the most part, it’s embarrassingly wrong.

Let’s talk about the bees first. Going back more than a decade now, there have been literally thousands of reports, amplified by the media, claiming that honeybees are in danger of extinction due to the use of crop pesticides (here, here, here). The reason? Reports based on mostly small-scale laboratory studies finger a primary culprit: One class of insecticides, neonicotinoids.

CATCH THE BUZZ-Farmers Get 12.1 Cents of a Dollar on What You Spent on Thanksgiving Meal

“As we gather around the Thanksgiving dinner table this year, we should take time to recognize and thank the family farmers and ranchers who provide our Thanksgiving meals,” said NFU President Roger Johnson. “While consumer holiday food costs continue to decline, incomes for American farm and ranch families are have dropped dramatically over the past seven years. We’re in the midst of the worst farm economic downturn in generations, and we’re hopeful the Farmer’s Share can help illustrate that fact to the general public.”

On average, farmers receive 14.6 cents of every food dollar consumers spend throughout the year, while more than 85 percent of food costs cover marketing, processing, wholesaling, distribution and retailing. As the Thanksgiving Farmer’s Share illustrates, the farmer’s share is even lower for Thanksgiving food items.

Wheat farmers averaged a meager $0.03 on 12 dinner rolls that retail for $2.69. Dairy producers received only $1.66 from a $4.59 gallon of milk. And turkey growers, who raise the staple Thanksgiving dish, received just $0.06 per pound retailing at $1.49. Johnson says that $0.06 figure—while striking on its own—is particularly egregious when considering the fact that poultry integrators received $0.62 per pound.

“The major integrators who control the poultry markets have used their extreme bargaining power to suppress the earnings of the men and women who raise our chickens and turkeys while simultaneously taking in record profits for themselves,” Johnson said. “While poultry growers take all the risk of production, they are receiving just 5 to 6 cents per pound for turkeys and chickens. The integrators take those same turkeys and chickens, process them, and then mark up the retail value tenfold.”

Thanksgiving presents an opportunity to raise awareness about food production, including misconceptions about food costs, Johnson explained. “Farmers and ranchers play the most valuable role in actually producing the food that is served at holiday dinners, yet they make just pennies on the dollar for their products. The farmer’s share of the retail food dollar continues its gradual decline from year-to-year as food companies take in record profits and family farmers sell their farms. This is certainly not what the consumer wants, but it is what is happening behind the scenes of their Thanksgiving holiday.”

Johnson urged consumers to take notice of what is happening in the food system and supporting policies that benefit family farmers and ranchers. Those interested can learn more at NFU.org, and keep in touch with Farmers Union by signing up for NFU communications here.

The Farmers’ Share is based on calculations derived from the monthly Agriculture Prices report produced by the U.S. Department of Agriculture’s National Agricultural Statistics Service and price points of common grocery food items at Safeway supermarket. The farmer’s share of retail turkey sales is reported by the Contract Poultry Growers Association of the Virginias, as national data on farm prices for turkey does not reflect the amount turkey growers receive.

The Thanksgiving Farmers’ Share can be viewed and downloaded here.