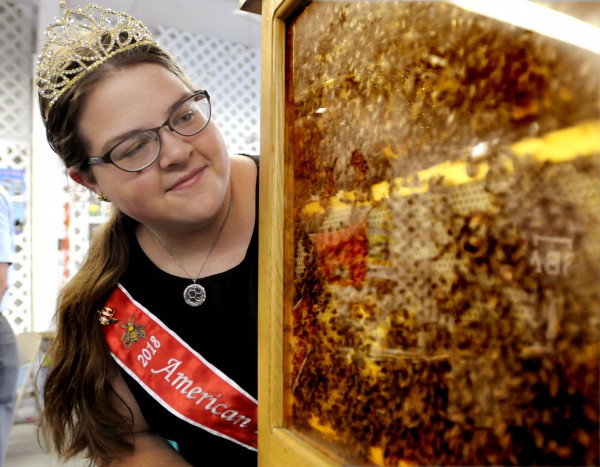 American Honey Queen for 2018 Kayla Fusselman showing a live honeybee hive on display at the Agriculture building at the Delaware State Fair. Visitors to the fair can safely see bees working to produce honey. (Special to the Delaware State News/Gary Emeigh)

The 2018 American Honey Queen was ready to start a conversation about honey and bees with anyone with a few minutes to spare.

She’s passionate about bees and is spending the year extolling their virtues.

Ms. Fusselman will serve as a national voice for the American Beekeeping Federation until the next annual convention in January.

“I’m sad that it’s only a year and I will hate to give it up at the federation’s next meeting, but I’m really trying to take advantage of my time by meeting as many new beekeepers as I can, honey makers and those people who might not know much about what bees and honey are all about.

“I’ve found that once people hear a little bit about how bees and how interesting they are in many ways, the begin asking more and more questions.”

“The fair here is awesome and you can see that Delaware really, truly is an agricultural state,” she said. “I’ve already had several people come up to me and say, ‘Every year we come and find you,’ which is awesome because it says a lot about their dedication and devotion to everything involving bees and honey.”

After joining her local Future Farmers of America branch in high school Ms. Fusselman gradually drifted toward extra interest in bees and honey and eventually gained the Pennsylvania Honey Queen title before ascending to a spokeswoman of national scope.

“I was aware of the basics of there being three types of bees and how they pollinate, but learning the real science and detailed facts that make people go ‘Wow’ was a long process that involved meeting with beekeepers and educators, reading books and literature and doing all that I could to learn as much as I could,” she said.

Honey bees do more than sting, the American Honey Queen said, enthusiastically pointing to pollination’s value to so many things.

“They are overlooked and most people don’t realize how important they are in so many days that affect everyday lives,” she said. “They play such a big role in the cotton in your shirt, the milk in your cereal, the fruit in your salad. They’re all a product of pollination and once people realize that bees are big part of that they begin to take them more seriously.”

“Nobody realizes that when they bite into a pickle that a bee might have made that possible,” Ms. McConnell said.

The American Honey Queen marched in the state fair parade on opening weekend and “drew a lot of attention,” according to Ms. McConnell.

“You can especially see it in the eyes of little girls who maybe wouldn’t bee interested in bees but light up when they see her as a queen and maybe stick around and listen,” Ms. McConnell said.

The observation hive in the Department of Agriculture’s building drew curious onlookers as a queen bee navigated through the workers and drones.

“For a lot of people at the fair it is the first time to see a queen up close or a beehive and it may be the only opportunity they have to do it,” Ms. McConnell.

Alan Harman Romania becomes the largest honey producer in the European Union with output rising to 35,000 tons last year up 75% from 20,000…