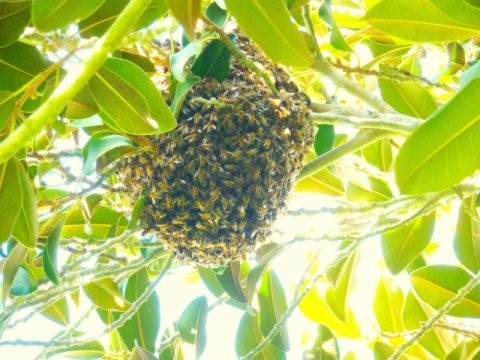 Hike around the natural habitats of San Diego County and it becomes abundantly clear that honey bees, foreign to the area, are everywhere. In a study published last year, researchers at the University of California San Diego found that honey bees are the most widespread and abundant pollinators of wild plants in the world, with the San Diego region having exceptionally high honey bee visitation on native plants — roughly three-quarters of all observed pollinators.

New research from the same team found that honey bees focus their foraging on the most abundantly flowering native plant species, where they often account for more than 90 percent of pollinators observed visiting flowers.

The new study by Keng-Lou James Hung, Jennifer Kingston, Adrienne Lee, David Holway and Joshua Kohn of UC San Diego’s Division of Biological Sciences is published on Feb. 20 in Proceedings of the Royal Society B.

“To have a non-native species that removes the lion’s share of pollen and nectar in a diverse ecosystem such as ours is stunning” said Kohn, a professor in the Section of Ecology, Behavior and Evolution. “Think about if we had an invasive plant that covered 75 percent of the region’s land area — it’s similar to that level.”

The honey bees’ monopoly over the most abundantly blooming plant species may strongly affect the ecology and evolution of species that are foundational to the stability of the region’s plant-pollinator interactions, the researchers said.

“It’s concerning enough that a non-native species reaches an overall 75 percent numerical dominance — what’s more, we now show that their numerical dominance is even higher on the plant species that supply the largest amounts of pollen and nectar,” said Hung, a former student of Holway and Kohn who is now a postdoctoral researcher at The Ohio State University. “This finding suggests that honey bees are disproportionately removing resources from the plant species that likely support the greatest diversity and abundance of native pollinator species.”

From an ecological perspective, the new assessment could help habitat and wildlife management evaluate pollination services and native pollinator conservation in natural areas where non-native honey bees have become established.

“Our study is a first step in figuring out which plant and pollinator species may be most susceptible to interference from honey bees,” said Hung. “This is also a great example of the importance of understanding the natural history of a non-native species when we attempt to evaluate its ecological impacts — both positive and negative.”

Native to Europe, the Middle East and Africa, honey bees were introduced to North America in the 1600s. They spread in California after the state’s gold rush in the mid-1800s. In San Diego, the great majority of honey bees foraging in natural systems are both feral and Africanized (an aggressive hybrid of the Western honey bee).
Behind the honey bees’ ability to preferentially target the most rewarding plant species is the fact that they employ social communication to “spread the word” when flowers with rich pollen and nectar resources are available in abundance. Most pollinating insects native to the area are solitary, and thus not capable of such communication.

Native bumble bees made up only 0.2 percent of insect visitors to flowers, perhaps due to competition with honey bees. These findings highlight the importance of considering the honey bee’s unique foraging behavior when evaluating its ecological impact on native species.

San Diego County is considered a global biodiversity hotspot where researchers have documented more than 600 species of native bees, numerous other pollinating insect species and more plant species than any other county in the United States. According to the researchers, the high biodiversity, coupled with the fact that many plant and pollinator species in the region are threatened by habitat loss and climate change, means that any ecological impact of honey bees on native species could be especially consequential.

“There is little doubt that honey bees currently play an important role in pollinating native plants here in San Diego,” said Hung, “but we need to also consider how honey bees may be impacting native pollinators by competing with them for limited food resources.”

The researchers also point out that non-honey bee pollinators are known to increase the pollination success of many crop plants in California and elsewhere, even when honey bee hives are brought to fields by the truckload. So the maintenance of healthy populations of native insects is an important aspect of stable food production.

In addition to possible negative effects of honey bees on native pollinating insects, honey bees may negatively affect native plants as well. Studies in other systems have shown that too many visits by comparatively large and super-abundant pollinators such as honey bees can hinder plant reproduction because of damage caused to flowers. In addition, honey bees are known to visit more flowers on a plant before moving to the next plant than native pollinators. This may increase self-fertilization, which often leads to lower-quality seeds due to the negative effects of inbreeding.

The researchers are now investigating these and other possible ramifications of honey bee dominance in San Diego, although their true impact is difficult to assess since there are no available baseline data from before honey bees were introduced into the area.

“In general, the threats that honey bees may pose to native biodiversity have not been explored very thoroughly, but we are now headed that way,” said Kohn, who first became interested in honey bee dominance while hiking in local wilderness areas. “No matter how far away from agriculture or urbanized areas I was, if something was blooming heavily, it was just swarmed with honey bees. I thought it was odd that there were so many honey bees here.”